A Name, A Person and a Choice 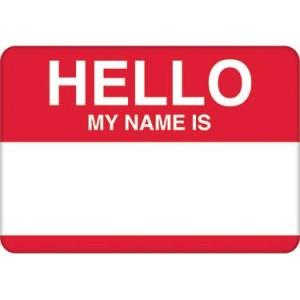 The vocabulary of today’s Liberal is framed in the context of Labels, Mobs and Crowds.

Referring to individuals in the context of their nationality or their religious creed is not inappropriate, but it can become a problem when personal responsibility is intentionally put aside in favor of the assumed “goodness” of the group you’re placed in. At that point, depending on how your opinions line up with the Liberal mantra, either your mistakes are excused as involuntary reactions to a flawed system and you are a victim or, should you embrace the notion that a person is to be held accountable for their actions regardless of their environment, you are cast as a villain and a merchant of fear and hate.

It’s a brilliant strategy in that the individual is never really considered. Rather, it’s the label that has been fixed on to your person and it’s that label that can now be moved around and positioned as a legitimate reason to destroy any institution or ideal that differs from the Progressive mindset.

Your ethnicity is your argument. Your label is your cause. Whatever it is that constitutes an unmet expectation in your life is blamed on a broken system and an unjust legal paradigm. Your diploma, your SAT scores, your work ethic, your morality – none of that is considered apart from the way it can reinforce the legitimacy of your crowd and the desperation represented by your label.

From a Biblical standpoint, you’ve got all kinds of Truth to reinforce the idea of personal responsibility. 2 Thess 3:10 quotes Paul as saying that if you don’t work, you don’t eat. It’s not whether your family or your community works, it’s whether or not you’re working. The most substantial Truth, however, would be the fact that come Judgment Day, it is your actions being weighed and not someone else’s (see 1 Cor 3:13 [2 Cor 5:10; Heb 9:27]).

And it works the other way too.

There are those who lack for nothing, yet are critical of wealth because they’ve never had a job and all they needed to in order to get what they wanted was to simply manipulate the authority figures who provided for them. Hence, all wealthy people are processed, not as creative hard-workers who’ve succeeded according to their industry and ambition, but as a like minded mob who extorted profit from the employee or the customer that was willing to be deceived.

In order to see the world for what it truly is, you have to get beyond Labels, Mobs and Crowds and instead see it in the context of a Name, a Person and a Choice.

Again, Collectives are not necessarily sinister. We are Americans, we can embrace our membership in different organizations such as the military or sports teams that drive you to become more than what you might otherwise be. But however you might be categorized in the context of a nationality, an ethnicity or a particular talent – that group identity can never suffice as a replacement for personal responsibility.

If you claim to be a victim based on your “crowd,” or you would demonize an individual because of the “label” you’re determined to fasten on to them as a comprehensive caption, there is no point to be made unless you can validate your platform in the context of a Name, a Person and a Choice. In other words, your innocence or someone else’s guilt is not defined according to the uniform they wear or the color of your skin. Rather, it is the character and the actions of the individual that is considered first and foremost. Only after their behavior and / or your choices can be validated as something that is beyond reproach are you justified in indicting the system that would otherwise be the focus.

Anytime you hear someone accuse another of a hate crime, or you hear an individual demonize an entire segment of society, challenge them with a Name, a Person and a Choice. And remind them that there’s a word that describes what they’re doing when they assume someone to be either guilty or virtuous based on the Label, Mob or Crowd that they use to justify their perspective…

You Are What You Eat College Entrance Exam Part I (Answers)