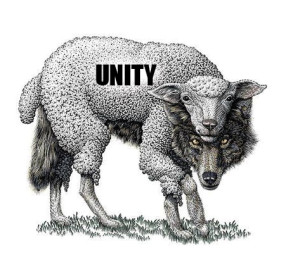 In the first place, I hear that when you come together as a church, there are divisions among you, and to some extent I believe it. 19 No doubt there have to be differences among you to show which of you have God’s approval. (1 Cor 11:18)

What Paul is saying is that while petty conflicts need to be dealt with and dispelled (1 cor 1:10-17), the tensions that come from good and evil factions interacting with one another are not to be avoided as much as they are to be embraced as indicators of what is genuinely True and Just.

Those who want to lump all of the varying opinions that exist within our culture as being morally equivalent to one another are making a huge mistake. Moreover, to long for “unity” in the absence of first evaluating the moral bottom lines that characterize the different parties involved is to risk a tolerance of a toxic element that left unchecked will translate to something lethal (Prov 16:25; Rom 6:16).

In some cases, this is an honest mistake made by those who recognize the utility and advantages of a collaborative environment where everybody’s able to work and exist together peacefully and want to see that sense of friendly community adopted by those on both sides of the aisle. It sounds great on the surface, but at what expense? If the end result is a willingness to allow an evil element to endure, that’s not “unity,” that’s a vulnerability that will prove disastrous in the end.

At what point shall we expect the approach of danger? By what means shall we fortify against it?– Shall we expect some transatlantic military giant, to step the Ocean, and crush us at a blow? Never!–All the armies of Europe, Asia and Africa combined, with all the treasure of the earth (our own excepted) in their military chest; with a Buonaparte for a commander, could not by force, take a drink from the Ohio, or make a track on the Blue Ridge, in a trial of a thousand years.

At what point then is the approach of danger to be expected? I answer, if it ever reach us, it must spring up amongst us. It cannot come from abroad. If destruction be our lot, we must ourselves be its author and finisher. As a nation of freemen, we must live through all time, or die by suicide.

In other instances, insisting on “unity” is an intentional strategy deployed by some in an effort to shut down any honest debate that threatens to reveal the lack of moral substance that characterizes their platform. Dialogue happens only when both parties are willing to converse. The problem these days is that more and more Conservative speakers are being shut down by labeling them as purveyors of hate.  So if there’s not any real dialogue and what content that constitutes an opposing viewpoint to what’s incessantly presented as “fact” is either dismissed or demonized, than what is “unity” if not yet another noble sounding word used to disguise a sinister resolve to silence dissenting opinions?

1 Chronicles 12:32 describes the men of Issachar as those “…who understood the times and knew what Israel should do.” John 7:24 says, “Stop judging by mere appearances, but instead judge correctly.” Put those two verses together and you have a solid “one-two” punch as far as what should be motivating you to be aware of what’s going on in our country politically and culturally.

The bottom line is Truth isn’t gauged by how some facts can be manipulated as much as it’s how all facts are being evaluated. And to arrive at that bottom line you have to be intentional about not succumbing to the pleasant songs of those who long for “unity” when their melody is more often about strategic ignorance and a lazy tolerance than it is a wise awareness and a just response.