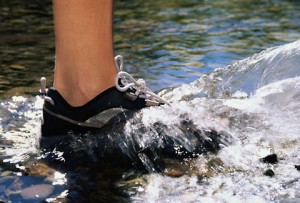 Welcome to Part Two of “Ankle Deep!” We’re looking at a particular passage in Ezekiel – popping the hood to first get an idea of what’s being said and then bring it back around in order to glean from it a call to action for the “here and now” as opposed to the “there and later.” In short, I want to be moving forward and in over my head in order to ensure that it’s a God sized task being done and a God sized life being lived! No room and no time for staying “ankle deep!”

You read through these passages and there’s almost a science fiction dynamic to them – their word pictures are that cataclysmic and that beyond the realm of the normal and the every day.

If the theme of God’s Redemptive Power, Final Judgment and a new and altogether amazing world order was limited to a few obscure passages, it would be easy to dismiss it as figurative language that required no real contemplation.

But Zechariah and Ezekiel are but a few of Divinely inspired individuals who detail, both symbolically and literally, what we can expect to see at some point when God establishes a new Heaven and a new Earth. It’s not a question of “if” it’s going to happen. Rather, it’s a matter of “when.”

Some want to react to the Reality of God’s coming by jumping headfirst into some kind of nuclear winter survival mode. Practical priorities are cast aside and a gaping disconnect is allowed to appear between what is a current reality and what is a forthcoming dynamic.

The fact that God is coming back and these visions of life giving rivers will come to fruition is not our cue to quit living, but rather to be that much more diligent in terms of producing and stewardship. Look at Ephesians 5:15-16:

Given that sense of urgency, as far as being good stewards of the time and opportunities we have before us, let’s go back to Ezekiel’s vision when he’s being led through a river that’s getting progressively deeper.

Where Are You Right Now?

Where are you? Are you “ankle deep?” Are you standing still, or are you moving forward? Are you personifying that verse in 2 Corinthians 3:18 where it talks about how we are being constantly transformed into His likeness with ever increasing quality and intensity, or are you stale, justifying your state with words like “prudent” and “safe?”

Faith never knows where it is being led, but it loves and knows the One Who is leading. It is a life of Faith, not of intellect and reason, but a life of knowing Who makes us “go.” The root of faith is the knowledge of a Person, and one of the biggest snares is the idea that God is sure to lead us to success.

It is not a reckless wager, it is an intelligent risk because the One Who leads me is trustworthy. And when given the option of a safe existence or a fulfilling life, I would rather  live than exist any day.

My success is in “being” obedient. The lepers were healed “as they went.” (Lk 17:14) However others want to keep score or however I want to measure my progress is secondary to simply doing as I’m told and breathing the air of the fulfilled.

But I’ve got to be in over my head if I want the results of my escapades to exceed my own faculties and the explanation for my success to have a Divine tenor about it.

In short, I want to go deep and up to my ankles ain’t gonna cut it.