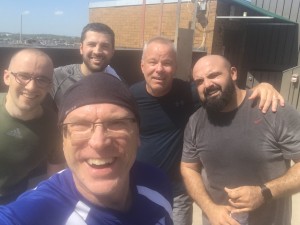 Several years ago, in an effort to supplement my income, I delivered newspapers. Having been a paperboy in High School, I was expecting something similar and in some ways it was, but in other ways, it was much different.

First of all, you have to be up at 2:00 am in order to be done by 5:00 am. The number of papers you have to deliver is usually a couple hundred which significantly more than I had on my route as a teenager and with that number comes a greater chance of accidentally overlooking someone on your route.

And missing someone is more than just a trivial oversight – especially on a Sunday. Usually the customer you missed would call the office and your Regional Manager would be obligated to take you aside and remind you that 100% accuracy was a priority.

I struggled for the first couple of weeks until I came up with an approach that made a huge difference. Rather than counting my papers at the beginning and hope that I had none left at the end, I broke my route down into a series of “legs.” Each leg would be comprised of 15-20 or so stops. I would set aside the number of papers I would need for that particular part of my route and at the end of that leg, I would make sure I didn’t have anything left over and, if I did, it was much easier to figure out who I had missed. It wasn’t long before that approach had my Regional Manager touting me as one of his standouts and it was all because of the way I was able to break things down.

Fitness is the same way.

A lot of times, a person will run out of steam or resolve just because they’re starting out with 200 papers and nine times out of ten, there’s something left over or not being done the way that it needs to be and you just get worn out.

Create daily goals and incorporate incentives for yourself – little rewards to keep you motivated. And don’t overlook what might appear to be insignificant gestures. Even something as incremental as drinking an extra bottle of water or going for a walk during one of your breaks where you need to come up for air – those things can make a difference in the long run and they whet your appetite for more ambitious undertakings when you start to notice your clothes fitting a little more comfortably.

Track your steps today. On Wednesday, make a point of drinking 10 glasses of water. Set aside one meal that represents a departure from what might otherwise be something unhealthy. Start with measurable, doable goals and be able to pat yourself on the back for a “leg” having been successfully accomplished. Break it down, get it done and before you know it, what would otherwise be a lingering item on your to do list is actually being accomplished.