By Your Leave, Sir… 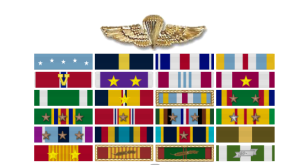 As an enlisted man, when you’re getting ready to pass a commissioned officer from the rear, you salute and say, “By your leave, sir.” He responds by saying, “Granted” and you continue on your way.

It’s an appropriate gesture of respect and it’s expected in the context of what is considered to be military protocol.

While you don’t salute military decorations on an officer’s chest, those ribbons and medals are also worthy of acknowledgement because of the way they reflect courage and character – at least in that moment where the act of bravery represented by that medal actually occurred.

To assume that those same actions translate to an inability to be mistaken, flawed or even criminal is to assume that the valor needed to justify those ribbons on their chest is automatically present in every thought and activity from that moment on.

And that’s not a healthy assumption.

When you encounter a veteran, they’re worthy of your gratitude for their service. And when you meet a decorated veteran, they’re even more deserving because of they’re having risked their lives and made a sacrifice that justifies a salute and a “By your leave, sir.”

But however “proven” a person’s character may be – even in a combat scenario – to assume that they’re impervious to any kind of temptation or incapable of making a bad decision is to deny the fact that they’re human.

When I served, I enjoyed working for combat veterans. Having had to function in an environment where real bullets were whistling overheard, those individuals tended to lead in a manner that was devoid of any kind of drama or political correctness. It was solid, confident and even if you didn’t agree with it, you were more prone to trust their logic given the far greater tensions they had been confronted with in the past.

But I had one run in with a staff non commissioned officer that was a Vietnam War veteran and I wouldn’t have wanted him for a subordinate let alone a boss. He was impulsive, negative, condescending and – in my particular situation – he was wrong. But he wasn’t the kind of individual who would ever admit it, which made his bearing even more disdainful.

My uncle was a decorated WW II fighter pilot, having won the Silver Star as well as the Distinguished Flying Cross. Among the Flag Officers that would later be immortalized in various World War II films, there was one in particular that, while he appeared to be a noble and wise leader in the movies, my uncle had a much different perspective on him because of the way he foolishly put his sailors at risk.

Robert J. O’Neill, the Navy Seal who killed Osama Bin Laden, tweeted, “I wish the left wouldn’t use his uniform to make him a saint. He’s an operative with an agenda.” Similarly, Mark Geist, a Marine who fought at Benghazi tweeted, “Vindman is a disgrace to all who have served. Transcript of his previous closed door testimony he clearly admits to undermining the @POTUS foreign policy and now he has chairman Schiff advising him on how to answer questions.

Vindman Discredits His Service And Uniform With Partisan Testimony

And then there’s Lt. Col. Alexander Vindman, the officer who testified before the House Intelligence Committee as part of the Democrat’s attempt to remove Trump from office. Despite the fact that President Zelensky insisted there was nothing inappropriate about Trump’s conduct, House Democrats proceeded to manufacture a bogus scenario in order to justify impeachment proceedings. Part of their despicable theater was Lt. Col. Vindman, a decorated Army officer who used his ribbons to distract from the fact that his respect for protocol and the chain of command was as unprofessional as it was non-existent. So, while Vindman needs to be thanked for whatever wounds he was willing to endure that earned him the Purple Heart, his conduct and his motives demonstrated as part of the coup to remove his Commander in Chief show that a singular act of bravery doesn’t translate to a lifetime of valor.

General Kelly and General Mattis have impeccable military records. But recently they’ve been very critical of Trump and the MSM has been only too happy to celebrate them as legitimate reasons why you wouldn’t want to vote for him.

But here’s the thing:

Mattis doesn’t want Federal Troops to be deployed against Antifa. He’s denounced Trump as an enemy of “unity.”

Antifa hides behind a noble sounding rhetoric, but in the end they, along with their Black Lives Matter counterparts, are not asking for unity or equality. Their actions demonstrate a desire for immunity and a commitment to destruction: Immune to the consequences of bad decisions and determined to destroy the very paradigm that gives them the right to protest. Furthermore, many of the areas where these thugs are allowed to flourish are run by Democratic leadership who seem willing to put their own constituents at risk both financially and physically all for the sake of making the White House look bad.

Kelly has been critical of the President for some time. But his bias is hard to ignore when you consider how at one point he said that anyone who favors Fox News is not an informed citizen. So, what does that imply, as far as those who favor the MSM? Furthermore, his indictments, according to White House Press Secretary Stephenie Grisham, seem “disingenuous,” given the fact that she was with in the room when he backed the President on issues that he now criticizes.

Marine Corps Major General Jim Livingston, a Medal of Honor winner, recently joined 8 four star generals and a total of over 200 retired senior military officers to endorse Trump. Thing is, you have to “dig,” to find that information. The MSM is going to trumpet anything and anyone they can find to promote the idea that Trump is a fool and a fiend. Anything that supports something to the contrary is going to be demonized as either irrelevant or unreliable.

His accomplishments are rarely discussed. Rather, it’s his supposed lack of character and the attacks have been ruthless. The bias and the overall lack of integrity on the part of the media is rampant as evidenced by the recent article published by The Atlantic (and quickly reprinted in almost every major news publication) that claimed Trump referred to the buried American World War I  soldiers in France as “suckers and losers.” Suspiciously validated by four “anonymous” sources, this claim has been refuted by no less than 20 Witnesses who were present at the time this comment was supposedly made – which was two years ago, by the way.

Ribbons and Medals are worthy of respect. But just because you’ve been decorated doesn’t mean you’ve been granted a status of immunity when it comes to succumbing to bad influences or the tendency to make bad choices all on your own. Furthermore, a decorated vet isn’t necessarily representative of every decorated serviceman when it comes to one’s mindset and perspective. However the press, or any institution for that matter, wants to imply that one combat veteran’s opinion is either symbolic or superior to any other serviceman’s outlook is to overlook:

A salute, a grateful disposition and respect for a selfless act…absolutely! But to respond with a “By your leave, sir!” when confronted with a half truth, a hidden agenda or something immoral?