I Can’t Find My Keys 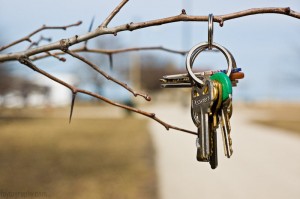 They can be the most exasperating little “jingle” in your pocket. They’re always there when you’re not looking for them, but woe to the person who’s in a hurry and can’t find them.

Recently, I was having a bad day. Nothing especially dramatic, just a lot of little irritants subconsciously building up in a way that I wasn’t even aware of.

I was headed out of the house, on my way to go get something done and I couldn’t find my keys.

At first, I’m just absentmindedly walking around the house, thinking about the myriad of items on my “to do” list that hadn’t gotten done, while simultaneously looking for my keys. After a few minutes, I’m still coming up with nothing and now The Keys are center stage in my thinking.

Of course by now, it’s not just “the keys.” The Keys now represent everything that hasn’t gone right and everything that I’m now confident is teetering on the precipice of epic failure. I’m angry, I’m not a nice person to talk to, I’m obviously preoccupied with things that have nothing to do with my keys. But still…

Amused and Amazed by an Avalanche of Stuff

I’m not sure when it was that I was able to pull back enough to appreciate the unwarranted amount of passion being poured into the dilemma of “missing keys,” but when I did, I found myself both amused and amazed.

How is it that something so insignificant in the grand scheme of things could get me to a place where, had someone been in the house at the time and said the wrong thing, I probably would’ve responded inappropriately? How does that happen?

Thankfully, I was able to have my little hissy fit all by myself and no one was the wiser when I unlocked my car and made my way to wherever it was that I was going. While I was glad that I was able to do my mental frogger splats in a manner where no one could see, I wanted to capture this moment and really look at it.

It wasn’t just my keys, it was a avalanche of “stuff” that was poised on the threshold of sweeping down the mountain of my disposition and burying me beneath a mound of unmet expectations. All it took was some missing keys and here it comes!

It’s no small task to think rationally when you’re angry. Perhaps that’s why Proverbs 16:32 makes so much of the man who is slow to anger:

Whoever is slow to anger is better than the mighty, and he who rules his spirit than he who takes a city. (Prov 16:32)

“Anger” in and of itself isn’t a sin, but it can cause you to sin and that’s why you want to be on top of your spiritual game so you’re not blindsided by something as incremental as a set of keys (see 1 Peter 5:8).

Especially given the way outbursts can short-circuit rational thought processes, you want to make sure you stay well within your emotional threshold by truly processing what’s happening and not simply reacting to what’s happening. For the believer, when you’re processing things, you have the option of bringing into the conversation the Purpose, Peace and Power of the Holy Spirit and that’s going to make a big difference.

Because I’m not limiting the things that have a bearing on my situation to only that which I can see and control. When I think of God’s Purpose, I’m recalling that He works through all things – even that which is inconvenient – to move me along the path that I need to be traveling. When I think of His Peace, I’m positioning all of what “might happen” beneath the umbrella of His Sovereignty and at that point I’ve got a good reason to be optimistic. And when I consider His Power, I remember that I have access to a Divine Capacity for endurance and patience and I’m not restricted to a personal threshold.

There’s a lot of great things that can happen today and I don’t want to miss any of it! However “understandable” or “natural” it may be, I have neither the time nor the desire to disqualify myself from those possibilities that would otherwise be in place by keeping all my King brings to the table at an arm’s distance and letting my emotions rule the day.

While I may not be able to locate the keys that start my car, I do have the “keys” to an even disposition and some sound thinking. Thankfully, I don’t have to look for those. All I need to do is use them…

…and I believe I will.

A Tapestry of Tiny Streets Financial Planning When You're Not, You Don't, You Can't and You Won't