Chick Fil A and the Great State of Texas 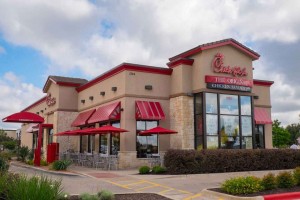 Texas Governor Greg Abbot recently signed into law a provision that would prevent the government from taking unfavorable action against a business or person for contributing to religious organizations. This action coming after the city of San Antonio airport recently blocked a Chick Fil A restaurant from opening a location at the city’s airport, citing the company’s support of traditional marriage as discriminatory and therefore unwelcome.

If tolerance and equality was truly the impetus for San Antonio’s actions, then Chick Fil A would be allowed to open a location at the airport right alongside a restaurant that was flying a Gay Pride flag. But “equality” is not the basis for their complaint as much as it’s a scheme to silence any convictions save their own.

I’m not going to play drums in a band for a homosexual wedding. Then again, I wouldn’t expect a lesbian to buy candy being sold by a student who’s trying to generate money for a mission trip. I’m not going to compel you to participate in a Christian fund raiser any more than you should feel justified in forcing me to support something I don’t believe in.

That is freedom of religion manifested in the context of commerce. It’s not whether there’s a copy of the Ten Commandments posted in a school hallway or whether there’s a Gay Pride flag flying from the window of a local business. That is your right and that’s part of what makes our country both unique and noble.

But that’s not the perspective of the LGBT community.

They want to eliminate any reference to something that makes them feel uncomfortable, and they will propose any kind legislation to get it done and they will veil their true motives behind words such as “tolerance, “fear” and “hate.”

Fox News reported that State Rep. Jessica Gonzalez, a Democrat, said the bill was a personal insult given she is openly gay, DallasNews.com reported.

“Of course this bill is aimed at me,” she said. “It’s about reminding those of us who have never belonged not to get too comfortable.”

Hey, Jessica. How do you suppose everyone else “feels” when they’re being told they have to bow down to your immoral idol simply because “you’re uncomfortable?”

Stop insisting that the world must be devoid of anything that “reminds you” you’re that you’re different. You are different and that’s your choice. I’m not going to strip you of your right to be “different,” but I expect the same Constitutional courtesy in return. Otherwise, you have a situation that’s not Constitutional, it’s not tolerant, it’s not just and I’m emailing the governor’s office this morning and offer him a free #1 combo for his willingness to stand up to something that is as bogus as it is toxic.

And as an aside, feel free to compare the way Fox News reported this and the way CNN reported it. It’s not blatant, necessarily, but the CNN piece definitely defends the LGBT platform by ending with a comment from Ron Nirenburg, the mayor of San Antonio.

“There are many people in the community that are uncomfortable with Chick-fil-A,” Nirenberg said. “And I would ask you, have you ever tried to buy waffle fries on a Sunday? They’re closed. Fifteen percent of sales generated in the airport come on a Sunday.”

It’s yet another subtle slam against Chick Fil A, as far as the fact that they’re closed on Sunday. At first glance, it would appear that Chick Fil A is not only prejudiced against homosexuals, but it’s also a drain on the airport’s economy. But it doesn’t mention how Chick Fil A makes more than Subway, McDonald’s and Starbucks combined despite the fact that they’re able to do that in six days a week whereas every other one of the aforementioned franchises are open seven days a week. Nor does the article mention that the LGBT community makes up only 3.6% of the state’s population.  One more example of how you’re doing well to look beyond the headlines in order to ensure your convictions are genuinely informed and truly accurate.

What If It Never Happens? Muscular Christianity T-Shirt and Book Special Offer!