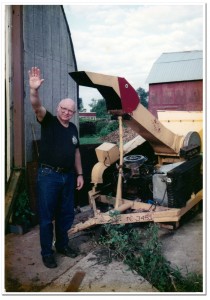 When it came time to select the “best man” for my marriage ceremony, the choice was an obvious one.

I don’t know when I had determined to ask my dad, but in the printed wedding program I offered a short explanation by saying he was the “best man that I knew.”

Anytime I encounter a person who has lost their father, I tell them the story you’re about to read. This captures a portion of what made my dad so special. It was the wisdom he taught coupled with the example he set that made him “my best man.”

It was the first part of November in 1990. I had recently been discharged from the USMC with close to a decade’s worth of service. I had spent the more than half of that time going to night school anticipating the day where I would be a civilian once again and needing a marketable skill in order to make a living. Working for the government has its perks, one of which being a consistent income and launching into the civilian work force was more than a little daunting when you have no job and no real idea of what to expect.

What made my dynamic even more subjective is that while I had a degree, I had determined to try and make my living as a musician. On the day of my discharge ceremony, my father was present, having made the trip from upstate New York. After the awards were distributed and hands were shook, Dad and I loaded my stuff into my car and made the trek from Virginia to Nashville, Tennessee.

We drove to my cousin’s house and decided that I would set up shop there for the time being. Sharon’s home was in need of some minor repairs and Dad, being the consummate handy man, volunteered to get those things done while I settled in.

At one point, he needed to head to Home Depot to get some materials and I accompanied him with the idea that we would load up what we purchased and I would head back to the house to finish the work he had started. Dad, on the other hand, would get in his car and start the 10 hour drive back to Hilton, New York.

As we finished loading up my car with what we had just purchased, Dad and I got ready to say “good bye.” I mentioned to him that this was “it” and he looked at me asked what I meant by that. I told him that front this point on, once he was on his way back home, my “journey” was officially beginning. Financial security, succeeding as a musician, establishing a community of friends – all of these things were unknowns and I confessed to him that I was a little intimidated.

I don’t know what I expected to hear from him – perhaps some kind of pep talk with phrases like “You can do it” or “You’re ready.” Instead he just looked at me and said “That’s why I raised you.”

That’s Why I Raised You

That may not resonate with you like it did me. But what I heard him say with that four word response was that he had prepared me in the way he had brought me up and this wasn’t the time to feel either overly anxious or melancholy. Rather, it was the time to get busy and put into action the values and the work ethic he had taught me.

Frankly, I’m not sure if he could’ve said anything more encouraging. This wasn’t the time to be dwelling on the “what if’s” or the “I’d rather’s.” Instead, I was now mentally rolling up my sleeves with a resolve to move forward.

Several years later, that conversation would come back to me as I was wiping the the tears from my face at my father’s Memorial Service. He was sixty years old. After a year in the hospital, waiting for a new heart and then battling the difficulties that sometimes accompany a heart transplant, his body had given out and we were now remembering the life of David Gust.

My grief was what you expect as far as a son trying to emotionally process the loss of his father. While some can spend a long time recovering from the death of a parent, I was able to better process things because of the memory of a conversation we had in the Home Depot parking lot.

A Legacy of My Own

In my mind, I heard my dad say that to me once more as I was contemplating how I would never see him again this side of Heaven. This time, however, it wasn’t so much about pursuing my dreams as much as it was taking the baton he was now handing to me and honoring his legacy by being the “best man” that I could be as a husband and as a father.

I still miss my dad. There’s times I wish I could talk to him and get his perspective on different things. I can imagine him laughing at my jokes, celebrating my triumphs and breathing into me the kind of encouragement that’s required when you’re headed in the wrong direction.

But anytime I teeter on the threshold of something resembling an overly emotional disposition as I long for my father’s presence, I can hear him say “That’s why I raised you,” and I’m back at it – determined to be the man he raised me to be and inspired by the thought of seeing him again and being able to honor him with a legacy of my own.