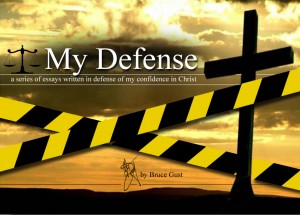 Here’s one of several “defenses” that I wrote as part of an imaginary conversation with someone who’s skeptical of the Christian faith.

The challenge is to sound compelling by using verbiage that doesn’t sound like a collection of overused “Sunday School” cliché’s. Not that there’s anything wrong with that, it’s just healthy, I think, to try and communicate using words that have to be crafted rather than merely regurgitated. At least, that’s part of the enjoyment I get out of hashing these things out.

Christ is so much more than just a tradition or a psychological add on to assist in bolstering what would otherwise be a frightened disposition or a defeated attitude.

Those who dismiss Him as a pointless collection of mythical stories or a cute little regimen that has no real practical worth are overlooking an obvious Truth that philosophers can’t provide and scientists can’t explain.

Apart from a Divine Absolute, the human experience is based on a paradigm consisting of things that are destined to die, quit or change. Happiness is based on circumstances, peace is transient and power is revealed as insufficient when confronted with things that go beyond a human’s ability to control.

It’s not a vague Divinity that a born again believer subscribes to. Rather, it’s a specific address in history, a unique Personality that distinguished Himself by claiming to be God as opposed to a mere messenger.

He offers Himself as that which fills every psychological gap, every spiritual insufficiency and every physical shortcoming.

Your sense of purpose, peace and ability is in direct proportion to the extent you pursue Him and yield yourself to the Strength and Perspective He offers.

Those who disagree  limit themselves to outrageous mathematical values, impractical philosophies and hollow inspirations.

He is the difference between living and existing, prospering and producing, real success and epic failure. “Unless the Lord builds the house, its laborers labor in vain.” (Ps 127:1)

I believe that there was a generation of Israelites who could tell you what the sand felt like on the bottom of their feet as they walked across the Red Sea on dry land. I believe that same generation would not be able to tell you what God’s Presence hovering over the Tabernacle looked like at night without the expression on their face changing. I believe the disciples never got over the experience of seeing Christ alive for the first time. And I believe that every one of the five times that Paul was flogged, he closed his eyes and remembered the sound of Jesus’ Voice calling out to him on the road to Damascus.

He’s real. And He doesn’t simply make a difference, He is the difference. Benjamin Franklin said as much to the Constitutional Convention during a time when it was doubtful the assembled delegates would be able to reach a consensus on how our government was to be structured.

I have lived, Sir, a long time and the longer I live, the more convincing proofs I see of this truth — that God  governs in the affairs of men. And if a sparrow cannot fall to the ground without his notice, is it probable that an empire can rise without his aid? We have been assured, Sir, in the sacred writings that “except the Lord build they labor in vain that build it.” I firmly believe this; and I also believe that without his concurring aid we shall succeed in this political building no better than the Builders of Babel: We shall be divided by our little partial local interests; our projects will be confounded, and we ourselves shall be become a reproach and a bye word down to future age. And what is worse, mankind may hereafter this unfortunate instance, despair of establishing Governments by Human Wisdom, and leave it to chance, war, and conquest.

I therefore beg leave to move — that henceforth prayers imploring the assistance of Heaven, and its blessings on our deliberations, be held in this Assembly every morning before we proceed to business, and that one or more of the Clergy of this City be requested to officiate in that service. (Benjamin Franklin’s speech before the Constitution Convention on June 28, 1787)

His Strength, His Direction and His definition of Success. That’s the stuff of life and nothing less.

What is "Muscular Christianity?" The Best Workout Plans - What Makes Them the "Best?"