Jim Acosta and Freedom of the Press 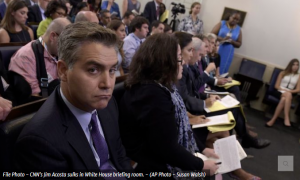 The standard dictionary definition of “freedom” is, “the state of being free or at liberty rather than in confinement or under physical restraint; exemption from external control, interference, regulation; the power to determine action without restraint.”

On the surface, that may appear to be true. But that definition deployed in the absence of wisdom can lead to a perceived licence to do whatever you want without fear of any kind of consequence. Nowhere do you see this more vividly played out than in today’s application of “freedom of the press.”

Freedom of the press means, “the right to publish newspapers, magazines, and other printed matter without governmental restriction and subject only to the laws of libel, obscenity, sedition, etc.” In other words, the government cannot intervene and prevent you from saying something, apart from some verbiage that represents something illegal in the context of treason, libel (unjust assault on someone’s character), vulgarity, etc. What it doesn’t mean is that you can justify endangering, insulting or offending someone by saying that you’re a journalist and then hiding behind the Bill of Rights claiming that you can say whatever you want and not be held resonsible for the backlash.

The liberal press has been assaulting the character, the performance and the verbiage of President Trump ever since he took office. Not only that, but they’ve targeted his family as well as anyone who works for him including Sarah Huckabee Sanders.

She’s the first Press Secretary in American history that requires Secret Service protection because of the threats that have been leveled against her largely due to the way the media characterizes her.

Rose O’Donnell speculated that Barron Trump is Autistic, the Daily Mail reported that Melania Trump was an escort in the 90′s (they wound up paying 2.9 million dollars in a lawsuit that they lost). Trump himself is constantly demonized and minimized and when he fires back, the reporters respond with a superior kind of indignation, as though they’ve been slighted and the reputation of the press is at stake.

Jim Acosta is one such individual. Take a look at this exchange:

ACOSTA: Is that true, Mr. President?

PRESIDENT TRUMP: I want them to come in from everywhere — everywhere. Thank you very much, everybody.

ACOSTA: Just the Caucasian or white countries, sir? Or do you want people to come in from other parts of the world?

The last question is so obviously bogus, yet Acosta throws that it out there…

No doubt, depending on your political bent, you might justify Acosta’s rationale in a manner that might sound vaguely academic. But in the end, it’s obvious he’s simply looking for a way to malign Trump. This is why the substance and the integrity of the liberal press and the Democrat party is so anemic these days. They don’t have a platform other than to remove Trump and the means by which they would facilitate that is…

If it were coming from a Middle School yearbook team, you could say its childish. But its not coming from the perspective of a group of seventh graders. It’s coming from a community of liberals who will use words like “freedom” and “justice” and “compassion” knowing that, by default, those words will solicit an emotional response regardless of the subject matter. And it’s because of the way in which those words will position a person’s passion that it becomes fairly easy to promote ideas and campaigns that are fundamentally flawed and, in some cases, devoid of anything ethical, dignified or respectful.

My father used to say that with every freedom comes a responsiblity.

And I would add that when you’re contending with someone who refuses to take responsibility for the things they do beneath the umbrella of the freedom they proclaim, or refuse to wield that freedom in a responsible manner, while it may still be a freedom from a legal point of view, it is now nothing more than a weak attempt to absolve yourself of any sort of blame or consequence your words may precipitate.

And that is what “freedom of the press” has become, at least as far as the way the liberal media would use it as the foundation upon which they would build the narratives, the offenses and the character defamation they would categorize as journalism.

As an aside, here’s a partial list of the violence that has been directed towards Trump supporters as a result of the way the media has characterized anyone who supports Trump as a Nazi, Racist, Sexist or whatever title can be seized upon in order to destroy his administration.
The NFL Protesters - You Are Not Brave... Why?