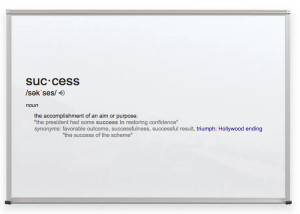 I was stoked! I was listening to an excellent teacher deliver a sermon on the discipline of meditation. He elaborated on the word “hagah,” which is the Hebrew word for “meditate” as it’s found Joshua 1:8:

Keep this Book of the Law always on your lips; meditate on it day and night, so that you may be careful to do everything written in it. Then you will be prosperous and successful. (Josh 1:8)

While it’s interpreted as “to meditate,” it also is used to describe the contented growl a lion makes as it consumes its food.  The idea being that you’re not just studying content as much as you’re enthusiastically embracing what you perceive to be something that’s going to make a huge difference in the way you process yourself and the world around you as well as in the way you perform.

I had memorized this verse a while back and when I first came in contact with it as something that immediately resonated as a Biblical mandate to pursue a standard of excellence in all things at all times – something that’s reinforced throughout the Word of God.

And what’s so motivating about all this is that when you make a point of ensuring that everything you do, think and say merits the Divine Stamp of Quality that we’re all commanded to strive for, the benefits are both practical and profound.

The ability to produce wealth comes from God (Dt 8:18). The wisdom necessary to keep your priorities in line (Matt 6:33), to administer, to lead, to prosper and succeed – all of this comes from God.

Some might want to argue that there are plenty of examples of individuals who have done very well for themselves and could care less about Christ. But their success still comes from God whether they want to acknowledge Him or not (Job 21:16-17; Ps 73; Prov 21:1; Dan 2:21). And however they may seem to have it going on, theirs is a house of cards measured by a collection of goal posts that never stop moving (Ecc 5:10).

But here’s where it can be both disappointing and frustrating.

The speaker’s content is building to a crescendo and he’s got the attention of most of the males in the room right up to the point where he qualifies Joshua 1:6 by saying that by mediating on God’s Word you’re able to realize…

The military strength of David and Gideon? The sanctified pleasures described in the Song of Solomon? The status, position and abilities of Joseph? The ability of Christ to stare down an entire mob determined to kill Him (Lk 4:30)? The craftsmanship of Bezalel (Ex 36:1)? The money making work ethic described in Matthew 25 (see also Dt 8:18)? The kind of talent that earns you the attention of kings (Prov 22:29)?

But what does the speaker say?

He says we meditate on Scripture in order to realize…

At that point, most of the guys in the audience that probably exceeded a couple thousand people all checked out.

A lot of times, “God’s definition of success” assumes a life that resembles the caricature of Christ Who is portrayed as a celibate pacifist who is broke, weak and quiet.

Rather than acknowledging Him as the Creative Agent that invented romance and intimacy (Gen 1:27-28; Col 1:16), it’s assumed that because Jesus didn’t have a wife and a family, celibacy therefore equates to righteousness. You may be more independent than someone who is unmarried (1 Cor 7:32-38), but you are not more righteous than your married companions. And while Paul provides a biblical endorsement for those who choose to be single, both Genesis and Song of Solomon makes it abundantly clear that a healthy marriage is a Divine Institution and sex is something that God created as something to enjoy in the context of healthy relationship between a husband and wife.

Industry, creativeness, ambition, wisdom – these things were deployed by multiple individuals throughout the Scriptures and the result was both profitable and profound. Making money only becomes a problem when profit takes precedence over Principle. The Bible tells of numerous individuals who were wealthy. Piety is not synonymous with poverty any more than abundance equates to corruption. When Christ said, “Blessed are the poor,” He was not congratulating those who were impoverished, nor was He suggesting that a nominal income was something to be pursued. He was assuring that those that society had labeled as cursed because of their meager cash flow were just as qualified to receive the Kingdom of God as their wealthy counterparts. The bottom line is, and always will be, obedience (Josh 1:8; Dt 28:1-14; Rom 12:1-2; Col 3:23). When your commitment to excellence is based on your work environment and / or your paycheck, your performance is subject to fluctuate should either one of those dynamics prove to be less than inspiring. But when you’re looking at your Redeemer as the One who both justifies and empowers your personal best, the results are both consistent and substantial – the kind of results that motivate employers to promote to a position of greater influence and with that greater compensation.

No, Jesus didn’t fight nor was He here to lead an armed rebellion. But His Purpose was to destroy the thing that prevented mankind from being able to rate the perpetual favor of their Creator. To do that, He had to voluntarily and willingly submit to a death that was as excruciating as it was humiliating. He had access to the military of Heaven and would’ve been both Just and Moral had He chosen to use it (Matt 26:53). Violence is only wrong when it’s deployed in the context of something sinister. When it’s utilized to either protect or advance something noble, that’s heroic and you see that throughout the Word of God.

Wealth, Violence and Sex are all well within the sphere of godliness when they’re engaged according to a holy paradigm. They can be easily twisted, however, into something dark and even lethal. While it’s easier to adopt a legalistic approach and dismiss them altogether as sinful, that is not the approach that is expected in the context of a saving relationship with Christ (Rom 8; Titus 1:15). We have both the responsibility and the privilege of recognizing the opportunities represented by being obedient. God’s definition of success is not a specific dollar amount or any one particular victory as much as it’s a mindset that looks beyond tangible trophies in order to live out a holy existence that facilitates the character and the ability that produces BOTH spiritual maturity and material blessings (Matt 6:33; Jn 10:10).

Christ is not a means to an end. He is the Filing Cabinet and not one file folder among many. Nor does He represent a “spiritual” line item that somehow cancels out the consequences of poor decision making. He is, rather, True Muscle, True Love and True North.