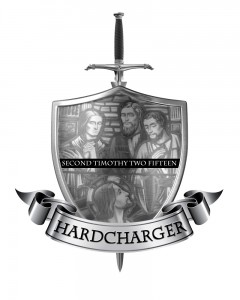 In the USMC, “hardcharger” was a term you used to describe someone who was motivated. They were constantly striving for excellence and all the while being the kind of person you wanted to either work with or work for.

They had an energy about them that got you fired up. You enjoyed just being in the same room with them because of the way they effected the disposition of those within the sphere of their influence.

I came across several “hardchargers” during my nine years in the Corps. Master Sergeant “Top” Harris was a Vietnam vet with two purple hearts. Catalog Marine. When he gave the command, you snapped to attention and there was a part of you that took pride in working for an individual that had earned the right to light you up based on his combat record as well as his personal example.

Sergeant Major McGuirk was another Vietnam war vet. Personal decorations that extended to his collar bone. What made him so memorable was his perpetually cheerful demeanor. I remember standing outside as he came by and said, “Morning, Marines! Hope you’re doing good. Terrible day to be pissed off…!”

Then there was Sergeant Major Kellogg. He had earned the Medal of Honor as a Sergeant by using his body to shield his squad from the blast of a grenade. Although he was enlisted, you still saluted him as is the case with all Medal of Honor winners. What made his situation especially inspiring is that he was the only Sergeant Major in USMC history beside Dan Daly that had won our nation’s highest honor. I still get chills as I recall “sticking” my salute as his car drove by.

And there were others. Top Mike, Petty Office Dunaway, Major Croswell, Gunnery Sergeant Burd. And it’s not limited to the military. “Hardchargers” are everywhere, but while they’re not exclusive to any one walk of life, they’re not especially common.

You have to wired in a special way. It’s not something that can be quantified entirely, but the one characteristic that is consistently present is passion. It has to be complimented with a sense of humility and integrity. There also has to be an authentic commitment to the welfare of others, but “passion” is the underlying quality that gets your attention and makes you want to listen. The other virtues will “keep” your attention, but what initially gets you in a place where you’re positioned to be influenced and enriched is the sense of excitement these people bring to the table.

Pause of a minute.

In the early 1900′s, the percentage of boys aged 12-18 who chose to dismiss church as an unnecessary and irrelevant practice was 60-80 percent. 1 It seems that contemporary Christianity has always been challenged when it comes to presenting a relationship with Christ as being practical and not just profound. As a result, Christianity becomes regulated to something either academic or mystical – either way it’s processed as a three hour chore to be performed every Sunday as opposed to an every day paradigm that translates to an ever increasing collection of advantages over those things that would otherwise have you existing rather than truly living.

When you take a look at Christ as He truly was and is, you have the Ultimate Hardcharger. Don’t hear that as a segue into something “theological.” I have no trouble processing my Savior as as Personality worthy of my respect and admiration as well as my reverence. Go with me…

I aspire to individuals who carry themselves well. Theirs is a physical bearing that communicates an appreciation for discipline and a familiarity with hard work. In the Marines we were taught to speak with a command tone to your voice when tasked with directing others and you were to always lead by example. “JJ DID TIE BUCKLE.” Leadership Traits: Justice, Judgement, Decisiveness, Integrity, Dependability, Tact, Initiative, Enthusiasm, Bearing, Unselfishness, Courage, Knowledge, Loyalty, Endurance. Jesus had all of that.

And while the common “picture” of Christ is a frail, blue-eyed whisper of a man, it’s laughable when you try to reconcile that image with 30 years of hard, physical labor as a carpenter and the capacity to endure six hours on the cross before passing away – and that after being beaten and flogged. I’m not trying to suggest that Jesus was an action hero or a fitness model. What I am trying to do is strip away the tradition that insists on a Christ figure with perfect skin, a delicate bone structure and a voice perpetually accompanied with soft singing and a professional string ensemble.

Is the physical appearance of Jesus an issue? No. It’s His Identity and His Message that needs to be the focus (Is 53:2-3). But while there was nothing majestic about His look to the point where people were inclined to conclude He was Divine, that’s not our cue to assume a lack of discipline (gluttony [Dt 21:20; Prov 23:21]) or a pasty physique (sluggard [Prov 21:25; 24:30-34]). Look at Christ as He’s playing with the kids (Lk 18:16) but don’t try to “edit” Him when He’s driving out the money changers in the Temple (Jn 2:12-25). Hear the approachable nature in His Voice as He’s delivering the Sermon on the Mount (Matt 5:1-10), but hear His Authority when He refers to the Pharisees as a brood of vipers (Matt 12:34).

Bottom line: Recognize that every admirable trait you could possibly appreciate in someone you look up to was authored by God. And when we’re commanded to imitate God (Eph 5:1), we’re being admonished to be “hardchargers.” Think about it! The Fruits of the Spirit (Gal 5:22-23), the attributes of godly wisdom (Jas 3:17) – those are the foundational attributes that qualify an action as truly heroic. Those are the characteristics that certify one’s actions as virtuous and not just commendable. The Leadership Traits encouraged by the Marines? When the wisdom you’re deploying has as it’s philosophical starting point a fear of God (Prov 9:10), everyone of those traits is manifested in its purest and most effective form.

The term “Christian Solider” is often used to describe someone who is putting points on the board more so in terms of theological values than practical gains. And that’s part of why society sometimes has a quizzical look on their face when confronted with someone who excels in the marketplace and is also born again. But that shouldn’t be the case. God never restricted His Resources for tragedies and crisis situations only, nor was His Lordship designed to be one file folder among many. Rather, He’s the Filing Cabinet and the whole of life is to processed from a position of Divine strength and a sanctified sense of Purpose (Is 41:10; Phil 2:13).

That’s the quintessential hardcharger, right there!