How the Pyramids Evolved From Three Individual Stones 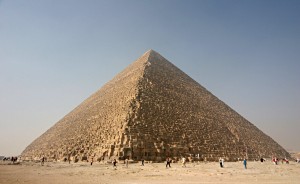 Dr. Roger Davidson Steele is a brilliant archaeologist and is a professor on staff at the University of Birmingham in New York. He recently submitted some brilliant theories as to the origin and construction of the pyramids that are as profound as they are unique.

In order to appreciate his theories, it’s healthy to revisit some things about the pyramids that aren’t necessarily common knowledge.

While there are several pyramids scattered throughout the world, the most popular and, perhaps the most impressive, is the Great Pyramid located in Giza, Egypt. The Great Pyramid is actually one of three pyramids…

How these pyramids were built is still a mystery to contemporary archaeologists and engineers. To make the quandary even more intriguing are the theories that make for a very compelling case that they were used to harness the electrical properties of the earth’s geological core.

Their construction and their purpose may very well have been answered by a recent hypothesis submitted by Dr Steele who suggests that each of the pyramids are actually a result of an evolutionary process that began with a single stone.

His theory is that each of these three stones, over a period of millions of years, transformed and became capable of reproduction and precise construction ultimately resulting in the pyramids that we see today.

Evolutionists around the world are applauding Dr. Steele for what represents a monumental form of validation for Darwin’s theory of Evolution and the way in which it can be observed and now proven…

Dr. Roger Davidson Steele is a fictional character and while there is a University of Birmingham, it’s located in England and not in New York. The theory of the pyramids evolving from a single stone is bogus, but it illustrates just how ludicrous it is to suggest that something as precise as the architecture and the construction of the pyramids could be something that came about by chance. It was “built.” It did not merely “appear” or “evolve” over the course of millennia.

Yet, while it’s easy to recognize the obvious fallacy of believing that a pyramid could be formed by forces of chance, many are willing to accept that a human being – something that is infinitely more complex and transcends the physical and includes the emotional and spiritual as well – this is accepted as legitimate science.

In this illustration, we start with a single stone. Richard Dawkins, author of the book, “The God Delusion,” takes it a step further and insists that life started from nothing. He says, “What I can’t understand is why you can’t see the extraordinary beauty of the idea that life started from nothing – that is such a staggering, elegant, beautiful thing, why would you want to clutter it up with something so messy as a God?”

Perhaps because unless your starting point is an Intelligent Creator that exists outside the boundaries of Time and Natural Law, you have something as preposterous as a pyramid evolving from a single stone.

Because of the Constitution, Not in Spite of It Break It Down!