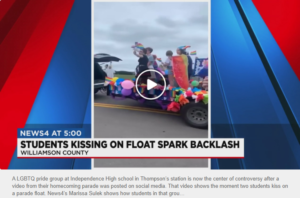 So, here’s what happened:

The “Gay Pride” Club at Independence High School built a float that was featured as part of the Homecoming parade that drove around the High School, down 31 and then made a lap around Heritage Elementary and Heritage Middle School.

It’s a big tradition and the Kindergarteners along with the Grade Schoolers are allowed to sit outside and watch what amounts to a big parade coming close enough to where those who are on the floats can throw candy and wave hello.

But at one point, two of the individuals on the “Gay Pride” float kissed…

Some saw that and felt an overwhelming sense of disgust and threw a fit. Others saw it as a sign of the times and, while they don’t agree with the homosexual lifestyle, accept it as a hill that’s not worth dying on because, after all, everyone has the, “…right to be happy.”

You can watch the clip and read the article by clicking here.

It’s a volatile discussion, but there’s a key element that often gets overlooked that’s worth considering because in the end, there’s a lot more at stake than a person’s right to be happy.

The real question is: Who Makes the Rules?

I) It’s a Strategy

First of all, the manner in which the Homosexual Agenda is advanced is done according to a strategy that’s characteristic of someone who has something to hide more than they have something to say. The moment you hear elements of that strategy being deployed, you can rest assured that what you’re hearing is not meant to champion the truth as much as it’s intended to distract from it.

Typically the Homosexual Activist positions themselves as a victim of a cruel and intolerant society that’s determined to prevent them from being able to exercise their right to be happy.

However that may or may not be the case, the fact that you can’t be critical of someone who’s in pain without immediately being labeled as insensitive and inappropriate is a handy tool in the hands of someone who needs to avoid those questions that have the potential to reveal their argument as being weak apart from a controlled collection of polls, pictures and personalities.

In this case, the issue isn’t whether or not the Homosexual has the right to be happy as much as they have the authority to redefine Moral Absolutes.

That’s the question on the table. And that’s why it’s necessary to frame the entire conversation around the “victim,” because otherwise it becomes too obvious that there’s a resolve to either manipulate or dismiss the Bible in a way that’s neither accurate let alone appropriate.

That’s why characterizing those who have a problem with Homosexuality as being guilty of “fear and hate” can be so effective because now you can divert attention away from what the real issue is: 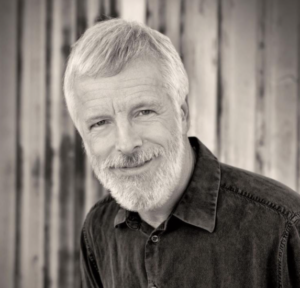 II) Who Makes the Rules

You’ve got one of two options: Man or God.

Granted, for some, there’s a lot to unpack there. But the point is this: It’s not about a person’s “right to be happy.” You can conceivably assert that as a way to justify almost whatever you want to do.

The question is, “Who makes the rules?”

And while that’s not a question people want to entertain in the context of a Homecoming Parade, that’s the other piece of this that makes this whole campaign so diabolical.

By positioning their agenda in the context of something that is traditionally processed as healthy, patriotic or philanthropic, they compel those who would otherwise object to be silent because of the way any criticism will come across as inappropriate given the obvious noble nature of the event.

…then regardless of the event or the situation, we’re now looking at a completely different issue.

A) It’s What You Do Believe

However passionate or dogmatic a person may be in insisting that God has no place in a civilized conversation pertaining to morality, it’s not about what you don’t believe…

…it’s what you do believe.

There is a “god” in this equation – there is someone who’s calling the shots and defining the standard that you deem acceptable.

And it’s one of two people.

It’s either the God Who created the heavens and the earth and validated His Identity by dying and coming back to life, or…

…the person who’s staring back at you in the mirror every morning when you wake up.

B) There’s No Such Thing as an Atheist

Atheists want to be perceived as having an impartial approach to the various faiths represented by the American population by insisting on a “religion-less” perspective on morality.

But there is no such thing as a “religion-less” approach to anything, let alone morality.

From a purely philosophical standpoint, “religion” is the way in which you answer four basic questions:

These are not lofty, theological issues or advanced, philosophical themes that only academic types bother to engage. The way you process yourself and the world around you on a daily basis is based on the way you answer these questions and from that standpoint, you are a “religious” person regardless of how often you go to church, if you go at all.

And from that standpoint, there’s no such thing as an atheist. You’re simply your own god – you’ve established yourself as your own religion.

So, when you hear critics of Christianity or social activists insist that they represent a more judicious approach to moral issues and social tensions by removing the Bible from the conversation, they’re not leveling the playing field as much as they’re giving priority to that “religious” school of thought that establishes the individual as his own deity.

C) Not All Religions are the Same

And before you allow yourself to think that there is more than one “god” to choose from, bear in mind that Christianity is the only faith where man cannot facilitate his own salvation let alone merit the favor of his chosen deity.

Every other religion, be it Islam where you’ve got the option of Jihad, or as a Buddhist you have the pursuit of Nirvana or as a Hindu, you have Moksha – every other doctrine, save what’s represented by the gospel, positions the individual as the one who can achieve their own redemption.

In other words, you don’t need a god to achieve the highest good or obtain a perfect existence. You can rise above the limitations of humanity simply by being, “better.”

Christ, on the other hand, says there’s no amount of noble activity or disciplined sacrifice that can alter the fact that your capacity to sin translates to a perpetual willingness to rebel against the One Who created you to begin with.

Solomon says as much in Ecclesiastes 7:20:

Indeed, there is no one on earth who is righteous, no one who does what is right and never sins. (Ecc 7:20)

In short, you are a spiritual corpse (Eph 2:1-7) and it’s God and God alone that makes you alive. The only thing you contribute to your salvation is the sin that made it necessary (Jn 6:65).

D) There is No Comparison

So, no, not every religion is the same and although a person can sound articulate and even compelling as they elaborate on what it is that they don’t believe, it’s when they start elaborating on what they do believe in that the temporary and relative dynamics they they subscribe to are revealed as the veiled attempt to make mathematical absurdities, philosophical train wrecks and moral disasters sound fulfilling.

Not only is not fulfilling, it isn’t even logical. But you can’t expect anything more from a spiritual paradigm based on the limited and corrupt perspective that defines the human condition.

On one hand, I have the option of believing I’m a lucky accident desperately trying to explain and validate my existence before my expiration date…

There is no comparison. I’ll take the option that defines me as an intentional creation that doesn’t depend on a human mechanism to grant me meaning, value and love.

So, while on the surface this issue appears to be whether or not a certain people group has the right to be happy, the real issue is whether or not they have the Authority to redefine Moral Absolutes.

Initially, that response doesn’t work because Moral Absolutes do not exist in the minds of those who maintain themselves as their own bottom line and to try and convince them otherwise is virtually impossible because of the way they frame their argument in the context of a victim. You can’t be critical of someone who’s in pain, let alone the person who’s trying to help without immediately be labeled as cruel and intolerant which gives the Homosexual Activist the ability to champion their platform without ever having to substantiate it.

But in order for your argument to resonate as compelling, you have to be able to base your reasoning on something other than personal preferences because if you don’t believe in God and the Moral Absolutes that He has established, then you’ve replaced every bottom line you would use to validate your perspective with a temporary and transient commodity that has no credibility apart from whatever substance you assign to it.

That may sound reasonable, but if everything is relative, than you yourself are relative and everything is therefore inconclusive.

In short, you don’t have an argument, only a preferred alternative rooted in a self absorbed mindset that has no chance of being validated because of the way it attempts to make itself it’s own philosophical foundation.

And not only is it an epic fail from a logical standpoint, the end result of a resolve to establish one’s self as their own god is an empty and altogether pointless existence compared to the Compassion and Intentional Design represented by the Message of the Gospel and the Power of God.

The Homosexual Platform is not a demand for equal rights or an innocent desire to simply be happy as much as it’s an instance of an individual going up to God as He’s sitting on His Throne and telling Him to get out of their chair.

They’re basically asserting themselves as the answer to the question, “Who makes the rules?”

And when they do that, they’re ignoring what God has said, Who God is and who we are in relation to Him.