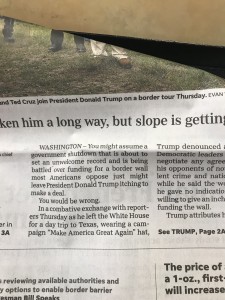 WASHINGTON – You might assume a government shutdown that is about to set an unwelcome record and is being battled over funding for a border wall most Americans oppose just might leave President Donald Trump itching to make a deal.

You would be wrong.

That is the opening line of the front page article in USA Today on the 11th of January. The verbiage that got my attention was, “a border wall that most Americans oppose.” It’s a total of seven words, but in its own subtle way, it sets the tone for the rest of the article and, depending on your perspective, the debate as a whole.

Is the wall something that “most Americans oppose?”

No doubt, there are polls out there that reinforce USA Today’s statement, but…

In a recent CBS poll, 51% of Americans believe that the wall is a good idea.

Moreover, Chuck Schumer and Nancy Pelosi recently took to the airwaves and accused Trump of misinformation, withholding the “critical services” that serve and protect the American people and withhold the paychecks of “800,000 innocent workers – many of them, veterans.”

At one point, Nancy Pelosi states that, “the women and children at the border are not a security threat, they are a humanitarian challenge.”  She goes on to say that this challenge has only been made worse by Trump’s, “cruel and counterproductive policies,” and that Trump is “holding the American people hostage.”

Schumer then jumps in and, more or less, accuses the President of lying by saying that Mexico would pay for his, “ineffective, unnecessary border wall.” He continues by saying that, “unable to convince the Congress or the American people to foot the bill, has shut down the government.” He stated that no President should govern my “temper tantrum,” and that throughout his administration, President Trump has “appealed to fear and not facts.”

The Senate Minority Leader elaborated by saying that people are about to miss a paycheck, families can’t get a mortgage to buy a new home, farmers and small businesses won’t get the loans they desperately need. “Most Presidents,” he said, “use the Oval Office for noble purposes. This President just used the backdrop of the Oval Office to manufacture a crisis, stoke fear and divert attention from the turmoil in his administration.”

Is he manufacturing a crisis?

In Trump’s address, he says:

“Everyday, we are encountering thousands of illegal immigrants trying to enter our country.”

Many of Trump’s critics will rush to criticize Trump by saying his numbers are inflated. For example, factcheck.org says, “In October and November, Border Patrol made 102,857 apprehensions at the Southwest border, according to data from Customs and Border Protection. That works out to roughly 1,700 apprehensions each day.”

And those stats are referring to those who are being apprehended. They don’t include the mobs that are rushing the Mexico – California border every day.

Trump is not lying.

Here are a couple of things to keep in mind:

The question isn’t: “Why are families being separated at the border?” The question is, “Why did you choose to put your family at risk by coming here illegally?”

The question isn’t: “Why is Trump willing to shutdown the government over the border wall?” The question is, “Why are the Dems that supported the wall five years ago suddenly opposed to it?”

The fact that children of illegal immigrants are still not considered citizens as a result of their “green card” status doesn’t change the truth that they’re still allowed to vote.

The fact that illegal immigrants do pay some taxes doesn’t change the truth that they receive more benefits than what their tax dollars pay for to the point where illegals cost the US over 54 billion dollars a year.

It’s a problem, it’s a risk, Trump is not lying and the media is not helping.

“Most of America” is not opposed to the wall and while you might be able to find loaded polls and surveys that contradict that statement, again it goes back to asking the right questions and refusing to settle for judiciously selected facts that are intended to silence the truth.

You have to do a lot of digging in order to verify whether or not Mexico is going to pay for the wall as President Trump has repeatedly stated. Given the way in which the majority of the media outlets are determined to undermine and demonize the Command in Chief at every turn, you have to sift through pages of negative press in order to find something that even attempts to explain what the President meant.

Mexico is paying for the wall, but not in the context of them writing a check to the US Treasury. The bottom line is that they’re paying indirectly through the new Trade Deal that Canada, Mexico and the US recently signed (USMCA) as well as some other fees and fines that are outlined in an August of 2015 memo the Trump campaign crafted during his candidacy..

These are all very do-able and while the naysayers are incessant in their criticisms and insults, the bottom line is that Trump is going forward and he will do what he said he will do and the more his detractors yell, cuss and scream, the easier they make it for the voters to choose substance over sensation in 2020.

Unity at the Expense of Truth? Fools, Fiends and Hypocrites