Pharisees Doubt the Resurrection of Christ – an Example of Fake News 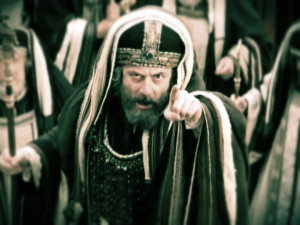 “Fake News” is a sinister mechanism. Reason being is that you can be both ethical and accurate without telling the whole truth with the result being all of your subscribers walking around believing that they have an accurate perspective on the issues when, in fact, they’re clinging to a lie that has a much bigger and more diabolical purpose attached to it.

The following is a great example of “fake news.” I’ve got the passages that are being either distorted or referenced cited in parenthesis. As you read, consider how this same approach can be used to falsify the way in which our nation’s politics and culture are being presented, yet all the while appear completely ethical.

Pharisees Doubt The Resurrection of Christ

All of Israel is caught up in the rumors pertaining to the supposed resurrection of Jesus of Nazareth, a religious and political criminal that was recently put to death. While some are insistent that he is, in fact, alive, there are many others who dismiss it as yet another attempt being made on the part of his followers to validate his claims that he was the Son of God. We sat down with several high ranking officials, both from the Jewish and the Roman institutions that championed what was a very difficult, yet just, decision to get their thoughts.

From the very beginning, the Nazarene who referred to himself as the Son of God, was a problem in the way he incited many Jews to question the Law and their own heritage. His exploits weren’t curious as much as they were damaging, though many of those who heard him speak were unaware of just how toxic his perspective was. Thankfully there were steady and committed hands ready to prevent his corrosive effect from spreading by publicly questioning him and revealing his true colors.

“We challenged him,” said Simon, one of our more prominent Pharisees. “We demanded that he validate his testimony concerning himself and he wasn’t able to do it. (John 6)”

“His illegitimacy is no secret,” says Reuben, an associate of Simon and with him while they were questioning Jesus. “His mother was a disgrace and to see him now trying to assert himself as being equal to Jehovah is not only ludicrous, it’s almost sad to see someone so desperate to cover up the scandalous and unlawful aspects of his birth. (Mk 6:3)”

Clavius, a familiar tribune who serves Rome and has been an advocate for our Jewish traditions on many occasions, has no trouble being critical of Jesus.

“I remember a servant who lived in the household of one of my centurions who was deathly ill,” said Clavius. “He asked the Christ to come and heal his servant and this Jesus, who is supposedly compassionate, never even came to his home. I remember hearing that and from that moment forward, I was convinced that he was a problem and a fraud. (Matt 8:5-13)”

Atticus is yet another distinguished Roman, having served in the Roman army for two decades and a veteran of many conflicts. He was one of the guards who were stationed at the site of the Christ’s tomb (Matt 27:62-65).

“It’s insane!” he said. “I’ve been around death more than once.  Jesus died. He’s dead. It might make you sad, but that doesn’t change the fact He’s gone. And I know what it is to grieve, but to see this rabble refuse to accept the death of their cause and their champion by inventing this ridiculous story that he ‘rose from the grave’ is nothing more than a crazy effort to not accept the fact that your Christ is no more and you need to move on.”

When asked about the way in which the Pharisees were accusing the disciples of having stolen Christ’s body in order to give the appearance of Jesus having risen, Atticus said, “Your readers need to know that the disciples are lying! There is no resurrection. They broke the seal, they violated the sovereignty of Rome, they’re a stench among their own people…they’re insane! (Matt 28:11-15)”

Among those who insist that he rose is a former small business owner named Peter. As a fisherman, your fortunes are limited by default. Perhaps that’s why the prospect of becoming one of the Christ’s followers appealed to him to the point where he abandoned his craft and his family (Matt 8:14-18; 1 Cor 9:5). Maybe in the context of aligning yourself with someone who challenges the governing authorities could lead to a more prominent and financially sound position. Whatever his motivation was, his resolve to promote the fantasy of a risen “Messiah” is still very much intact.

“I’ve seen him!” said Peter. “I’m ashamed to admit that during his arraignment and trial, I denied even knowing him – I was that determined to put as much distance between myself and my former teacher as possible (Matt 26:73-75).”

Peter’s passion is admirable, but does that passion negate the testimony of hundreds of eye witnesses let alone the sworn statements coming from established and reputable Roman officials and Jewish authorities?

“There is something both healthy and beneficial in retreating from emotionally charged declarations and instead cling to the certainty of one’s spiritual heritage,” said Simon. “We obey the political authorities that God has instituted and we revere the Law He gave to Moses. This is my stance and I hope it is one that our people will adopt as well.”