Shaking Hands With the Devil 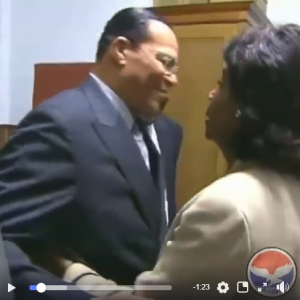 This is part of what makes the Progressive narrative easy to disassemble.

While they sit there and scream their accusations, insisting that Trump is against Women’s Rights (which is code for you won’t fund abortion) and is a Racist (which is code for while you are open to engaging racism as a topic, you refuse to bow down to it as a tactic), they openly embrace Louis Farrakhan who is a divisive fiend.

According to Farrakhan, white people deserve to die. He says, “We won’t attack unless someone attacks us,” but he’s very clever to leave the definition of an “attack” undefined. To him, it’s anything that can be twisted into the appearance of something unjust, whether it’s unfair or not.

Referring to the trials of Michael Brown and Eric Garner, he says: ““As long as they [whites] kill us [blacks] and go to Wendy’s and have a burger and go to sleep, they gonna keep killing us,” he said, to a roar of applause. “But when we die and they die, then soon we’re going to sit at a table and talk about it! We’re tired! We want some of this earth or we’ll tear this [expletive] country up!””

You can read more about the trial of Michael Brown, the substance of the evidence that exonerated the police officer and the reprehensible tactics used by Jesse Jackson and Al Sharpton to promote hostility in the streets during the proceedings by clicking here. And this is just the top of a truly monstrous iceberg. At one point he said, “If the federal government will not intercede in our affairs, then we must rise up and kill those who kill us..”

Cloaked in supposedly righteous indignation and hiding behind phrases such as “compassion” and “social justice,” the racial agenda seeks to posture the 41% of minorities who drop out of High School and the 71% that get pregnant out of wedlock as victims of a biased society rather than a casualty of their own immoral choices.

Yet, this is the philosophical foundation that Farrakhan bases his comments upon and when you see black Democrats embracing him as a champion and a hero, you can’t help but wonder how they cannot look in the mirror and see the racist qualities they would condemn in others.

But they do. They do see the hypocricy, but they’ve got a collection of well rehearsed bullet points ready to unleash on anyone who would question them.

Still, it gets very difficult to maintain that illusion when they compromise their position by allowing their true colors to be revealed when they shake hands with the devil himself.

Convictions are convoluted coctails of logic and passion. You don’t change your opponent’s mind with a book or a paragraph. Only the Truth makes a difference (see 1 Cor 2:12) and it’s only the Rocket Sauce of the Holy Ghost that allows it to register (Prov 9:10; Jn 6:65; 1 Cor 2:16). Still, you want to be ready to articulate your convictions in a way that sounds like you’ve actually thought about it (1 Chron 12:32; 1 Pet 3:15). Videos such as these make it easier.

Keep these images in mind next time you hear Maxine Waters demand the impeachment of President Trump. Remember who’s shaking hands with whom when you hear Whoopi talk about racism and being oppressed (just look up Whoopi and watch her in action on The View). We’ve had a black President, a black Attorney General, a black Secretary of State, we’ve got black Supreme Court Justices, when riots broke out in the city of Baltimore in 2015, the city’s leadership was predominantly black.

No, there is a brand of hypocricy that is nothing short of sinister on the part of black leaders who accuse Trump of racism. It’s especially obvious when you see them be friendly with a fanactic and it’s not too hard to decipher when you bother to pop the statistical hood on the opportunities siezed by forward thinking minorities compared to those that are squandered by their foolish immoral counterparts.

It’s not institutional racism, it’s irresponsible and immoral behavior on the part of the individual.

And if you think this is all bogus in that it’s coming from a caucasian, feel free to talk with Ben Carson, Larry Elder, Deneen Borelli, Morgan Freeman, Condoleezza Rice, Colin Powell, Allen West or anyone else that’s refered to as an “Uncle Tom” by their liberal brothers and sisters.

Is America More Depraved Than Other Nations? Illegal Immigration Q&A