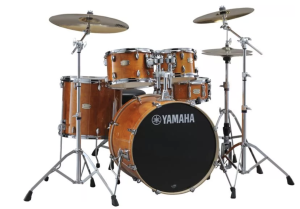 For five years I was a Drum Instructor at the Armed Forces School of Music. Bar none, it was one of the most rewarding experiences in my professional career.

It could be a little frustrating, however, when you had to contend with a student that refused to believe there was room for any improvement in the way they played. They were their own Absolute. And if they were confronted with a situation where they were obligated to concede that they weren’t “all that,” instead of embracing it as an opportunity to learn and improve, they would criticize the curriculum and / or assault the character of whoever was trying to teach them something. Nothing was allowed to upset or threaten the universe they had created for themselves where the only measurement of quality was the one they themselves had instituted.

In some instances, it proved professionally lethal because when it was time to take their final audition, inevitably they weren’t prepared and they would fail. But even as they were headed out the door, they were cussing everybody and everything except their own refusal to acknowledge any standard apart from the standard of themselves.

This is not only an apt description of an arrogant student, it’s also the philosophical disposition of someone who refuses to believe in God.

I hesitate using the word, “atheist.” Reason being is that your “god” is whoever you default to when it comes to defining your morality, your destiny, your origin and your purpose. If you maintain yourself as your own deity, everyone of the aforementioned dynamics are defined and processed according to a purely self centered paradigm. Creation is a lucky accident, morality is a matter of preference, life after death is a subjective fill-in-the blank and purpose is nothing more than however you choose to invest your time.

Even when you attempt to enhance your definitions of things like justice and compassion with words that imply a commitment to the common good, you are still in control and your allegiance to whatever convictions or institutions you’re currently subscribing to remain intact for only as long as they appeal to your personal preferences.

The very idea of God is heinous to the atheist because it necessitates them having to relinquish their “throne” and install Him as the rightful King of their lives and the Divine Bottom Line for all things related to the human experience. And just like the self absorbed student, when they find themselves having to scramble in order to make their hollow standards sound more substantial, they default to criticizing the Curriculum (the Bible) and assaulting the Instructor (God Himself).

For someone who supposedly read the Bible multiple times, you should know it’s God’s grace and not your performance that translates to a relationship with Christ. And that grace really is “amazing” when you consider the fact that even on your best day, you’re still light years removed from being holy, yet that’s exactly what God sees when you accept the fact that Christ died for you rather than maintain it either as a myth or a hollow tradition.

Well, you believe he drowned his children though? And ordered genocide on them? I mean…

I believe that it’s possible to engage in a form of evil that is so vile, that God can, and will, end your life. It’s a form of Divine Capital Punishment that’s coming from a Perfect Judge and if you want to question that, you can, but it requires an willingness to believe that you’re wiser and more just than God Himself.

WHO CREATED YOUR CREATOR? lol Real easy to not actually think, and just say silly nonsense. Big bang is pretty well accepted, do you even know what red shift is? Nope.

I willing to believe that there was a Big Bang, but when you consider the Cosmological Constant and even the words of Einstein, the notion that this was all a result of random forces, let alone the presumed preexistence of systems and material necessary for a “big bang” is bogus. Furthermore to subscribe to the idea that there wasn’t Somebody Who orchestrated those forces in a manner that reflects the resulting precision and elegance of the created order is asinine.

See the difference here is.. I don’t say I know what was before the Big bang. Most likely the Universe is on a cycle…One thing is for CERTAIN. The imaginary god, of a blood cult of sacrifice, from mythological texts from the Iron and Bronze ages, didn’t create ANYTHING. lol

What, did you take a selfie of you and the starting point of the universe? Your adherence to Evolution and the idea that even the precise nature of a single cell is a result of purely random forces is more of a leap of faith than me believing that there had to be a Creator. And it is faith. What you cling to is not based on a scientific method because a “billion years” cannot be observed let alone quantified. You don’t explain the laws of nature by bending them and then walk away thinking you’ve got it all figured out. You actually have more question marks than you do exclamation points regardless of how dogmatic you try to sound.

Are you aware of the Doughnut / Orange / Torus Universe theories?

Yes. And everyone of those theories assumes a collection of ordered systems within which those theories can function. You don’t explain the ORIGIN of anything by circumventing questions like where your Periodic Table came from.

My opinions are based on facts, when new facts are discovered, my opinions change, based on those FACTS…

No. Your opinions are based on theories. It’s called the “Theory of Evolution” because there’s even less evidence to support it today than when he first wrote “Origin of Species” and the same goes for the lion’s share of what atheists cling to in order to explain their existence. And anytime those theories are adjusted in order to compensate for their lack of substance, your convictions have to be amended as well. Your need to adjust your perspective is not based on academic humility as much as it’s based on intellectual desperation.

Know what IS NOT A FACT? That ANY of you are one way telepathic pen pals, and possible ‘best friends’ with the creator of all existence.

No, here are the facts: I’ve got over 2,000 years worth of architecture, art, literature, music, archaeology along with over two millennia worth of dramatically changed lives to justify a solid conviction that Jesus really did live, He really did die and He really did come back to life. When He did that, He validated everything He ever said as being absolutely True and when I make a point of following the Instructions on the Box, I benefit. in that my Purpose goes beyond my business card, my morality goes beyond my appetites and my destiny goes beyond my tombstone,

Know what else is a fact? Blood makes things dirty, not clean. Know what else is a fact? Pretending to drink human blood, and eat human flesh, to please an imaginary god, is BONKERS… What sort of “all powerful god”, needs something to die, so he has a way to avoid burning a very slim percentage of his creations, for eternity? Good grief dude, it is 2020 in less than 30 days. Just stop spreading this nonsense.

The Bible never advocates blood as a detergent. Transubstantiation is bonkers, but it’s a Catholic distortion and not a Biblical precept. When Christ presided over the Last Supper, He was speaking to the symbolism represented by the Passover and how it was seeing its ultimate manifestation in His death and resurrection. God doesn’t “need” anything, it’s the sinner that’s broken and needs to be fixed. Hell is not a forgone conclusion, it’s a choice and it’s not a “slim percentage” that requires redemption, it’s anybody that’s ever breathed.

And let’s pause here for a minute…Hell IS a choice. Atheists love to ask, “How can a loving God send someone to hell?” when the real question is, “How can a rational human being refuse the grace offered by a loving God?”

I mean, sure it’s totally normal for a god to be obsessed with the removal of foreskins in a bloody snip, foreskins that he purposely created, to be chopped off.. BRILLIANT.. This is the base event, that Christianity binds itself to. Abraham hears voices in his head, cuts off the end of his and his sons genitals, and only stops from murdering his oldest son when angels fly down out of the sky. Because your all knowing god, needed him to almost murder, to prove his loyalty… Brilliant.. Please stop pandering to this nonsense.

Circumcision is not the base event that Christianity binds itself to, it’s the Resurrection. Abraham wasn’t hearing a voice in his head, he was hearing the voice of God and Abraham’s willingness to sacrifice his son was a picture of the way in which God would sacrifice His Son. The only difference being is that God didn’t intervene at the last minute and instead watched His Son die for individual like you who refer to it as “nonsense.”

Here’s the bottom line: You want to maintain yourself as your own deity and anything that can’t be explained empirically is instead defined according to outrageous probability values and a host of assumed variables. You observe the created order and insist that it came from chaos, when confronted with the obvious limitations of science, you nevertheless declare it as irrefutable and instead of processing humanity as a reflection of his Creator, you reduce him to a self absorbed accident desperately trying to explain and validate their existence before their expiration date.

It’s Christmas, man! Christ’s mass. You say you’ve read the Bible several times, well go back and read Romans 1:20 (origin), Ephesians 2:10 (purpose), Hebrews 9:27 (destiny), Psalm 19:7 (morality) and don’t miss Romans 5:8! It’s the most wonderful time of the year because what was closed door has been flung open wide by God agreeing to pay the penalty that we would otherwise have had to pay ourselves. That’s something to celebrate! But it will never make sense let alone be welcome to that person who maintains themselves as their own absolute just like that drum student who dismissed any standard save the standard of their own ability.