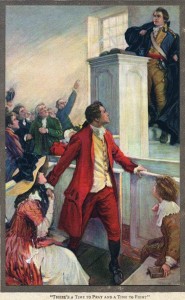 The question on the table is: “Does being a patriot equate to being a Christian and vice versa?”

Let’s start by asking that question.

My definition of a sound government and the extent I go to defend and champion my convictions do not translate to a relationship with Christ. Nor does the way I vote  change my status before God, in terms of the grace He offers and the grace I need.

God makes very clear that I’m to be engaged in the political process. It is not just a matter of being “interested” as much as it’s about being obedient.

1 Timothy 2:1-4 says that I’m to pray for those in positions of authority. 1 Chronicles 12:32 references the men of Issachar as being the smallest contingent of those who joined King David as able bodied servicemen, but they’re described as “men who understood the times and knew what Israel should do.” In that way, they’re were just as helpful to David as those tribes who were greater in number, if not more so because they understood the current political climate and recognized David as a godly element that needed to be served and supported.

Today, the political lines that have been drawn are vivid and to be either indifferent or ignorant is not just irresponsible, it’s disobedient.

Beneath the flag of the Democrat party you have abortion, same sex marriage, the elimination of any sort of Christian presence in the marketplace and a doctrine of entitlement that is neither financially sustainable let alone Biblical.

Abortion is touted as something that falls under the heading of a “woman’s right to choose.”

A woman does have the right to choose. She has the right to choose whether or not she’s intimate with a man and risk conceiving a child that she’s not willing to raise. That is the choice she’s entitled to make –  not whether or not she chooses to end the life of the human being that’s growing inside of her simply because she doesn’t want to take responsibility for her actions.

Are there exceptions? Perhaps. But the vast majority of abortions that are done have nothing to do with the health of the mother as much as it is the desire to avoid raising her baby. And of course, the father of said infant is rarely discussed in these conversations which further reinforces the point that this topic is not about “family planning” or “pro choice” or whatever noble sounding verbiage is used to disguise the true nature of what abortion is really all about.

The homosexual agenda has morphed into more than just the lawful practice of same sex marriage. Now we’re got the transgender issue where we’re being forced to accept their decadence as a legally endorsed behavior. It is now to the point where you can be arrested if you don’t refer to a transgender individual by their preferred sexual moniker.

The doctrine of entitlement says that my ethnicity translates to a collection of financial and legislative subsidies. My work ethic, my morality and anything else that might be considered to qualify whether or not I merit any assistance is dismissed as irrelevant and I am left alone to demand money and exemptions based on the notion that I am being unfairly treated both legally and economically.

“The Black Robe Regiment” was the name that the British placed on the courageous and patriotic American clergy during the Founding Era. Men like Peter Muhlenberg zealously labored to connect the practical dots that existed between the Word of God and America’s quest for freedom not only in their sermons, but also on the battlefield.

The British were highly critical of Muhlenberg and his like minded associates within the “Black Robe Regiment” to the point where it was said that, “If Christian ministers had not preached and prayed, there might have been no revolution as yet – or had it broken out, it might have been crushed.1

While you’re never going to gauge the Biblical substance or accuracy of a person’s relationship with Christ based on political convictions alone, you can access their regard for Scripture in the way they either apply or ignore God’s Truth in the way it applies to moral issues. And if the political party you align yourself with champions legislative favors for behaviors that are identified specifically in the Bible as being wrong, then you’ve got an inconsistency that can only be explained by either a limited understanding of – or a fundamental disagreement with – God’s Word. However you might want to explain that to your human critics might be perceived as credible, but any attempts to refute the Substance of God’s Word directed towards its Author are bound to, not only fall short, but be revealed as prideful, perverse and totally unacceptable (Prov 1:7).

But here’s the thing:

Love in the absence of Truth is nothing more than lust. However noble or intense your desire may be for someone, it if’s rooted in something the Bible defines as selfish and perverse, it’s not love. It’s lust and it will prove to be lethal (see Ps 101:3; Jas 1:14-15; 1 Jn 2:15-16).

Compassion in the absence of Truth is nothing more than favoritism. Compassion, by definition, is the practice of extending mercy where justice would otherwise be exacted. But in order for compassion to resonate as such, the Character of its Source has to be noble and just. When Christ extends mercy, He does so having both honored and fulfilled the Law (Matt 5:17). When a politician makes an exception for someone’s illegal behavior in order to secure votes, that’s not compassion. That’s favoritism and a perversion of the Truth as opposed to an expression of it.

Charity is the absence of Truth is nothing more than a subsidy. There’s a difference between someone asking for help who wants to improve their situation and someone who’s asking for the resources they need in order to make it worse. Subsidizing someone’s moral and practical failures contributes to their pain and suffering and is the antithesis of charity (see Prov 10:23).

However political charlatans and their base may want to parade noble sounding verbiage before their constitutens and those they want to impress, the true nature of their platform is obvious. But you’re not going to change their minds or the minds of those that are drawn to them by simply arguing with them.

You have to become a part of the “Black Robe Regiment” and, like those that fought for our nation’s independence, fight now for her dependence on the One Who gave her the the freedom she sought to begin with.

This is a Christian nation, first in name, and secondly because of the many and mighty elements of a pure Christianity which have given it character and shaped its destiny from the beginning. It is pre-eminently the land of the Bible, of the Christian Church and the Christian Sabbath. It is the land of great and extensive and of-repeated revivals of a spiritual religion, – the land of a free conscience and of free speech, – the land of noble charities and of manifold and earnest efforts for the elevation and welfare of the human race. The chief security and glory of the United States of America has been, is now, and will be forever, the prevalence and domination of the Christian Faith.2

It’s no longer enough to win an argument or even a court case. The fight that needs to be both fought and won is the fight that is waged in a person’s heart and only God can win that contest.

Be ready to explain what you believe and why and be able to do it without sounding lame. Know enough about what’s going on in the world to know both how to converse and how to pray. But pray! Be like those in the “Black Robe Regiment” who fought both on their knees and on their feet knowing that while their courage was important, it was their faith that was absolutely necessary and it was the way in which God honored their prayers that qualified their sacrifice and their struggle as both noble and victorious.

2. “Christian Life and Character of the Civil Institutions of the United States (1864)” by Benjamin Franklin Morris, Google Books, accessed February 1, 2022