The Current State of Affairs in Seven Easy Steps 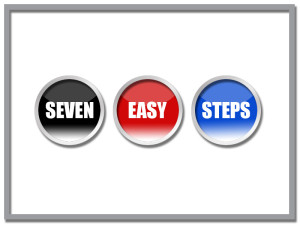 While the personality is a factor, it’s the platform that matters most. You can have impeccable credentials, your manner may be both stately and dignified, but’s it’s what you stand for and the extent to which you get things accomplished that ultimately justifies a voter’s support.

II) The difference between the Republican and Democrat platforms lies in their definition of a Moral Absolute.

Either God is the Bottom Line or man is his own deity. Among the talking points of the Democrat party you have a variety of topics championed in the context of social justice and compassion that are ultimately revealed as scenarios where you are approaching God as He’s sitting on His Throne and telling Him to get out of your chair.

Our nation is unique in that it’s founded on Biblical Absolutes. We evaluate the Declaration of Independence and the Constitution, not according to the character flaws of those that crafted those documents, but according to the substance of those documents themselves which reference Divine Truth as the basis for their credibility. Our ability to endure and thrive as a nation is directly related to that dynamic, yet every attempt made to eliminate God from our history or His Influence in the marketplace has come from an entity endorsed by the Democrat party1.

III) When confronted with content that cannot be easily refuted, Democrats distract from the substance of what being said by assaulting the character of the one who’s speaking.

Listen to an irritated Democrat and you will hear one or more of the following:

It’s not the credibility of the content that is addressed, rather it is the character of the opponent that is attacked and in that way their platform is refuted without having to utter a single word.

IV) The question isn’t whether or not any one crisis is real, the question is to what extent is it being exploited.

Whether it’s COVID-19 or Police Brutality, the issue is never engaged as a mere topic. Rather, it’s used as a tactic to advance an agenda that has nothing to do with the original subject matter.

V) Systemic Oppression is a legitimate conversation only if it includes an evaluation of an individual’s morality and overall decision making.

If your personal history is characterized by a parade of immoral and foolish decisions, your current status has nothing to do with a systemic flaw as much as you are merely reaping what you have sown and the only person or party that is responsible for your situation is yourself.

VI) Any kind of oversight should be welcomed by anyone who wants to prove the credibility of an election result.

If yours is an honorable victory, than you should welcome any inspection of a scenario where fraud is suspected. There are sworn testimonies, signed affidavits, mathematical impossibilities, systemic vulnerabilities and a suspicious collection of personalities and media types that warrant consideration. To mock and / or dismiss a desire to investigate these things demonstrate a resolve to cheat more so than a determination to win.

VII) However informative or manipulative the news media may be, it is the responsibility of every citizen to think for themselves and be able to state what they believe and why.

We are dependent on journalism to understand what is going on in the world. But it’s Journalists who dictate not only the headlines, but also the facts they choose to either highlight or undermine to accompany those headlines. Like a mail in ballot, there’s ample opportunity to distort what’s real and what’s true. Thankfully, there’s more than one primary media outlet and the truth can be discovered by comparing one account with another. But it takes effort and a willingness to not simply subscribe to whatever headline reinforces one’s personal philosophical preferences.

1. “Godless” by Ann Coulter goes into great detail about how the Left’s attack on Christianity. Regardless of how it’s packaged in the context of “compassion,” “justice” and “science,” it is a relentless assault on Christ, Scripture and Moral Absolutes. For more information about the book, click here. See also “The Left’s War on Christianity” by John Hawkins and Persecution by Dave Limbaugh.

Atheism In God We Trust