When does Statistical Economic Disparity NOT Indicate Racism? 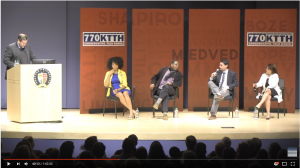 Freedom left unchecked by that which is moral results in a scenario where you’re no longer asking if it’s “right,” you’re now just asking, “Is it Constitutional?”

John Adams said, “Our Constitution was made only for a moral and religious people. It is wholly inadequate to the government of any other.”

What’s happening in the NFL is a situation where they are simply reaping what they have sown. Faced with the tens of millions of dollars lost in advertising, owners are now compelled to tell players that they must stand. That only makes the situation more convolluted because now you’re “forcing” players to take a stand when they should do so out of respect for the flag, not because they’re being compelled to do so. But the real question is still not being asked: “Are you right, not just in the way you voice your convictions, but also in the substance of your accusations?” In both instances the answer is a resounding, “No!”

It’s never been a question of whether or not they had the right to take a knee during the National Anthem. The question was:

Recently I was listening to a debate and there was a question posed that I thought was brilliant because of the way it reveals the true essence of today’s activst as being fundamentally flawed. The question was, “When does statistical economic disparity NOT indicate racism?” For a moment, the normally talkative panel was quiet. It was a brilliant question (click here to watch the debate in its entirety. Go to 52:53 to witness the actual question). You could just as easily ask, “When is the use of lethal force on the part of a white police officer NOT motivated by racism when the suspect in question is black?” In both instances, you’re compelled to think beyond the knee jerk reactions of those who’ve convinced themselves that America as an institution is racist and instead, base your answer on the moral tenor of the individual in question.

Rarely do activists concede the statistical realities in terms of how 41% of black kids drop out of High School or that over 70% of the babies born to the black community in 2015 were born to unwed mothers. And as far as the claim that blacks are targeted, harrased, arrested and shot for no reason other than the color of their skin fails the litmus test of objective stats and studies by non-partisan services. In short, “racism” has become the smoke screen used for both political gain and as a means to veil the immorality and criminal mindset that prevails in the inner cities. So, when you see Colin Kaepernick or anyone who thinks like him, take a knee during the National Anthem or link arms to demonstrate solidarity to protest social injustice, know that the prevailing injustice that’s occuring is the way in which black communities promote a culture that conditions its members to make bad decisions and then either blame a fictitous oppressive force or expect someone else to clean up their mess. It’s not fair to their young people, it’s not fair to the police who are sworn to serve and protect and it’s not fair to those who sacrificed so much – both white and black – to ensure that a black man could become President or a black woman could become Attorney General.

Their platform is flawed, their manner is belligerent and their belief that they represent the sentiments of, not only their fans, but the majority of America is dangerously ill founded. Not because it represents a threat to their fan base, but because it constitutes an irreparable breach between them and the ones who buy tickets to watch their games. It’s a shame, but then again, perhaps its necessary in order to reveal the truth behind the headlines and the poison behind the protests.