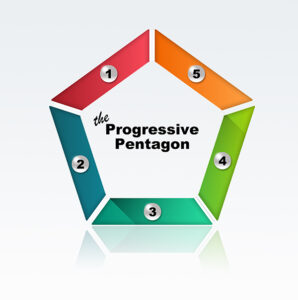 There are five tactics you can be listening for when you’re being told by someone that they have a point, when in fact they’ve got something to hide.

I call it the “Perspective Pentagon” because, taken together, they serve as the way in which the Left both defends it’s stance and attacks it’s opponents.

By making your opponent look immoral, their platform is interpreted as being immoral as well, regardless of how sound it may be (Ps 5:8-10).

When you hear this tactic being used, chances are the person who’s speaking has something to hide.

2) They spend more time pretending to be hurt than they do proving that they’re right.

You can’t criticize someone who’s in pain let alone the person who’s trying to help without immediately being categorized as cruel and insensitive.

Because of the way this tactic has the ability to shut down any transparent dialogue, chances are the person who uses this technique can’t afford to be cornered by a direct question and they have something to hide (Prov 22:13)

3) They spend more time trying to appear honest than they do telling the truth.

You can be ethical without telling the whole truth. When you’re hearing this tactic being used, it’s then that credible evidence is usually being dismissed for no good reason because of the way it threatens to expose the truth.

4) They spend more time talking about labels, mobs and crowds than they do a name, a person and a choice.

You can conceal a person’s lack of judgment by ignoring their individuality and seeing them instead as part of a supposedly virtuous group. You can do the same thing, only in reverse, by refusing to see a person’s virtue and instead see them as part of a sinister collective.

Both approaches are part of a heinous tactic that seeks to assign whole demographics a specific morality, regardless of the individuals who do or do not qualify…

5) They spend more time defending bad decisions and demonizing personal responsibility than they do applauding wise choices and holding people accountable for their actions.

Of all the tactics represented by the “Progressive Pentagon,” this is the most obvious in that the person speaking is calling “good” bad and vice versa.

It’s accomplished by insisting that, as part of a flawed system, there are no “bad decisions” because of the way your environment obligates you to fail. Hence, you are not responsible for your actions and it’s not you that has to change, rather, it’s the ideals that the current system is based on that need to be altered if not destroyed.

It’s as nonsensical as it is sinister, yet it is a hallmark of those who have something to hide (Is 5:20).

You can remember those five tactics by using this mnemonic:

Anytime you hear any of these tactics being deployed, you’re listening to someone who has something to hide. And generally, what they’re trying to conceal is either;

Finally, you demonstrate how what’s being debated is a natural compliment to the sinister agenda that’s hoping to go unnoticed. You avoid anything that can be potentially dismissed as an outrageous conspiracy, but you don’t allow the obvious to be dismissed as a meaningless coincidence.

…and you silence the evil disguised as compassion and the lie that poses as the truth.