What if Homosexuality Were a Moral Issue? 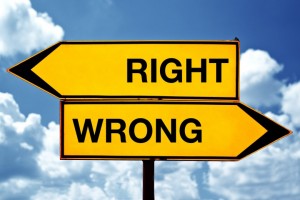 What if Homosexuality was a moral issue?

What if all the data that’s out there that suggests that homosexual tendencies are a result of distinct brain architecture, genetic predispositions or specific social conditions were put aside and the whole debate was initiated from the stance that says “Homosexuality is a moral choice…”

Everything about the current activst dynamic would come to a screeching halt. “Rights” would be revealed as tactics designed to shift the debate away from personal responsibility, every initiative that’s currently underway that seeks to redefine that which constitutes a family would be abandoned, “religion” would stop being either attacked or manipulated and “Gay Pride” would take on a whole new appearance as a defiant campaign against healthy morals, credible science and sound theology.

That’s why homosexuality can’t be a moral issue. That’s why every effort is made to drown out the stories of those who were practicing homosexuals at one point, but now are not. That’s why those who rightly condemn the nature and the findings of studies done by homosexual scientists desperately looking for ways to force science to certifiy their sexual preferences are dismissed as unenlightened and insensitive. That’s why anyone who bothers to pop the hood on the science, the culture and the motive behind the Gay Agenda and point out the fundamental lack of substance and evidence is immediately categorized as cruel or at least overbearing because, after all, it’s not a moral issue.

There are very few problems in our culture that haven’t been reduced to some kind of victimhood. There are very few scenarios where you can’t fly some phD in to insist that the problem being examined is anything but the result of someone’s poor choice. And until we quit prioritizing the “rights” of a person over the “responsibility” of that person, the debate goes nowhere, nothing gets fixed and the situation continues to deteriorate.

My stance is not to be twisted into something that justifies abuse or violence. Rather, it is to be processed as a philosophical starting point that defines homosexuality as an abnormality and antithetical to all that translates to a healthy person, a healthy family and, ultimately, a healthy society. And there’s nothing productive being accomplished by accepting same sex marriage, embracing Gay Pride, rewriting the Bible or smiling as experts try to suggest that our kids may “suffer” from gender dysphoria. It’s all coming from the same pond and as long as we maintain that it’s not a moral issue, then the situation will continue to get worse as we continue to be told that it’s actually getting better.

The Ultimate Trump Card What Are Gay Rights?