A Poem About Jesus by an Islamic Cleric 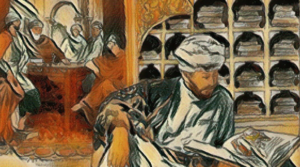 I was recently participating in a Facebook thread that was questioning the deity of Christ.

At one point, a Muslim chimed in and cited this poem written by an Islamic cleric (Ibn Qayyim) who asserts a number of observations about Jesus, one being the idea that the crucifixion of Christ is an absurdity, given the fact that He was supposed to be God.

You can’t expect to accurately process the Truth of God’s Word if you’re determined to see yourself as your own bottom line and Jesus as nothing more than a motivational speaker.

Either the Resurrection happened, or it didn’t. If it never occurred, than it doesn’t matter.

But if it did happen, than nothing else matters.

While we don’t have footage or recorded interviews of the players that were involved, we still have documented, eye witness accounts. While it’s possible to doubt the substance of their testimony due to the amount of time that’s lapsed between the actual events and the current year, the fact that they all were willing to die rather than say He never rose is more than compelling.

I do not subscribe to a pretty fiction. Christians are not philosophical weaklings that cling to a fairy tale because they’re unwilling to accept the human condition as it is.

I don’t believe the intricacy of the universe is a lucky accident. I don’t think the disciples would’ve been willing to die for a lie. I believe every religion except Christianity to be a veiled attempt to position man as his own absolute and the gospel to be the only doctrine that sufficiently satisfies man’s need for meaning, morality and redemption.

He wasn’t defeated, He was determined and because He didn’t waiver, I can know for certain that my sin is forgiven, my story has meaning and my Savior is Real!

Here’s the poem and my response…

To all my Christian Facebook friends: Here’s a poem of a great Muslim Scholar by the name of Ibn Al-Qayyim who wrote a poem to the world of Christians about The Greatness of God and the real position of Jesus Christ.
أعباد المسيح لنا سؤال … نريد جوابه ممن وعاه
Oh Worshippers of Christ! We’d like your most wise to answer our question.
إذا مات الإله بصنع قوم … أماتوه فما هذا الإله
If our God was murdered by some people’s actions, then what sort of God is this?
وهل أرضاه ما نالوه منه … فبشراهم إذاً نالوا رضاه
And we wonder. Was he pleased by what they did to him? If so then blessed are they, for they must have achieved his pleasure.
وإن سخط الذي فعلوه فيه … فقوّتهم إذاً أوهت قِواه
But if he wasn’t pleased with them, then this must mean they overpowered him.
وهل بقي الوجود بلا إله … سميع يستجيب لمن دعاه
So was the present entity left without a God, an All-Hearing being who can hear prayers?
وهل خلتِ الطباق السبع لما … ثوى تحت التراب وقد علاه
And were the Heavens vacated, when he was placed under the earth and the dirt was above him?
وهل خلت العوالم من إلهٍ … يدبرها وقد سُمرَت يداه
And was the Universe left without a God to manage it while his hands were being nailed down?
وكيف تخلت الأملاك عنه … بنصرهم وقد سمعوا بكاه
And why didn’t the Angels help him when they heard him cry out (in pain)?
وكيف أطاقت الخشبات حمل الإله … الحق شد على قفاه
And how could any wooden beam holdup a True God, while He is being fastened to it?
وكيف دنا الحديد إليه حتى … يخالطه ويلحقه أذاه
And could any iron ever be brought to Him so that it would be driven inside Him and cause Him pain?
وكيف تمكنت أيدي عداه … وطالت حيث قد صفعوا قفاه
And how could ever His enemies’ hands ever reach Him, so that they could whip him from behind?
وهل عاد المسيح إلى حياة … أم المحيي له ربّ سواه
And did this Christ revive himself or was there another god that brought him to life?
ويا عجباً لقبر ضم رباً … وأعْجَبَ منه بطن قد حواه
And how strange is it. That a grave could be enclosed on a god. And even stranger is the womb that enclosed him (before.)
أقام هناك تسعا من شهور … لدى الظلمات من حيضٍ غِذَاه
Which he remained inside for nine whole months, in utter darkness being fed by blood.
وشق الفرج مولودا صغيرا … ضعيفا فاتحا للثدى فاه
Then he emerged from the womb as a small child, completely helpless reaching out to be fed.
ويأكل ثم يشرب ثم يأتي … بلازم ذاك هل هذا إله
Thus, he ate, drank, and after he answered the call which comes naturally. So is this really a god?
تعالى الله عن إفك النصارى … سيسأل كلهم عما افتراه
High Exalted is Allah above the lies of the Christians. Each of whom will be asked about their fabrications.
أعباد الصليب لأي معنى … يعظّم أو يقبّح من رماه
Oh Cross worshippers, for what reason is someone exalted (for accepting this) and blameworthy for rejecting it?
وهل تقضى العقول بغير كسر … وإحراق له ولمن بغاه
And is it not logical that we should break and burn (what humiliated Christ) and the one that made it?
إذا ركَبَ الإله عليه كرها … وقد شدت لتسمير يداه
Since (you claim) that God was forcefully crucified upon it, with his hands nailed to it.
فذاك المركب الملعون حقا … فدسه لا تبسه إذا تراه
For truly what a cursed cross to carry? Which one should discard instead of kissing when glanced upon.
يهان عليه رب الخلق طرّا … وتعبده فإنك من عداه
For (you claim) the Creator was abused upon it. Yet you appear to worship it, so are you one of His enemies?
فإن عظّمته من أجل أن قد … حوى رب العباد وقد علاه
If you exalt it (i.e. the Cross) because it carried the Lord of all that exists,
وقد فقد الصليب فإن رأينا … له شكلا تذكرنا سنا
then why don’t you also prostrate and exalt the graves?
فهلا للقبور سجدت طُرّا … لضم القبر ربَّك في حشاه
For it was the grave that held your (so-called) god in it.
فيا عبد المسيح أفق فهذا … بدايته وهذا منتهاه
Oh worshippers of Christ, Wake up. For this is what the matter is all about.

First of all, go to John 10:18. Jesus wasn’t overwhelmed and executed by the Pharisees, He willingly laid down His life and did it in a way where it fulfilled Old Testament prophecy to the letter.

You can see that illustrated in your other question about Mark 15:34 when Jesus cries out, “My God, my God, why have you forsaken me?” He’s quoting Psalm 22 which aptly describes the status of one who is the picture of suffering and agony and yet…completely vindicated by the end of the Psalm. It’s not that Jesus was feeling abandoned as much as He was putting a prophetic exclamation point on what was happening in that moment.

As far as Lk 22:42, just because Calvary was voluntary, doesn’t mean it was pleasant. Jesus was God, but that didn’t mean He was going to be immune to the pain of Hematohidrosis, being beaten, Roman flogging and having spikes drilled into His wrists and ankles.

That’s part of what makes what He did so amazing is that He knew exactly what was getting ready to happen, and while He knew it was all going to land in a good place, He still had to endure every lash, every cut and every bruise.

And He did it for you!

Mohammad came on the scene centuries after the fact. His claim to have been informed by Gabriel that Jesus wasn’t the Messiah and that He didn’t die and come back to life doesn’t really impress me because it’s one thing to die for something that you believe to be true, it’s quite another to die for something knowing that it’s false.

Every one of the disciples died a martyr’s death except for John who died in exile on the island of Patmos.

I’m going to go with those who would’ve rather sacrificed their lives than say that Jesus did not die. They were there. And however nonsensical it may have seemed, they saw Him alive and no one was going to tell them the gospel wasn’t legitimate.

Does it not strike you as odd? Jesus could’ve said, “I’m going to rise spiritually,” and the culture would’ve bought it. He could’ve navigated His career in a thousand different ways that would’ve prevented Him from having to suffer like He did. And then when it was all said and done, His doctrine says to love your enemies while the Quran says: “And kill them wherever you overtake them and expel them from wherever they have expelled you, and fitnah is worse than killing. And do not fight them at al-Masjid al- Haram until they fight you there. But if they fight you, then kill them. Such is the recompense of the disbelievers.” (sura 2:191)

…you want to deny the substance of the Old Testament, you want to twist the sacrifices made by the disciples into a nonsensical defense of a lie and you want to believe that man can facilitate his own redemption.

Mohammad had to be critical of Christ’s resurrection because of the way it validated Jesus as the Son of God. Mohammad had no such credentials nor could he point to anything other than his charisma to substantiate his message. So, both the Quran and the poem you cite don’t weaken the Deity of Christ as much as they reveal the insecurities of a man whose doctrine couldn’t compete with the Truth.

Prayer According to Some, Jesus Never...