What is “Muscular Christianity?” 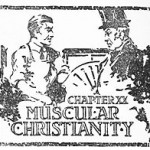 From a historical perspective, the term, “Muscular Christianity” first came into the public spotlight when it was used as part of a book review written by T.C. Sandars of a novel entitled, “Two Years Ago” by Charles Kingsley in 1857. Sandars had seen in the book’s main character a combination of physical athleticism and Christian virtue and he called, “Muscular Christianity.”

But it was Kingsley’s contemporary, Thomas Hughes in his book, “Tom Brown at Oxford” where the characteristics of the “muscular Christian” were fleshed out and described in a way that resembled a 19th century Christian knight or a “true” gentleman:

…the least of the muscular Christians has hold of the old chivalrous and Christian belief, that a man’s body is given him to be trained and brought into subjection, and then used for the protection of the weak, the advancement of all righteous causes, and the subduing of the earth which God has given to the children of men. He does not hold that mere strength or activity are in themselves worthy of any respect or worship, or that one man is a bit better than another because he can knock him down, or carry a bigger sack of potatoes than he. For mere power, whether of body or intellect, he has (I hope and believe) no reverence whatever (The Victorian Web).

While it was never an organization per se, it was nevertheless a mindset that was encouraged by English clergy who saw sports as way to improves one’s physical capacity to serve in the context of personal and public ministry. In addition, it proved an effective way to get men interested in church and their spiritual disciplines when in 1899 women constituted 75% of church membership and 90% of church attendance.1

Men’s Ministry…it can be a tough thing to get moving because reading one’s Bible and spending time in prayer is often perceived as a last resort reserved for those who can’t get it done.

There’s a difference between being transparent and being defeated. While conversing with one’s King should never be perceived as a sign of weakness, it can be given the way it’s portrayed in our culture and even the way it’s sometimes voiced by well meaning believers.

Even some of our Praise and Worship focuses more on the weakness of the one that’s worshipping rather than the True Muscle of the One being worshipped. It is a very healthy and necessary thing to confess one’s inability, but not at the expense of celebrating God’s Perfect Ability to do all things.

To get a man interested in reading the Word of God, it has to be seen as more than just a Divine Emergency Kit. Rather, it has to be engaged as part of a Holy Ghost Strategy to be better than your best and being able to, not just get things done, but being able to get things done in a way that translates to an outcome that’s better than you could have planned on your own.

In addition, good health, while it was more of a given during the years prior to the Civil War, where a lot of the work that was being done was agricultural, now was in a state of peril due to the way in which the Industrial Revolution had transformed the country’s economy and sedentary desk jobs became commonplace (1870-1914).2

Over time, the formation of church sport leagues and the building of gymnasiums would crescendo to the point where the formation of a formal association became a logical next step and this is how the YMCA got its start.

While the Y was formed in 1844 in London, it didn’t have it’s own sports facilities until the establishment of the New York City YMCA in in 1869. At the time Theodore Roosevelt was only eleven years old,  but he was raised in a household that subscribed to the “Muscular Christianity” perspective and would go on to become one of its more vocal supporters.

“Muscular Christianity,” in the context that it’s used here, is different in that while fitness is still processed as an extension of discipleship, it’s taken a step further and used to describe an intentional effort to apply God’s Word to every nuance of the human experience. Fitness, Politics, Church Life, Relationships, Culture – everything!

Moreover, one’s spiritual disciplines are pursued not just as way to endure the trials of life, but also as a way to excel (Col 3:17, 23)!

The “Prosperity Gospel” movement positions Jesus as a Holy Appliance that one uses to secure financial and material blessings. Instead of using Christ to get what you want, “Muscular Christianity” is all about obeying Christ to order to do and become more than you could ever accomplish on your own and receive all that He would give (Josh 1:8; Dt 8:18; Ps 1:1-3; Rom 12:1-2; Phil 2:13).

The goal of “Muscular Christianity” is to present Discipleship as an invitation and not just an obligation. By keeping your hand in His, He doesn’t just walk you through the fire, He leads you to the prize of time well spent, a victory well won and a life well lived (Matt 25:21). And all of this is accomplished by reeking of excellence in everything you do, think and say (Ps 19:14). That way, you’re not only getting things done, you’re doing the right thing at the right time in the right way for all the right reasons (1 Pet 1:16) and all the while inspiring others to ask you what it is that makes you tick (Matt 5:16).

The result is a game winning approach to Discipleship. We’re not just launching an effective defense by standing up to temptation, we’re running down the field and putting some points on the board. We can explain not only what we believe, but why we believe it. We make a point of staying on top of our spiritual disciplines because, not only are we supposed to in order to avoid the baggage that goes along with sin, but so we can deploy God’s Purpose, Peace and Power in a way that translates to you and I reeking of excellence in everything we say, think and do!

In addition to a number of articles on this website that cover a lot of ground, you’ve also got some specific strategies represented by a collection of resources:

Fitness: Muscular Christianity: 90 Day Workout Plan – pursuing a toned physique using the Bible as our mental starting point and then unpacking the subject of nutrition, working out everyday using a USMC approach and combining that with a daily conversation between your and your King. You can do it on your own or with a group. You’ll find a number of ideas by clicking on the “Fitness” tab on this website.

Bible Study: If you’re going to apply God’s Word to everything that’s going on in your life, you need to know how the Bible is laid out and what it says so you know where to go when it’s time to get some Answers. The “90 Day Bible Study Guide” breaks down every book in the Bible and gives you some highlights so you can see how everything “fits” and works together. It’s a great introduction to Scripture and is a great primer for more in depth Bible study.

Professional Development: “The Greatest Salesman in the World” is a book by Og Mandino that at one point was considered THE book that every business professional needed to read. It uses a clever story to introduce 10 Laws that, when properly applied, help you to succeed in the marketplace. “The Greatest Bible Study in the World” takes those laws and shows how they can be traced back to Scripture and from that standpoint, you’ve got more than just a book that shows you how to succeed in business, you’ve got a biblically based template on how to succeed in life.

Politics, History, Culture and Climate Change: “Perception Changes” is a book that looks at the things that dominate the headlines and asks the question, “What does this look like if Jesus really did die and come back to life?” Rather than wondering IF Christ’s death and Resurrection occurred, this book looks at the issues believing that He did rise from the grave and how that impacts our convictions and the way in which our “perception changes.”

In addition, you’ve got several articles that pertain to a variety of issues on this site…

The common thread being a concerted effort being deployed to craft a conclusion based on the whole of God’s Word and not just a few select verses.

I Despise My Own Life - How to Handle Depression Defense #1