Make Your Own Weather

Do not conform to the pattern of this world, but be transformed by the renewing of your mind. Then you will be able to test and approve what God’s will is—his good, pleasing and perfect will. (Rom 12:2)

Imagine your disposition in the context of either a clear, blue sky or overcast conditions. What determines the amount of sunshine that’s able to break through the clouds is the degree to which you base your perspective on Truth as opposed to your present circumstances.

On the other hand, sometimes you’re the one that’s been wronged. Perhaps there’s a supervisor that’s not approaching a situation without a full compliment of the facts and they’re being critical of your performance in a way that’s not fair or accurate. Maybe you’re up to your ears in some kind of drama that you’ve been unwillingly drawn into. Regardless of what it is that’s causing the tension, the bottom line is that your mind tends to remain fixated on your situation. You’re constantly rehearsing arguments and the whole thing weighs on you like a steady rain and constant claps of thunder. 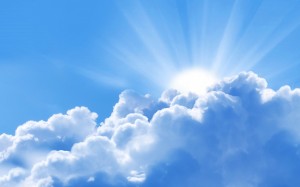 It’s one thing to say, “God’s in charge” and another thing to act out that Truth in a way that translates to an authentically optimistic and unshakeable disposition.

These aren’t just noble, little cooking tips. This is practical stuff that keeps your skies clear of the kind of cloud cover that otherwise ruins a good day.

5 Commit your way to the Lord; trust in him and he will do this: 6 He will make your righteous reward shine like the dawn, your vindication like the noonday sun. 7 Be still before the Lord and wait patiently for him; do not fret when people succeed in their ways, when they carry out their wicked schemes. 8 Refrain from anger and turn from wrath; do not fret—it leads only to evil. 9 For those who are evil will be destroyed, but those who hope in the Lord will inherit the land. (Ps 37:5-7; 9)

Verse 5-6: If you’re in the right, then you’ve got nothing to worry about. It’s going to land in a good place, but keep verse 7 in mind…

Verse 7: People appear to think with their minds, but Scripture makes it evident that you process things according to who you are and not just your capacity to reason (Prov 4:23 [NIV]; 23:7 [KJV]; Matt 12:34 [NIV]). It’s the “heart” of a human being that drives their actions and thoughts. You’re not going to change their heart, only God can do that (Jer 17:9-10). For that reason, you need to “be still and wait patiently for him.”

Verse 8: But while you’re “waiting,” don’t fret. The word “fret” in the Hebrew isn’t so much about being worried, as much as it’s about stewing over something. It’s that situation where you’re constantly rehearsing in your mind what’s been done, what you’re going to do or say the next time you see that person – it’s that collection of scenarios you’re concocting based on a combination of facts and imaginary conversations.

Nine times out of ten, you’re asserting assumed attitudes into the situation that may or may not be the case.

That’s not our cue to wander around in a way that’s obviously detached from reality. What it does mean is that you’re refraining from adopting an agitated mindset produced by fictional conversations and an unwillingness to see things from a wiser vantage point.

Your strength is rarely represented by your temper and your perspective is rarely enhanced by your anxiety. Don’t ignore the problem, but don’t let it define you. And give God the space and the opportunity He requires in order to do what only He can do. In the interim, be intentional about filling your head with excellence and in that way preventing whatever it is that would otherwise dominate your thinking, dictate your actions and destroy your confidence.

Now, go out and enjoy some sunshine!