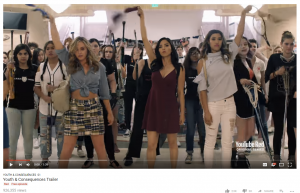 I saw this trailer and while I’m not sure what the overall message of the plot may be, it’s hard not to think of the way in which the Left has so effectively used students to give more visibility and credibility to their spin on gun control in recent days. Here’s what I’m thinking…

So, you give someone who hasn’t been on the planet for more than a decade and a half and you convince them that they know more than their adult counterparts…

Encourage them to engage their audience in a manner that is belligerent, hyper-confident and even sinister and what do you have…?

A entire demographic that sneers at any conviction that doesn’t match their own coupled with an unwillingness to consider a more comprehensive perspective on themselves and the world around them.

Because they’re minors, the law doesn’t apply in the same way and they’re able to hide behind their immaturity should they find themselves being called on the carpet for their manner or their fundamentally flawed mindset.

The only people who are affected by any kind of legislation are those who have a healthy regard for the rule of law. Criminals, by default, have no such regard. Hence, the only people that are impacted by stricter gun control laws are the victims of random shootings and not the culprits. It’s not that legislation accomplishes nothing, but in instances such as these, you’re basically trying to eliminate drug abuse by making certain drugs illegal. Or you’re attempting to reduce the number of lies being told by officially declaring falsehoods are illegal…It’s the person who pulls the trigger and not the trigger itself. Click here to read more about the issue of Gun Control and the voices that would insist that the Constitution needs to be amended.

Both the Left and their media pawns are using this resource more and more.

And it’s an easy strategy to deploy. Most of the information that is being dissimenated these days is in the context of headlines and bullet points. 3 minute broadcasts or articles that can be digested in a matter of seconds are now substitutes for real research, careful analysis and true wisdom.

A kid watches a youtube video and suddenly they feel informed and even confident in sneering at their parents, scoffing at their pastors, challenging the government and even questioning God.

Nothing is more compelling than the Truth. You hear somebody screaming their poison and challenging what’s right all under the heading of “protest,” be ready to answer and convince them that there’s more to what they’re championing than what they want to acknowledge.

And remember that rarely are going to engage someone according to their logic alone. Convictions are convoluted coctails of fact and passion. While you may not be able to change their mind in the context of a single paragraph, you can nevertheless make an impact by allowing the Rocket Sauce of the Holy Spirit to shake their heart with tremors of Truth.

Fact is, that’s the only thing that’s going to make a difference.