Do Christians Promote the Banning of Muslims? 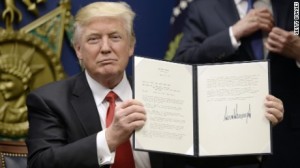 There was a sign being held up by one of the demonstrators who was protesting President Trump’s recent Executive Order that banned Muslims from certain countries from entering the United States that read, “Christians Don’t Ban Muslims.”

I would like to offer a little bit of an edit.

If the Muslims in question are coming from one of the seven countries that were identified by the Obama administration as being a threat to national security. This isn’t a ban on Muslims in general, it’s a wise move to restrict Islamic immigrants coming from countries that have gone out of their way to define themselves as threats to our safety and way of life. That’s not demonstrating a lack of compassion, that’s being wise.

There’s a difference between loving your enemy and enabling them. Understand too that the First Amendment represents two clauses: “The Establishment Clause,” which states that Congress can make no law that establishes a specific doctrine as a national religion. And the “Free Exercise Clause,” which allows a person to practice their religion provided it doesn’t adversely affect the safety and well-being of the community. If you choose to be a Muslim, you’re a conflicted Muslim if you believe that you’re not justified and even commanded to kill those who are not Muslims. According to the Quran:

And fight them on until there is no more tumult or oppression, and there prevail justice and Faith in Allah; but if they cease, let there be no hostility except to those who practise oppression. (sura 2:193)

And you also have men like Muhammad ash-Shawkani –  a respected Islamic cleric who lived from 1759 to 1834 and an authority on Islamic doctrine and law. Among his writings is a book entitled, “Alsaylu Jarar” which states:

Islam is unanimous about fighting the unbelievers and forcing them to Islam or submitting and paying Jiziah (special tax paid only by Christians or Jews) or being killed.   [The verses] about forgiving them are abrogated unanimously by the obligation of fighting in any case. (“Beyond Jihad: Critical Voices from Inside Islam” [p63])

Then of course you’ve got the directive authored by Osama bin Laden and endorsed by five Islamic caliphates which ordered the killing of all Americans. This is not a nonsensical interpretation of Islamic thought. It’s simply a practical application of the Quran. In other words, you don’t have to an extremist to be a terrorist, you just have to be orthodox in your interpretation of your creed.

So, Trump’s actions are both reasonable and wise. Those who disagree, such as those in the Entertainment industry, are not reviewing all of the facts, only those that help promote a critical assessment of the Trump Administration. Truth is, if you’re willing to lump all immigrants in a hypothetical pool regardless of their stance on terror, you’re both foolish and irresponsible and therefore not qualified to pass judgement what’s coming out of the Oval Office where this issue is concerned.

So, do Christians promote the banning of Muslims?

If they’re Muslims coming from countries that sponsor terror in the name of Allah?

You better believe it! And should there be any indignation on the part of those who feel like that’s an unfair directive, I would recommend that you direct your frustration in the direction of those who engage in terrorist activities and not those who are responsible for national security.