Half Truths and Loaded Questions | Part I – Why Doesn’t God Do Something? 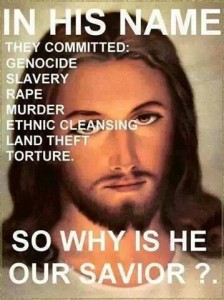 I) Intro – If You Ask the Wrong Questions…

To the right you see a series of accusations coming from the mindset of an indignant unbeliever. On the surface, one might stumble a little bit as they attempt to articulate a response. After all, some people who professed Christ as their Savior have justified some heinous acts and perspectives according to a quasi biblical sounding rationale. How do you respond and is it possible to effectively refute the indictments leveled against Christ by unbelievers who are looking to justify their lack of reverence for God?

Everyone of these questions / indictments can easily be dismantled by recognizing that they’re all designed to shift the burden of responsibility from man to God and in that way insist that God is to be held accountable for the sinful actions of the persons involved.

This is a technique that is fairly common. You see it in other scenarios as well. They’re not legitimate objections as much as they are clever strategies. Consider the following:

Question: How can a loving God send someone to hell?

Answer: How can a rational person say “No” to a loving God?

Question: How can God wipe out an entire people group including women and children?

Answer: How vile was that community that they would warrant God’s wrath to that degree?

Question: Do you think you’re better than me?

Question: Doesn’t the Bible say you’re not supposed to judge?

Answer: Doesn’t the Bible say that what you’re doing is wrong?

Question: Do I not have the right to be happy?

Answer: Do you not have the responsibility to be moral?

In each instance you have a tactic being deployed where the focus is redirected from the person being evaluated – be it their character or their actions – to the person doing the evaluation. It’s a brilliant scheme in that, not only are you able to minimize the substance of the offense, but by judiciously selecting your verbiage the accused is now the victim and everyone else that would be critical is now the villain.

This is where you get the intellectual sounding justification for the phrase “hate speech.” This is how unbelievers seek to, not only justify their atheism, but diminish the Presence of God in the marketplace in general. This is how the critics of the gospel are able to remove prayer from schools, manger scenes from public spaces and our nation’s Christian heritage from academic textbooks.

What makes this issue so crucial is that even the most casual Christian has as their philosophical starting point a respect for the reality and the necessity of Absolutes: The rule of law, a respect for a person’s office, an approach to morality that’s founded on something that transcends cultural norms…

The very essence of our country is based on the fact that we are “endowed by our Creator with certain inalienable, human rights.” We justified our independence by appealing to the Absolute of the Divine Imprint that is stamped on each one of us as individuals. When you remove God from the equation, the only absolute that remains is the notion that there are no absolutes and therefore no moral barrier to stand between you and your definition of what is best and reasonable.

There are only two religions in this world: Either God is God or man is god. While it’s possible for a person to be moral apart from God, it is nevertheless their definition of morality that they subscribe to and it is their choice whether they abide by it or not. In short, they are their own absolute.

Not all Republicans are born again and not all Democrats are unbelievers. But 69% of atheists identify themselves as Democrats which makes sense given some of the talking points that are championed by the Democrat party:

The point is that this is not a “theological” discussion. This is about the philosophical foundation upon which one builds their convictions pertaining to morality, government, finances – the human experience in general. When you pop the hood on the debates, the protests, the headlines and the political rhetoric that shapes our culture, it is one’s regard for Divine Absolutes that forms the basis for a person’s convictions.

According to the Pew Research Center, the number of atheists in this country has doubled since 2014. When you look at:

…this is more than just a discussion of one’s metaphysical temperament. This is a contest between those who would retool the moral and spiritual fabric of our country and those who seek to preserve the spiritual foundation upon which we’re built. And it’s no longer a conversation characterized by respectful dialogue nor is it limited to Executive Orders and the federal government. It is a war between those who insist that man is God and those who maintain that God is God. Either God is the Absolute Who we look to for both policy and salvation or man is the bottom line for this life and the next. Never before has the tension been more palpable and rarely has the sense of urgency surrounding the ability to defend one’s faith been more intense.

This is part one of a series of installments that will look at some of the half truth and loaded questions circulated by atheists in an attempt to undermine the substance and the advantages represented by the Gospel. While we will look at the questions in the introductory graphic, let’s start with one question that is often heard: “Why does God allow the innocent to suffer?”

II) Why Does God Allow the Innocent to Suffer?

According to the image you see to the right, God is cruel and indifferent. While He has the ability to step in and protect children who are being beaten by abusive fathers, He doesn’t. Instead, He ignores their pleas and allows them to be emotionally scarred and physically damaged. If God exists at all, He is worse than a joke, He’s despicable.

Going back to the observations made in the Introduction, while it’s a clever strategy it is nevertheless a pointless tactic to try and shift the blame from man to God when it comes to the sinful and heinous acts of humanity.

Beyond that, however, C.S. Lewis once said, “There is nothing so self defeating as a question that is not fully understood when it is fully posed.” This is an example of a question that is not fully understood in that you’re saying that unless God prevents Timmy’s father from abusing his son, then God is not the Just and Powerful Deity that the Bible proclaims Him to be. He is Just and He is Powerful, but it’s up to mankind to acknowledge Him as such. God does not force man to comply, He gives him the ability to choose and it’s that freedom of choice that defines the human paradigm.

Secondly, while Timmy is obviously being hurt, ultimately the One Who Timmy’s father is sinning against is God (Ps 51:4; Lk 15:18). Here is where the question being asked is revealed as something that goes beyond Timmy’s welfare.

As a human being, Timmy’s dad has the ability to choose whether to honor God or to rebel. It is his job to love and protect his son (Eph 6:4). It is also his choice (Josh 24:15; Gal 5:13). Protecting Timmy, in this instance, means more than God simply preventing Timmy from being hit. It means that He has to alter the terms of the contract that He has made with every human being as far as giving them the option of either loving Him or despising Him.

On the surface, that is not an entirely satisfactory answer. Timmy still has scars. It would be great if God stepped in every time something heinous was about to occur:

Now you have a situation where some will attempt to qualify when God asserts Himself, but you can’t have it both ways. You’re either a human being with the ability to choose, or you’re programed organism that’s obligated to comply.

The great thing about having an option is that when you choose to love God, it is love and the things that God designed to occur within the context of that voluntary relationship between Himself and His Creation can happen (Jn 10:10). But if it’s nothing more than a prearranged affiliation, it isn’t love. There’s no relationship, there’s no interaction – there’s no pulse.

But on the other hand, in order for love to be possible, indifference and even hatred have to be viable alternatives. And the greater the distance between you and God, the more likely the thoughts and actions of one who perceives himself as his own absolute stand to become more sinister and damaging.

It’s not God’s fault that man chooses to rebel against Him. The questions atheists ask in an attempt to discredit God intentionally sidesteps the human element that is to be held accountable. And even if God were to assert Himself in order to prevent the sinful actions of humanity from occurring, He would have to alter the contract He’s made with the human race that allows love to occur in the context of a choice. Having that option, while necessary, also allows for the antithesis of reverence and obedience to flourish. In the end, it’s not, “Why doesn’t God do something?” It’s, “Why does mankind choose to loathe his Creator, his Redeemer and his King?”

If your evaluation of God assumes the presence of human flaws, then His Actions can never fully resonate as Holy let alone Just.

Very Pleased to Meet You, Ms. Paglia Gun Control or Self Control