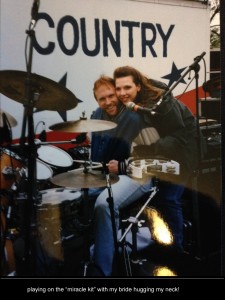 Sometimes, it’s hard to stay motivated. You wake up in the morning and it feels like everything within your field of vision needs to be fixed or replaced. Of course, that’s not going to happen. Every payday begins with a slight feeling of euphoria as your checking account is momentarily bloated, but then, after paying bills and forecasting the obligations that will manifest themselves in the next few weeks, that dollar amount appears pathetically wanting.

You bring your requests before your King and you catch yourself sounding as though you’re whining. You’ve got enough of the Truth to know that it’s good to ask (Matt 7:7; Lk 11:1-12) and you need to keep at it. But, sometimes it’s difficult to not feel as though you’re in a hole and there’s not much hope of being able to pull yourself out and feel the sun on your face.

This morning as I was sitting down with my Heavenly Father, going down my list of concerns and requests, I mentioned to Him this feeling of frustration – knowing that it was a pointless, waste of energy. He responded by bringing to mind an experience I had several years ago. There have been several such scenarios since then, but He used this one to remind me that there’s always a good reason to be motivated and to be optimistic about the road ahead.

I had my gear loaded in my Dodge Omni. It was stuffed to the gills with my drums and my sound system. My parents were staying with me that week in my one room studio apartment. The plan was for me to ride with them to Illinois where I would watch my brother in law receive his Master’s degree and then I would fly back, jump in my car and head to Florida where I was going to work for a week as a Youth Group’s Worship Leader.

Just so you can catch a clear vision of where I’m at, let me paint you the picture. I had recently concluded nine years of military service. I had opted to get out, rather than continue my enlistment because I wanted to move to Nashville and make my living as a musician. Despite a very visible and rewarding first gig, where I travelled around the country as part of a touring act that was playing before packed arenas every weekend, I was now answering phones at a local publishing company making minimum wage. Although that job was anything but lucrative, it was a welcome change in that before that I had worked for a buddy at the Chick Fil A restaurant he owned which had me smelling like a chicken nugget every night as I returned home to an apartment that can only be described as “humble.”

In my fridge was a gallon of milk. My cupboard had a box of Raisin Bran. I existed on leftover Chick Fil A food and an occasional bowl of cereal. My rent was a little over $200.00 a month and that included utilities. I was usually able to keep that wolf at bay with my CFA money, combined with any extra funds I was able to earn as a drummer. I was currently rehearsing with a group of exceptional musicians. We had formed a band and we would rehearse a couple of times a week, sometimes to the early hours of the morning, hoping for an opportunity to one day showcase our wares before some decision makers that could put the wheels of a Country Music recording contract into motion.

I had earned a degree in Business Administration while still enlisted, but I was intentional in choosing a line of work that could better accommodate my schedule as a working drummer. It wasn’t always practical to define myself as a “working” drummer, but I encouraged myself with the idea that one day, that goal would be realized and all of these inconveniences would be validated as trivial sacrifices made for the sake of a prize that was well worth the effort.

The morning I woke up to depart with my parents, I went out my front door and cast a quick glance over to my phone that was yet another reminder of my tight, financial situation. It had been turned off because of my inability to pay the bill. I brushed that thought aside as I made my way to my car. From a distance, I could tell something was different. Rather than the silhouette  of my drums, guitar and sound system filling out the profile of my automobile, instead it looked strangely empty. Sure enough, upon getting closer I could tell that I had been robbed. Everything was gone.

I didn’t have health insurance, I certainly didn’t have anything that covered my gear. Every hope, every aspiration had been pinned on the equipment that was now gone. I should mention that there was also a multitrack recording device that had all of my tracks on it. So what was a “one man band” resource, was now simply “one man.”

Of course, you call the police when something like this happens. Alas, I had no phone service so I had to walk with my father up to the corner convenience store and report what happened from a pay phone. Later my Dad confided in me that in that moment, he was wondering if I wouldn’t be better off moving back home to upstate New York. After all, for all intents and purposes, there wasn’t anything for me here anymore. My whole livelihood and future had been seemingly wiped out.

Over the next couple of days, thanks to some friends, I was able to reproduce the musical background tracks I needed to do my gig. My folks headed up to Illinois to attend their son in law’s ceremony while I labored to get back on my feet. A friend let me borrow his drum set and I was able to honor my commitment in Florida. As I drove back to Nashville, I was doing all I could to figure out how I was going to come up with the cash needed to replace a collection of resources that easily topped several thousand dollars.

There was no way.

I was active at my local church. Word about my situation got around and a collection was taken up. A little over $1,000.00 was collected by the class that I taught and the church orchestra I played in, and while it was very much appreciated, I knew it wouldn’t be enough to purchase the professional level set of drums I needed.

I noticed an ad in the paper for a used kit. It was an older Pearl set, which is a great brand. I went out to look at it and it was wonderful, but when I told the seller what I had to offer, he graciously refused. I don’t even remember giving him my phone number – it was that conclusive. What I was offering wasn’t an option and giving him a way to get a hold of me wasn’t perceived by him as necessary.

The following days were somewhat challenging, given the the fact that what I would normally default to in order to stay motivated, was now a huge question mark. The Country band that I was rehearsing with was still practicing. My friend had loaned me his kit for an indefinite amount of time, so I was “stable” from that standpoint. But my whole paradigm had been stripped to a shell of its former self. Not just my equipment, but years worth of programming and producing were gone and with it my ability to supplement my meager income as well as a realistic basis for an optimistic perspective on the future. Though I never seriously considered moving back to New York, everything that was potentially defeating about the way I existed and “got by” was now amplified. My dirty, little apartment. My lack of a good paying job. My hopes that the band I was rehearsing with might one day get a record deal – everything looked like an unreasonable long shot and a cloud of heaviness hovered over the horizon every morning as I got ready to start the day.

One afternoon, I’m answering phones and the gentleman on the other end asks me if I’m still interested in his kit. He explained that I was the only one who had responded to his offer and he was leaving town the following day. I said “Sure!”

While I had been temped to spend the money that had been taken up to help buy another set of drums, I had received some Providentially timed counsel to hang on to that money, even though everything “practical” within me said that I should be using that cash for other things. I took that cash over to the gentleman’s apartment along with a friend of mine who came with me to help transport everything back to my place.

I needed help because for the money that I gave this gentleman, this is what I got:

In short, it was a huge step forward in terms of the drum set resources I now had. When you consider the dollar amount that I gave this guy, it’s amazing. What’s even more amazing is I don’t remember giving this guy my phone number, let alone my work number. Still, he called me to let me know that the drums were mine if I still wanted them.

That kit would be used to, not only help supplement the income I was making at the time, it would also go on the road with me as I traveled all over the country as part of a band called “Western Flyer.” WF would get a record deal and be featured on the top forty Country Radio charts. Every picture that was ever taken, every video that we ever made shows me sitting behind the set of drums that miraculously replaced not only the resources I had lost, but provided a lesson as far as the way God can pick you up and move you forward when you can’t even sit upright.

Today that kit is owned by the church I currently serve at. I see it every morning on the platform. I’ve never lost my awareness of what that set represents, but I don’t always return to that experience when I’m faced with a similar situation, as far as a seemingly insurmountable obstacle standing between me and something I’m hoping for. But this morning, as I was conversing with my King, He brought that adventure to mind and it resonated in me almost as strongly the night I was going up and down the stairs with my buddy, bringing in to my apartment my new arsenal of percussive wares.

It’s not always easy to stay motivated. But then again, it’s not difficult at all when you let God pull back the curtain on those past triumphs He orchestrated in your life that moved your forward in a way that can only be described as miraculous. And there ain’t nothing like the “miraculous” to put a smile on your face and a determination in your gut to keep moving forward and to keep dreaming.

You smell that? That’s the aroma of a great day! Bring it!