You Are Responsible For Your Actions, But… 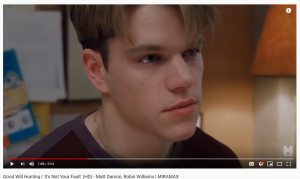 Good Will Hunting | “It’s Not Your Fault”

I’m a firm believer in that you are responsible for your actions, You can play the victim card as convincingly as you want, but in the end if you do the crime, you do the time.

There are a couple of videos that make me weep because I see in them a sinister seed that takes root in a young person and it just grows and grows. It never stops sapping the life out its host and it surfaces in behavior that is as nonsensical as you can imagine.

That’s part of what makes the actions of a punk or a thug so hard to process. You want to understand what it is that drives them so you can better refute their argument or talk them down off the ledge before it gets ugly.

But you’re not going to “figure them out.” Because lurking in the shadows, a million miles away from the situation, yet close enough to hear it breathe is a monster that started out as a seed but is now a fully matured beast that whispers lies and smiles as its victim just goes along with what it says.

I’m talking about Dads who abandon their sons and daughters.

I was listening to Larry Elder being interviewed this morning. He’s called every name in the book by the Black community because he insists that the biggest problem facing African Americans today is the rate at which the single parent family is growing. And by “single parent,” I mean a single mom because Dad has moved on.

And it’s not just the Black community, it’s everywhere. And Dad doesn’t have to be gone, he can just be absent in the context of being a loving, selfless father who places the needs of his family above his own.

It doesn’t sound that significant, does it? We live in a society where the headlines are constantly touting the idea that there are no real absolutes. Homosexuality, Transgenders, the Rule of Law – even the idea that a person is responsible for their actions – is constantly undermined while the notion that man is his own deity is aggressively promoted.

You won’t hear it articulated that way, but that’s the bottom line.

And it sounds good! No restraints, no consequences, no responsibilities. Just your passions and the ever ready excuse that you’ve been somehow denied or violated is poised on the tip of your tongue with a thousand reporters and activists ready to agree with you and publish your story on the news.

Of course you’re responsible for your actions and there are moral Absolutes. Yeah, Jesus did die and He did come back to life so the Bible is not merely the topic of some debate show that wants to sell you on some garbage that says the Middle Ages equates to the gospel.

But put all that aside for a moment and take a moment to appreciate the fact that there are some truly tragic souls walking around today. Whatever their disposition may be, as far as their politics or their definition of social justice, there’s that “seed” that was planted several decades ago and there’s no way you can ignore it and there’s no way you can separate it from their rhetoric or their behavior.

A solid father figure is irreplaceable. However noble or effective a woman may be as a single mom, there’s a gap in a person’s psyche that is designed in such a way where the only thing that can authentically fill it is a responsible, loving father.

It’s that person that’s going to love and encourage you. He’s going to set an example and he’s going to show you what strength and honor looks like. He’s going to be a reflection of your Heavenly Father and it’s the combination of your mother and your father that you’re going to embrace the Truth of Absolutes and benefit from the way those Absolutes provide a psychological and emotional foundation that will allow you to love yourself and others.

There are no substitutes.

And this nonsense that says it’s all about being happy and that you can create your own game board and play however you want?

Happiness is more than a mood. And if everything you’re depending on to make you happy represents a collection of goal posts that never stop moving, then you’ll never be happy. You’ll just be distracted.

And as far as making up your own rules?

If Jesus had never died and come back to life, you might have a point. But the Resurrection qualifies everything. If you’re going to be truly happy, you have to follow the instructions on the box. And that’s not another list of rules and restrictions as much as it’s a couple of quality guardrails that prevent you from driving off into the gutter and getting hurt.

And the thing is, you know all of this. Deep down, you see the stars in the sky, you see the evidence of Something and Someone greater than yourself but there’s a hole in your heart that aches and it’s hard to believe that there can be a happy ending to virtually anything because you’re caught up in a plot where where the monster seems to always win.  You’re just so accustomed to it that you don’t think about it until something triggers a memory. It could be a song or maybe a scene from a movie where art suddenly becomes a shaft of light that shines on the beast and you’re reminded of how all that should be in place is desperately absent.

A therapist can’t fix it and a good cry isn’t going to settle it.

It’s only the problem solving, life transforming Power of God’s grace that changes the way you see yourself and the world around you that breathes new life into your heart and the monster that was looming large in the corner…

Here’s the thing: In some instances, life is a lot harder than it needs to be because of the Dad that was never there. But you do have a Father in Heaven and the more you know Him, the more you can take what would otherwise be an ever present mountain of pain and let it go.

And while the memories are still present, there is now an eternal Perspective that allows you to process it and move on rather than be crushed by it and never heal.

You are responsible for your actions, but…

Before you attempt to assume responsibility, take attendance. Look to see if that monster is present and tell him that his lease is over and he needs to leave. He’s not going to listen to you, but he will bolt the moment you invoke the Name of Jesus and allow the Power of the One Who put you on the map to begin with cure, solve and heal all those things that would otherwise weigh you down and ultimately destroy you.

Impeachment Pop Quiz I Was Only Joking...