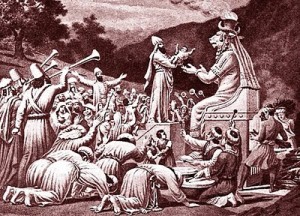 The Conquest of the Promised Land was a series of military campaigns led by Joshua (see Josh 12). The mission was to completely destroy the Canaanites and settle the land that God had promised Abraham in Genesis (see Gen 13:14-17; 15:19-21). That same land, by the way, is the land that the nation of Israel occupies today.

Some process the violence initiated by the Israelites against the inhabitants of Canaan as being similar to the way in which other nations throughout history have determined to overwhelm neighboring countries and expand their borders and influence by force.

But the Conquest of the Promised Land wasn’t a self absorbed determination to divide and conquer. For all intents and purposes, Israel was hopelessly outgunned and outnumbered from the start. They were hardly a threat, let alone a force, to be taken seriously by any of the fortified cities and established armies that comprised the area of Canaan (Numbers 28-33). The reason Israel triumphed was not because of their military might or because of their superior rating in the eyes of God (Dt 9:1-6), rather, it was because the Canaanites had become so decadent and so heinous in the eyes of God. Israel was merely an instrument of Divine Judgement (Dt 9:4).

But who were the Canaanites and what had they done that made them such an irritant in the eyes of God?

Who Were the Canaanites?

When Noah’s voyage came to an end, he left the ark with his three sons: Shem, Ham and Japheth. From these three boys came all of the nations that are scattered around the earth to this day (Gen 9:19).

Ham was a problem child and his rebellious nature was passed on to his sons, who you see listed in Genesis 10:6: Cush, Mizraim, Put and…Canaan.

In verse 15, you see the sons of Canaan listed. Taken together, these families / tribes comprised the people group collectively referred to as the Canaanites. They were a wide spread group and as they lived and prospered, their territory grew. But as their landholdings increased, so did their decadence and perversion. You see that in Genesis 24:3 where Abraham asks his chief servant to swear that he would not get a wife for his son Isaac among the Canaanites who he could see were degenerating into a life of wickedness. He also knew that however heinous the Canaanites were at the time, their conduct as well as their prospects would only get worse based on the fact that God had already told him that their land would be given to him.

By the time Moses and Joshua began what was actually God’s “clean up” operation in Deuteronomy 2-3, the pagan practices of the Canaanites were in full swing.

The religion of these pagan people were basically a fertility cult. At temple scattered throughout their land, Canaanite worshipers actually participated in lewd, immoral acts with “sacred” prostitutes. Theirs was a depraved form of worship that appealed to the base instincts of man’s animal nature.1

But more than just depravity, part of Baal worship included sacrificing children by burning them alive (2 Chron 28:2-3). In light of this kind of lifestyle and behavior, you can see why God’s anger would be peaking. And that’s why, in some cases, God instructed the Israelites to destroy entire cities and leave nothing alive. Deuteronomy 20:10-15 instructs the Israelites to make an offer of peace to neighboring cities that were not within the explicit borders of the Promised Land. But verses 16-17 says to kill anything that breathes that lives within the walls of those cities that warranted the full wrath of God. That included women and children.

Why would you kill women and children? Do they not merit a kinder and more gentle treatment?

In Genesis 15:16, God is talking to Abraham and states how in the fourth generation of his family, his descendants would come back to the land he was living in presently and claim it as their own. There would be a bit of a delay because, “the sin of the Amorites has not yet reached its full measure.”

Just how sinful many Canaanite religions practices were is now known from archaeological artifacts and from their own epic literature, discovered at Ras Shamra (ancient Ugarit) on the north Syrian coast beginning in 1929…Their “worship” was polytheistic and included child sacrifice, idolatry, religious prostitution and divination. God was patient in judgment, even with the wicked Canaanites.2

A generation, in this instance is 100 years. 400 years later, you see that prophecy coming true in Deuteronomy 2. This is one of the first areas that were conquered by the Israelites as they entered the land of Canaan after 40 years of wandering in the desert. Every town belonging to Sihon, king of the Amorites, is completely destroyed. Matthew Henry, in his commentary, elaborates:

They put all the Amorites to the sword, men, women, and children (v. 33, v. 34); this they did as the executioners of God’s wrath; now the measure of the Amorites’ iniquity was full (Gen. 15:16 ), and the longer it was in the filling the sorer was the reckoning at last. This was one of the devoted nations. They died, not as Israel’s enemies, but as sacrifices to divine justice, in the offering of which sacrifices Israel was employed, as a kingdom of priests. The case being therefore extraordinary, it ought not to be drawn into a precedent for military executions, which make no distinction and give no quarter: those will have judgment without mercy that show no mercy. 3

This was not “business as usual.” As has already been pointed out, not every city / people group was put to the sword. But those who had distinguished themselves by wallowing in the kind of decadence that equated to spitting in the face of God over and over again – as Matthew Henry pointed out – it wasn’t a military action that was directed towards the Amorites, it was the wrath of God being prosecuted in a way that resulted in the total destruction of an entire nation.

Again, this was not a template, nor a precedent, but it’s an example of what can, and often does, occur to a nation that doesn’t just turn their back on God, but runs in the opposite direction over a period of centuries and by so doing sinks deeper and deeper into a pit of depravity that ultimately becomes their grave.

There are scores of commentary and attempts to reconcile the idea of a loving God with genocide. Some want to suggest that the Biblical text is a form of hyperbole – that what we read as a slaughter of innocent women and children is a figure of speech and nothing more.

Anytime you’re inclined to think of God as cruel, you have to go back to the cross. With that one event, you have the ultimate exclamation point, as far as God’s unconditional love for all people (Rom 5:8). Is God capable of being a tyrant? The answer is “Absolutely, not!” Just? Yes. Cruel? No.

As far as human life is concerned, regardless of the age of the person in question, that individual was created by God (Ps 139:13). From that standpoint, we belong to God and our lives are ultimately His to do with as He pleases (Ps 24:1). Rebuking God for the way in which He handles that which belongs to Him falls short of what’s logical and appropriate. And while some are quick to say, “But He has no right to be cold-hearted.” Again, the cross reveals that assertion as having no basis in fact. In addition, God’s essence is holy and completely devoid of anything evil (Job 34:10; Ps 77:3; 1 Jn 1;5; Jas 1:13). So, should He choose to do something that appears harsh, one can rest assured there’s a holy agenda being served (justice, punishment, discipline) as opposed to something sinister.

3. More Than a Moment

When we see an infant, we see the innocence and helplessness that defines that child at that moment. On the other hand, God sees their entire life laid out before Him. It’s not a life that has never been lived, it’s a known existence from start to finish. If God chooses to bring that person home before they’re born, it could very well be an act of mercy if that child is to grow up and do all kinds of evil. By bringing that child immediately to their eternal dwelling, they’re prevented from condemning themselves as a result of their sin.

As a side note, is it not ironic that many of those who are indignant with God, as far as Him commanding the death of infants and children, have no problem with babies being destroyed in the context of abortion?

While in most cases, it’s unfair to pit a man against a woman, in terms of physical strength, it’s neither wise nor healthy to suggest that a woman cannot pose a very real threat.

Consider Jezebel. She was the wife of King Ahab. In 1 Kings 18, you see her behind a campaign to kill all of the prophets of God in Israel. In the next chapter, after a brilliant display of God’s superiority over the Baal and his prophets that was facilitated through Elijah, Elijah now is running for his life in order to escape the indignation and the wrath of Jezebel (1 Kings 19:3).

She was hideously evil (1 Kings 9:22; 21:25-26) and ruled over Israel through her sons after the death of her husband for a period of 10 years. In the end, she died a very violent and gruesome death (2 Kings 9:30-37) – a destiny that was prescribed in 1 Kings 21:23 as a punishment for the vile acts she committed against God and her subjects.

Jezebel demonstrates that one’s gender doesn’t limit the atrocities one can commit against God. No doubt, the females within the Canaanite  community, given their reverence for Baal, were guilty of similar behaviors and were therefore deserving of the same kind of fate.

Anytime you’re confronted with a Divine act or behavior that seems out of Character for God, you’re being wise by establishing the cross as your starting point and from there allowing for the fact that there is such a thing as justice and there is such a thing as discipline. Our perspective is limited (Is 55:8) and we’re not capable of seeing the big picture. Given those two dynamics, it’s more than appropriate to trust God even though certain aspects of a situation lack the kind of bottom lines we would prefer.

But regardless of harsh God’s Judgment was against the Canaanites, the fact was they were living a life and revering a standard that taunted the Reality of God. While grace is always available, it is possible to incur the wrath of your Heavenly Father? How?

Elevator Pitch Islam, Syrian Refugees and How to Love Your Enemy