Financial Planning When You’re Not, You Don’t, You Can’t and You Won’t 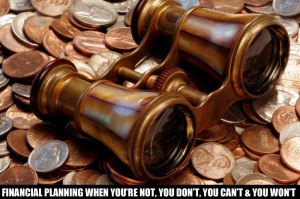 What distinguishes those two extremes is not always readily apparent. However noble a particular venture or desire may be, apart from being intentional about your relationship with Christ, “compromise” poses as “reasonable” and you’re on your way to something unhealthy (1 Pet 5:8).

But assuming you’re on top of your spiritual game, you’re quest for more in the way of material resources is not so much about satisfying a selfish agenda as much as it’s a desire to bless others. Perhaps you want to alleviate someone else’s angst over a financial burden, maybe you just want to surprise someone with an unexpected blessing. Whatever the reason, it’s an honorable one, but regardless of how hard you work, how hard you pray, your hand keeps getting slapped by different forms of discouragement. Whatever “financial planning” you would like to do, you can’t, because you’re not, you won’t,  and you don’t.

It’s not a negative disposition, it’s not a lack of confidence. It’s a fact.

And being a person of faith, you’re more than willing to believe that God can completely transform your situation. But that can make it even more exasperating in that He’s not responding and your situation, rather than being remedied, continues to drag on and on.

It’s interesting  that when God finally responded to Job’s plea for some kind of explanation as far as why he was being allowed to suffer the way he was, God didn’t start by apologizing nor did He let Job in on the conversation with Satan that had set the stage for the disasters that Job would have to contend with. Instead, God’s first comment to Job was:

“Who is this that darkens my counsel with words without knowledge? Brace yourself like a man; I will question you, and you shall answer me.” (Job 38:2-4)

In the verses that follow God’s introductory statement in Job 38:2-4, He enumerates various examples of His Absolute Authority in the context of creation. His Attributes are so obvious and so overwhelming that Job, who is still in the throws of physical pain and emotional despair, does a complete one eighty. However “deserving” he felt a moment ago, as far as some kind of rational explanation for everything he’s had to endure, he enthusiastically embraces the opportunity to simply revere his King.

He goes as far as to say “I repent in dust and ashes.” (Job 42:6) He says that because he’s awestruck by the Grandeur or God. The instant God appears, His Perfection effortlessly overwhelms whatever indictments Job had prepared and the only thing that registers as present and worthy of consideration is God Himself.

A Position of Strength

It’s imperative to realize that Job’s response is not fearful, nor is he begrudgingly  admitting a subordinate position relative to God’s Omnipotence.

Confronted with a clear view of God’s Reality, He figuratively runs to God’s Throne and drinks in every drop of Substance and Glory that emanates from it. And while it may not change Job’s situation, it completely changes Job. Rather then feeling like a hopeless victim of unfortunate circumstances, he’s now on his feet and facing his situation from a position of strength.

By reminding Job of Who it is that commands every nuance of creation, Job is able to perceive the true nature of his status. It is neither random nor is it intimidating when viewed from the perspective that recognizes God’s unchanging commitment to his welfare and the subsequent sense of Purpose that now characterizes every aspect of his dilemma.

David’s being pursued Saul who’s determined to kill him. Things were looking especially bleak in that Saul was closing in and David’s options were nonexistent. That is the setting for Psalm 16. At one point, he says:

The boundary lines have fallen for me in pleasant places; surely I have a delightful inheritance. (Psalm 16:6)

Strange verbiage, considering it’s coming from someone being hunted and on the threshold of complete destruction.

David would be delivered and he would go on to great things. But the point here is that David penned this Psalm at a point where he could say with confidence: “I’m not, I don’t, I can’t and I won’t.” But David was also aware of the fact that his plight was not based solely on what he could see or what he could control. He knew that, not only God CAN deliver, but He IS in the process of doing that presently.

That’s the Truth that needs to be recognized. God hears and God answers. There’s no disconnect and there’s no delay. His response is exactly what it needs to be in order for His Purposes to be accomplished. And while His Purposes don’t always include the immediate relief you’re hoping for, the fact of the matter is, you’re being heard and your situation is being addressed. You can, you are, you will and you do.

You can, you are, you will and you do.

Job’s pain did not go away in Job 38 and David was still several chapters removed from becoming king of Israel as God had promised. But in both instances, they experienced the same strength that you and I have access to right now. The perspective that gives meaning and purpose to the pain, the mindset that’s founded on God’s Awareness and Power and the disposition that’s authentically optimistic because of Who it is that’s Ultimately in charge.

It’s the basis for the contentment that Paul refers to in Philippians 4:13 and it’s the Truth that gives us what we need to not only endure, but to excel and to grow into the enhanced character that God has designed us to become.

You are, you can, you will and you do.

I Can't Find My Keys A Position of Strength