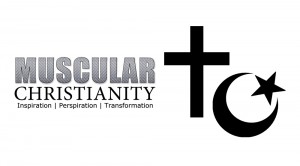 Recently a buddy of mine was comparing the Bible to the Koran in the context of commenting on some of the atrocities being committed by Isalmic terrorists. A couple of specific quotes fired me up and I wrote the following.

Bear in mind, he and I sit on different sides of the aisle when it comes to Christianity in general, but there are people who sit in a pew every Sunday who can’t tell you what they believe and why. It’s their casual regard for their creed and their lack of basic knowledge when it comes to Scripture that can lead to a less than informed perspective when it comes to processing Islam, especially the way some will assert that the same kind of terrorist actions have been commited under the heading of Christ. When you take the time to pop the hood on what’s being said, while it may not be a call to arms, it is certainly an admonishment to be wise.

If you’re going to going to compare my creed and my King to Mohammed and Islam, let me help you out with a couple of specifics that you need to be aware of.

First off, you mention how the Bible says to “stone your daughter and other barbaric acts too numerous to mention.” The passage you’re referring to is Deuteronomy 22:13-30. Jewish Law can be broken down into three sections: Judicial, Ceremonial and Moral. The passage you’re referring to is categorized under the “Judicial” heading. Adultery – having sex with someone other than your spouse – was a capital offense (Lev 20:10). In this instance you’ve got a young woman who’s engaged, and while the ceremony has yet to happen, she’s considered betrothed in light of her having accepted her fiancé’s proposal. Knowing the penalty and being fully aware of the shame she brings on herself, her family her husband to be and her God, she decides to accept and inflict all of that in exchange for a moment of pleasure. That’s not mere promiscuity, that’s a pathologically twisted and selfish perspective.

You’re right in saying the New Testament changed things in that the Ceremonial and Judicial Law were no longer binding and situations like what’s referred to above were not punished in the same way (see Jn 8:1-11). That doesn’t mean that daughter above was any less wrong. God puts up varying levels of boundaries in proportion to the damage that can be done should you cross that line. Lying and stealing required some kind of recompense (Lev 6:1-5; Dt 19:19). Adultery and Murder were handled differently in that you were put to death (Num 35:16). That’s not barbaric, that’s wisdom given the way those actions can ruin lives and it’s the severity of the punishment that we can look at now, not so much as a guide for how to administer justice as much as it’s an alert to the kind of behavior you want to stay clear of.

As far as the “Lords and Kings that murdered all non-believers in the name of the Pope and Jesus” consider this: In 638, Omar took Jerusalem from the Jews. It wouldn’t be until 1096 that the Pope would call upon the people of Europe to liberate the Holy Land. If it was the Islamic control of Jerusalem that was the central reason behind the Crusades, then it follows that a military effort would’ve been launched well before Urban II declared that Christ had commanded it. But the Muslims’ control of the Holy Land was never an issue to the Pope until the Seljuk Turks made it clear that they were planning on expanding their influence to include Constantinople. At that point, Alexis I, the emperor of the Byzantine Empire humbled himself before the Pope and offers him the opportunity to assume control over the Greek Orthodox Church (the respective popes of the Roman Catholic church and the Eastern Greek Orthodox church had excommunicated each other).3 This was an unprecedented act of submission and demonstrates the sense of urgency Alexis I felt as he looked over the horizon and saw the coming of the Turks. But it was the way they threatened his kingdom and not his worship that drove him to seek help from Rome, and it was Pope Urban’s quest for power that drove him to respond to Alexis’ request for a band of mercenaries with an immense host of European soldiers.

In short, the “Kings and Lords” you refer to weren’t believers championing the gospel as much as they were leveraging the “look and feel” of the gospel in order to achieve their own ends.

As far as Islam being a “peaceful” religion, Bush wasn’t wrong when he said that the “face of terror is not the true faith of Islam” in that many Muslims will focus on passages in the Koran such as:

There shall be no compulsion in [acceptance of] the religion. The right course has become clear from the wrong. So whoever disbelieves in Taghut and believes in Allah has grasped the most trustworthy handhold with no break in it. And Allah is Hearing and Knowing. (sura 2:256)

Then declare what you are commanded and turn away from the polytheists. (sura 15:94)

The problem however, is that later passages were written that some interpret to be nullifications of the previous texts. Verses like:

And kill them wherever you overtake them and expel them from wherever they have expelled you, and fitnah is worse than killing. And do not fight them at al-Masjid al- Haram until they fight you there. But if they fight you, then kill them. Such is the recompense of the disbelievers. (sura 2:191)

That’s the plight of Muslims in that while they can legitimately claim to be peaceful, the fact is they’re hard pressed to condemn those who are not because the militants will respond that they are merely being obedient to other sections of the Koran.

The fact is, Islam and Christianity are NOT the same. My God doesn’t expect people to get their act together before He’s willing to consider them. He sent His Son to bridge that gap while Allah simply expects you to pray and be pious. Unless you really want to win his favor – at that point you need to engage in the lesser jihad which is killing in the name of Allah. Should you have any question about that, feel free to peruse the Fawah authored by five Islamic caliphates on February 23, 1998 which includes the following statement:

The ruling to kill the Americans and their allies — civilians and military — is an individual duty for every Muslim who can do it in any country in which it is possible to do it, in order to liberate the al-Aqsa Mosque and the holy mosque [Mecca] from their grip, and in order for their armies to move out of all the lands of Islam, defeated and unable to threaten any Muslim. This is in accordance with the words of Almighty Allah, “and fight the pagans all together as they fight you all together,” and “fight them until there is no more tumult or oppression, and there prevail justice and faith in Allah.”

If you’re interested in reading the whole thing, head out to http://www.fas.org/irp/world/para/docs/980223-fatwa.htm

Bottom line: Mohammad’s last wife was six years old and the union was consummated when she was ten (http://en.wikipedia.org/wiki/Aisha). Much of Islam’s growth has been promoted under the heading of “die for Allah” whereas my Savior lived a sinless life and died for me. However butchers and so called saints have abused Scripture in order to substantiate their actions, it was an abuse of Scripture, not an application of it.

Is this a call to arms? Not necessarily, but it is certainly an admonishment to be wise. George W. Bush did well to emphasize the peaceful tenets of Islam ,but at its core is a doctrine of terror and that needs to recognized for what it is.

You're Missing the Point COEXIST