Christianity – It Cannot be Believed by a Thinking Person 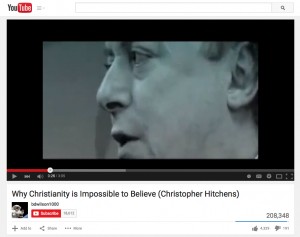 But in your hearts revere Christ as Lord. Always be prepared to give an answer to everyone who asks you to give the reason for the hope that you have. But do this with gentleness and respect, (1 Pet 3:15)

There are a number of very vocal and very articulate people out there who sneer at Christianity, as though it were a preposterous notion to subscribe to something so ridiculous. Christopher Hitchens is one of those people. In this installment of MC, we’re going to take a look at some of what he says and offer a rebuttal that reveals his platform as flawed, limited and nonsensical.

Hitchens was born in 1939 and recently passed away in 2011. He was an English writer who spent a great deal of time in the US and eventually became a citizen. A gifted speaker, he was a forceful orator, especially when it came to the issue of religion. At one point, he said that a person “could be an atheist and wish that belief in god were correct”, but that “an antitheist, a term I’m trying to get into circulation, is someone who is relieved that there’s no evidence for such an assertion”.1 Richard Dawkins, a British evolutionary biologist and an avowed atheist, said of Hitchens, “I think he was one of the greatest orators of all time. He was a polymath, a wit, immensely knowledgeable, and a valiant fighter against all tyrants, including imaginary supernatural ones.”2

Today we’re looking at one example of Hitchens’ commentaries on Christianity which you can find on youtube at https://www.youtube.com/watch?v=YbOUBUVLvKw. Here’s a brief summary of some of what he had to say:

Privacy, in this instance, is an issue only if you’re interested in hiding something from God. And the only reason you would be interested in hiding something is if you had something you were hesitant to divulge before Him. In other words, you, like Cain, are trying to slip by unnoticed in order to preserve the illusion that you are blameless (Gen 4:9; Ps 51:5). No one is. But that is not an occasion to resent God’s Omniscience, rather it’s something to celebrate as far as being completely known and yet completely loved.

Moses makes mention of this very thing in Psalm 139. He observes how God is completely aware of every nuance of his heart and mind. He revels in the freedom he has before God to be utterly transparent and, at the same time supremely confident that he is accepted by a Holy God.

What’s the difference between Moses and Christopher? The difference is that Christopher superimposes the flaws of humanity upon God’s holiness because the idea of Divine Perfection reside beyond the borders of his definition of what’s reasonable. Hence, God’s ability to know someone completely is processed as surveillance rather than omniscience. And in the same way, he processes omnipotence as arrogance.

He goes on to say that for the better part of 98,000 years God did nothing as man struggled and suffered. The Old Testament makes it obvious that God was very involved in the lives of His people, so to say that He was doing nothing is a gross understatement. Consider the Exodus, the enumerable military campaigns of the Israeli army, the time of the judges, as well as the way in which all of the Major and Minor Prophets describe God as being intimately aware of His people’s condition and completely committed to their welfare.

No doubt, Christopher questions God’s activity with the other people groups that aren’t mentioned in Scripture. What of those that didn’t have access to Christ? What of those who never heard of the Ten Commandments?

In Rev 5:9 that there will be people from every nation throughout history in Heaven. While the Bible doesn’t go into any kind of detail as to how that works, one can rest assured that the Message of God’s grace will have been communicated and his judgement will be fair (Acts 10:34-35; Rom 1:20; Jas 2:25). Click here for more reading on that subject.

V) In the Desert

Christopher’s also critical of God’s decision to announce His Solution to sin to a people “in the desert” who are not nearly as literate or as advanced as the Chinese. At the time of Christ, the Roman Empire was under the authority of Caesar Augustus. Never before had so many human beings acknowledged the authority of a single leader. His subjects formed more than one third of the entire global population.3 When you couple that with Rome’s educational system, which was heavily influenced by the Greeks, along with Rome’s engineering and technology, Hitchens comment is revealed as being less than credible. Rome was very well positioned to serve as a starting point for the gospel message (see Acts 25:12; 28:30).

Hitchens then goes on to say that he regards the Christian message to be immoral. His conclusion is derived from a limited perspective on the consequences of any kind of wrongdoing. While it is both appropriate and biblical to take responsibility for the wrongful act that you’ve committed (Matt 5:23-26), the spiritual ramifications of sin are both eternal and lethal and cannot be offset by any kind of human effort (2 Sam 12:13 [see also http://www.reformation21.org/articles/a-godcentered-understanding-of-sin.php]). In other words, being ethical may address the material debt incurred by your actions and it may even ease the tension felt as a result of your wrongdoing, but it accomplishes nothing as far as paying the debt that is owed to God.

That’s what makes grace so amazing. It’s not a question of the lengths you go to in order to compensate for your actions – that’s an expected response from a moral perspective. But neither you nor I can atone for our sin on our own (Heb 10:4). It requires a Divine Solution. And when you consider the price that God was willing to pay for said solution, to regard it as immoral is nonsensical. Rather, it’s a kind of love that is nothing short of outrageous in that it is entirely undeserved, yet freely given (1 Jn 3:1).

Finally, Hitchens concludes that God has created a no win scenario by imposing expectations that are impossible to live up to. Coupled with the fact that He’s aware of, not only your outward behavior, but also the agendas within the hidden recesses of your mind, you are lost and condemned from the very start.

Paul refers to the same “no win” scenario that Hitchens observes in Romans 7. This is a man that was blameless, as far as keeping the law (Phil 3:6). But however pristine he may have looked on the outside, he knew that before God, all his righteous acts were like filthy rags and he was a slave to sin (Is 64:6; Rom 7:14). And it’s not that God has orchestrated this situation, rather it goes back to the fact that man chose this dynamic back in the Garden of Eden (Gen 2:15-17; 3 :16-19). But while man chose to live in the context of this sitting, God provided a Remedy that Paul builds up to in Romans 7:24-25 where he says, “Wretched man that I am! Who will deliver me from this body of death? Thanks be to God through Jesus Christ our Lord!”

The fundamental flaw in Hitchens’ reasoning is that his philosophical starting point positions himself in the center of the universe as opposed to God. Woodrow Wilson once said, “If you make yourself the center of the universe, all your perspective is skewed. There is only one moral center of the universe, and that is God. If you get into right relation with Him, then you have your right perspective and your right relation and your right size.”4 Hitchens has determined that God cannot exist outside the parameters of his intellectual preferences. His limited knowledge of Scripture coupled with a resolve to process the whole of life and creation according to a personal paradigm that reduces the enormity of the cosmos and the intricacies of the human experience to something that fits within an academic shoebox, results in something that appears controlled and calculated, but is revealed as being pathetically inept when confronted with the world as it truly is.

But here’s the thing: Hitchens isn’t going to be swayed by mere reason alone. For him, this kind of debate is more along the lines of chess where people position their arguments like they would move their bishops and pawns on a chessboard. That isn’t to say that you don’t engage people like Christopher. Paul never shied away from debating the logic of the gospel. You see that in Acts 17 when he was in Athens and engaged the philosophers and the great thinkers in that city. But for people like Christopher, you want to challenge their logic with not only your rebuttal but with your life. It’s there where the Power of God is most compelling. Ideas are one thing, but the ideals that guide and empower the life that is worth imitating – that’s what makes the difference, that’s what silences the critics and that’s what points people to Christ.

Is Homosexuality Sinful? (Part I) He Loves the Sin, but Hates the Sinner...Really?