There is No Referee 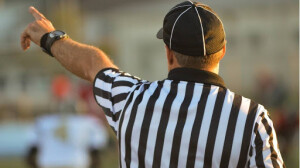 The Liberal disposition towards God is similar to a football player who’s on the field, playing the game, but doesn’t believe in a Referee.

There are no penalties, only plays. The idea is to move the ball down the field and enjoy the fulfillment that comes from putting points on the board. That is not only his goal, it is his right and with that sense of entitlement comes the authority to define the standard by which his conduct on the field is measured.

Should someone challenge his approach, because he’s unwilling to acknowledge the Reality of a “higher authority,” he sees it as a situation where he’s being compelled to adjust his perspective according to only the traditions and preferences of those on the other team and he will look at them and demand to know why he has to play by their rules and refer to them as judgmental and fascists.

There is no Referee.

This is why any conversation pertaining to morality or politics or the cultural in general is destined to fall short of anything influential because until he’s willing to acknowledge the Reality of God, he is his own bottom line. And his philosophical apparatus will interpret anything that comes across as critical of his behavior as not only a negative appraisal of his performance, but an attack on his dominion over all that constitutes the difference between right and wrong.

There is no Referee.

The answer to those four questions define one’s spiritual creed. Whether you answer those questions according to the Christian faith or a humanistic worldview, both are “religious” viewpoints.

Oftentimes the debate that happens between Democrats and Republicans ceases to be about policy as much as it becomes an argument about morality. The moment it becomes a moral issue, it is therefore a spiritual topic in light of what God specifies in Scripture. But if there is no Referee, than the only Standard by which moral conduct is defined and measured is whatever best promotes the humanistic agenda lurking behind the behavior being discussed. And what applies to one team may or may not apply to the other and what may be an infraction today may not even resonate as a headline tomorrow.

On the surface, the argument that defends the idea that there is no Referee can sound compelling in the way it suggests that to assert a Biblical position is to violate the separation of church and state and force a person to adopt a particular religious disposition that may or may not coincide with their personal convictions. But the idea that there is no Referee is a religious disposition in that it establishes man as his own deity. It’s not just a question of what the Liberal doesn’t believe about God as much as it’s what they assert as an acceptable replacement for the Role that God plays in, not only determining the difference between right and wrong, but the origin of the universe, the question of life after death as well as the purpose for one’s existence.

The answer to those four questions define one’s spiritual creed. Whether you answer those questions according to the Christian faith or a humanistic worldview, both are “religious” viewpoints. And to strip our nation of it’s Christian foundation by insisting that any reference to a religious framework is to violate the separation of church and state is revealed as a sinister absurdity once it becomes apparent that the atheist’s perspective on the human experience is just as much of a “religion” as much as Christianity and in that regard they are the very thing they claim to despise.

Yet, hypocrisy is only recognized as such when there’s a concrete Truth in place to flag when a person is being hypocritical.

But that’s not something that concerns a Liberal because…

…there is no Referee.