The Liberal and the First Amendment 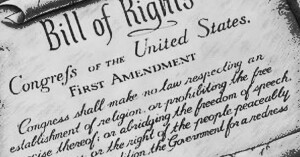 Eliminate the stained glass windows and the sacred texts and “religion,” from a purely philosophical perspective, is how you answer four basic questions:

However you answer those questions, whether it be from an atheist standpoint of the Christian faith, that is your “religion.”

Despite the fact that most Americans believe in God, Liberals are constantly asserting the idea that public prayer or the display any kind of Christian icon in the marketplace is a violation of the separation of church and state.

But when you take into consideration that the Liberal is just as “religious” as the faith based community they oppose, the true nature of their platform is revealed. They’re not looking to promote the “freedom of religion” or an environment where there can be no public expression of any one creed. Rather, they’re looking to establish their religion as the singular faith that is allowed in the public square.

Ponder that the next time you hear a Liberal complain about the “separation of church and state.” While they pretend to be the champions of the First Amendment, they are the thieves that rob the country of it’s most profound heritage – the Christian foundation upon which we are based – by establishing itself as the only religious conviction that can be practiced in public. In that way they violate the very thing they claim to protect and their hypocrisy is as sinister as it is nonsensical.

It's What You Do Believe There is No Referee