Read Me Your Rights

Many of the issues that dominate our nation’s headlines are defended by insisting that an individual’s “right” is being violated if someone disagrees with their perspective.

Pride events are about human rights; they empower LGBTI individuals to reclaim the rights and freedoms they are denied, and the public space they are often excluded from.1

…more than a year into the Biden-Harris administration, we remain disappointed by a lack of urgency on dismantling inhumane immigration policies and practices, reforming the criminal-legal system, and ensuring that civil rights are front and center in the nation’s technology and AI policies.2

Reproductive rights—having the ability to decide whether and when to have children—are important to women’s socioeconomic well-being and overall health.3

For a homosexual, the “right” to be gay means that any school of thought that denounces Homosexuality as being morally wrong is to be legally processed as a form of discrimination. The Civil Rights movement dismisses any questions pertaining to illegal immigration – statistics that point to the disproportionate number of violent crimes committed by black people and the number of black minorities that drop out of High School – as being a front for Racism as opposed to an honest evaluation of all the factors that need to be considered before insisting that America is dominated by a bigoted populace.

In all three instances, the validity of their platform is founded on an entitlement that is absolute and therefore any person who questions or attempts to refute their argument cannot do so without being immediately characterized as cruel and unjust.

Yet in order for a “right” to qualify as a transcendent given, you have to first consider how a right is defined and what it is that gives a right the ability to subordinate all preferences and opinions to its substance and truth.

II) The Declaration of Independence

Among the things that makes the Declaration of Independence such a powerful document is the premise it was built upon. The Declaration of Independence is more than a list of grievances. It is a statement that identifies the monarchy of King George as being fundamentally flawed, not because of his tyrannical approach to the colonies, but because of the way his rule violated Divine Absolutes.

That is why it reverberated the way it did around the civilized world. Our Founders recognized both the strength and the necessity of building a government on the Substance of Scripture if that government was to succeed in providing the legal environment where an individual’s God-given rights could flourish.

We hold these truths to be self-evident, that all men are created equal, that they are endowed by their Creator with certain unalienable Rights, that among these are Life, Liberty and the pursuit of Happiness.4

It was both the advantages of a biblically based government and the way in which they rightly identified the King of Great Britain as ruling in a way that was contrary to the way in which Scripture defined a human being, that positioned our nation has having a legitimate cause and not just a mere complaint.

It’s also here where we see what a “right” is and why its legal efficacy is so profound.

III) What is a Right?

A “right” is something that has as its Source God Himself. Anything less is nothing more than a consensus arrived at by a human collective. And if the composition of the right in question is nothing more than a collaboration of like-minded people, it will ultimately fail to be reliable because if a human dynamic can give it to you, that same human dynamic can take it away, which means that it wasn’t a “right” to begin with as much as it was a temporary accommodation.

That’s not to say that a godless individual is incapable of recognizing and championing a fair and compassionate system of rules and laws. The problem is not in the substance, but in its Source.

In addition to the inconsistent dynamic of a humanistic approach to morality and government due to its dependence on a consensus rather than an Absolute, the other problem is that by establishing the individual as his own bottom line, he can’t insist on his own autonomy without extending that same dynamic to everyone else.

In other words, if he’s going to live by a mantra that says, “Everyone is entitled to their opinion” when it comes to issues of morality and the value of a human being, then they cannot logically declare that someone who differs in their viewpoint is “wrong.”

By saying that “You do you…” you’re implying that everyone can be right at the same time in the way they approach themselves and the world around them.

If that is the case, then there is no such thing as “intolerance” because, according to the idea that a person can choose however they want to perceive a particular behavior, then there is no right or wrong, it’s all a matter of preference.

So, any attempt to defend your perspective by labeling a person a person who disagrees with you as being “legalistic” or “intolerant” proves to be a pointless argument because of the way its philosophical foundation declares every viewpoint as being on the same moral plane.

Basically, you’re entitled to your opinion until you don’t agree. And then you’re labeled “hateful” and “intolerant” (see graphic below). 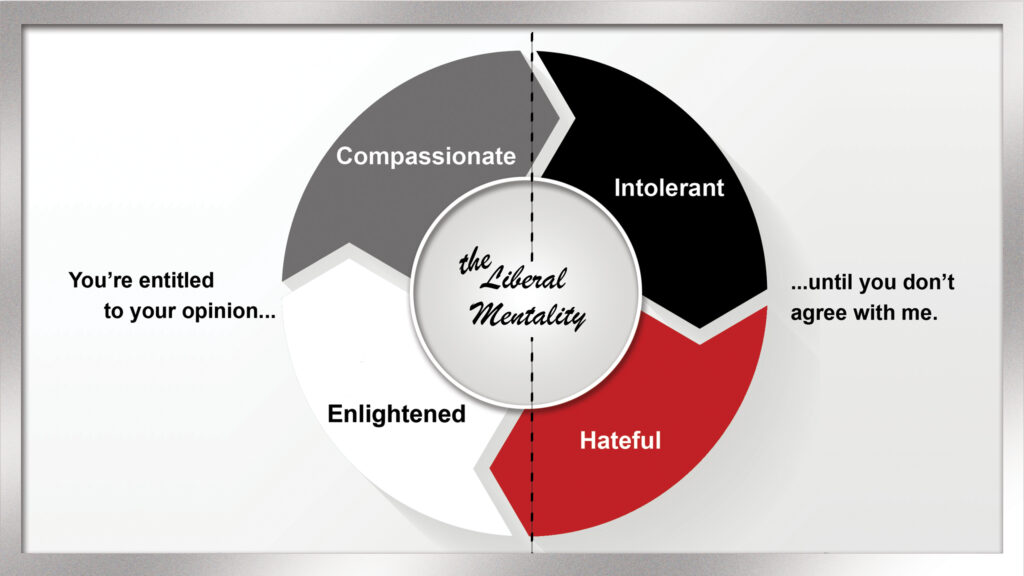 Yet how can this be if everyone’s viewpoint is valid?

This is why the court system is so utterly crucial in the mind of a Liberal. It’s the closest thing to being able to establish their preferences as principles without having to concede the one side aspect of their argument. But once the ruling of the court changes, the true nature of their philosophical paradigm is revealed as being an unsustainable and nonsensical preoccupation with one’s self as the ultimate bottom line.

Os Guiness was born in China during WWII. He moved with his family to England and completed his undergraduate work at the University of London and completed his doctorate at Oriel College, Oxford. A sought after speaker and a prolific author, he sums up America’s political status apart from it being founded on a Divine Absolute in his book, “Last Call for Liberty“:

The framers also held that, though the Constitution’s barriers against the abuse of power are indispensable, they were only “parchment barriers” and therefore could never be more than part of the answer. And in some ways they were the secondary part at that. The U.S. Constitution was never meant to be the sole bulwark of freedom, let alone a self perpetuating machine that would go by itself. The American founders were not, in Joseph de Maistre’s words, “poor men who imagine that nations can be constituted with ink.”  Without strong ethics to support them, the best laws and the strongest institutions would only be ropes of sand.5

He makes a strong argument for the way in which the “pursuit of happiness” unchecked by the responsibility one has to be moral translates to disaster. And while it’s not always obvious, as far as the true essence of why our political climate continues to deteriorate into violent protests and little regard for the rule of law, it is nevertheless the foundational curse upon which their rhetoric is based.

Guiness is completely on point in what he says, as far the way in which a humanistic approach to morality and the world in general has no sure foundation. Even the idea of focusing on “what’s best for the community” ceases to be a legitimate restraint because, in the absence of an ideal that is not subject to interpretation, even what’s most beneficial becomes purely subjective.

Anytime you hear someone attempt to defend a behavior or viewpoint that’s contrary to Scripture by invoking the idea that it is their “right” to do so, you can easily refute their rationale and defeat their argument by simply asking who gave them that right?

Inevitably, they will have to concede that their right comes from the Constitution. Yet, as was recently seen in the way the verdict of Roe vs Wade was overturned, their “right” wasn’t a right after all as much as it was “a coupon” – an agreement made between the manufacturer and the customer that a certain provision could be assumed to be in place. But if the manufacturer decides that coupon is no longer valid, it becomes both obvious and incriminating in that what you claim to be a “right” is a favor defined exclusively according to the dictates of a higher, human authority.

It’s not a right.

And the idea that everything can be regulated to an open forum – that there are no Moral Absolutes and the individual is his own deity – is a sinister mechanism used to conceal a self-absorbed perspective that is ultimately revealed to be both hypocritical and nonsensical.

A right is something created by God to guard your way, not a weapon you can use to get your way.

As believers we want to be the greatest commercial for all that Christ brings to the table, as far as the Purpose, Peace and Power that is available through a relationship with Him and how that translates to the kind of life that’s worth living.

We also want to be in spot where we can not just “defend” what we believe in the context of fielding criticisms and attacks, but also in being able to identify and defeat the assumptions that serve as the basis for the arguments used by those who are antagonistic to the idea of having to answer to anyone other than themselves.

If you’d like to teach this content as a lesson in a Small Group context, you can buy both the outline and the Listening Sheet for $5.00 at brucegust.com
The Central Truth | Part I A Biblical Approach to Politics | Part IV