The China Study | Part I 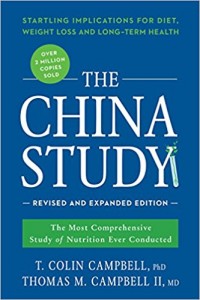 I’m reading a book at the behest of my doctor who’s got me on a plant based diet in order to get my cholesterol levels down which tend run a little high because of my genetics.

The book is “The China Study” by T. Collin Campbell, PhD. It’s named after one of the largest and most comprehensive studies that has ever been done to investigate the connection between diet and disease. The New York Times called it the “Grand Prix of Epidemiology.”

Part of what makes Dr Campbell’s findings so significant is that he grew up on a farm where beef, poultry and eggs were assumed to be healthy and the best source of protein. His earliest research projects were designed to expedite the growth of cows and sheep so they could packaged for market that much quicker which fell right in line with the way he grew up.1

But then he began coordinating a research project that sought to identify the toxin that was apparently common in the diet of Filipino children that was causing a high prevalence of liver cancer. Initially, the study sought to undergird the efforts to ensure that these children, which were frequently malnourished, be given an adequate amount of protein. It was then he discovered an incontrovertible fact that those who consumed a high protein diet were more likely to contract liver cancer.2

This countered everything he had ever learned, but the data was undeniable. He began his own research project that was later funded by the National Institute of Health, the American Cancer Society and the American Institute for Cancer Research. 27 years’ worth of research revealed the same thing: In laboratory rats, dietary protein proved to be so powerful in its effect that they could turn on and turn off cancer growth simply by changing the level consumed.3

But that’s not all. We found that not all proteins had this effect. What protein consistently and strongly promoted cancer? Casein, which makes up 87% of cow’s milk protein, promoted all stages of the cancer process. What type of protein did not promote cancer, even at high levels of intake? The safe proteins were from plants, including wheat and soy. As this picture came in to view, it began to challenge and then to shatter some of my most cherished assumptions. 4

It’s one thing when you’re reading some subjective commentary from someone that was able to triumph over a chronic disease using an unconventional method. It’s quite another when you’re reading the findings of a group of accomplished scientists who are having to abandon their most cherished beliefs in light of the truths that the data reveals.

I am convinced that there is an untapped resource represented by a healthy diet. And by “healthy,” I mean a diet that focuses on plant based foods.

Feel free to click on the links that I’ve got referenced to learn more but be aware that this isn’t something new. Hippocrates said, “Let food by thy medicine and medicine by thy food.” It’s as fascinating as it is credible and in the end, it’s not just about trying to beat a disease, it’s about being healthy in general.

Flaming Arrows of Death Unity at the Expense of Truth?