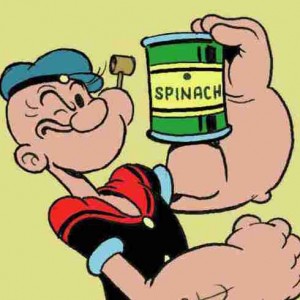 You may have heard the terms “Essential” vs “Non-Essential.”

They refer to the ability of your body to manufacture its own nutrients as opposed to those nutrients that have to be obtained through a healthy diet.

For example, Vitamin D is a result of a process your body uses to synthesize sunlight. You don’t eat it like you would a vegetable, so, in that way, it’s considered “non-essential.” Protein (amino acids) can also be broken down into that which your body can make on its own as well as those that have to be consumed. And it’s those nutrients that have to be consumed that comprise the “essential” category of vitamins, minerals and amino acids. For a complete list of “non-essential” and “essential” nutrients, click here.

One thing that’s worth underlining, however, is the fact that while your body can produce certain nutrients on its own, it can only do that if properly nourished and here’s where we get into the idea of “Vitamins vs. Popeye.”

“Popeye, the sailor man” was a hugely popular animated figure that would often find himself in a spot that required a superhuman boost in energy and strength in order to defeat the bad guy and save Olive Oyl, his forever sweetheart. In order to secure this boost, he would pop open a can of spinach.

On the surface, it’s easy to gloss over this cartoon as entertainment and miss the message this is consistent with all that you want to be considering when it comes to being fit.

It’s not that Spinach makes you incredibly strong. You’ll see articles that criticize the affect that Popeye had on Spinach sales as kids rushed to their local grocery store with their moms in search of the magical vegetable that would make them bigger than life.

While red meat does contain more iron than spinach, the fact of the matter is red meat contains far more fat than spinach. A plant based diet, whether you’re looking for protein (which does build protein) or the vitamins and minerals that fall under the heading of “essential vitamins,” is far superior to anything that comes from an animal because of the fat and other chemical entities that tend to get “stuck” in your arteries.

Beyond that is the idea that, even if you’re not quickly downing a can of spinach, the notion that you can pop a pill or swallow a powder to provide your body with what it needs without having to concern yourself with an intelligent dietary regimen is pure folly.

That may come as a surprise, given the prolific amount of marketing that has gone into promoting everything from protein powder to vitamin supplements. The problem comes with the way your body processes food as opposed to the way it processes a “pill.” Here’s the bottom line:

Because nutrition operates as an infinitely complex biochemical system involving thousands of chemicals and thousands of effects on your health, it makes little nor no sense that isolated nutrients taken as supplements can substitute for whole foods. Supplements will not lead to long-lasting health and may cause unforeseen side effects. Furthermore, for those relying on supplements, beneficial and sustained diet change is postponed. The dangers of a Western diet cannot be overcome by consuming nutrient pills.1

Supplements became popular in the mid 1980’s. Since then it has become a 32 billion dollar industry. It got a huge boost as a result of two pieces of legislation: The 1976 Proxmire Amendment that allowed supplements to be sold without a prescription and the 1994 dietary Supplement Health and Education Act which established standards for supplements in general.  In between those two legal measures was a scientific study in 1982 where some of its scientific contributors emphasized the increased consumption of vitamins and minerals, but in the context of a whole foods. It was stated implicitly that their recommendations was not to be interpreted as an endorsement of isolated dietary supplements. Industrial pundits pushed back aggressively and, in spite of a decision made by the U.S. Federal Trade Commission that the vitamin supplement companies where making health claims that were deemed inappropriate, the “industry” won the day which resulted in what some regard as the “biggest health hoaxes of all time: the nutrient supplement industry.2”

So, while Popeye may have been exaggerating things by promoting the idea that spinach was going to make you strong, he was absolutely on point as far as saying that it’s going to be a plant based diet that’s going to make you fit and healthy as opposed a habit of swallowing pills and consuming powders believing that can substitute for a good diet or effectively compensate for a bad one.

And there you have it!

“I fight to the finish, cause I eat my spinach, I’m Popeye the sailor man…”

Do Intelligent People Tend to Not Believe in God? Why?