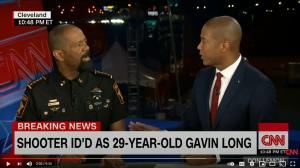 I was watching an interview between Don Lemon and Sheriff David Clarke back in 2016. They were talking about the recent events in Baton Rouge where three police officers were killed and three others were wounded. The first question Lemon asked the Sheriff was, “…we spoke to the heads of the Police Department and the Sheriff’s Department and the State Police down there and they told us how their hearts are reeling – their message is peace and coming together as a country. What’s your message?”

At this point Clarke looked at Lemon with a look of disgust – which is understandable given the fact that regardless of how he might choose to answer Lemon’s question, it would sound like he was wanting something other than “peace.”

What do you say in response to a question like that?

“That’s my message, Don. Truth. Peace in the absence of truth is nothing more than unopposed violence and that’s what you’ve got going on in Baton Rouge.”

And then go from there.

Regardless of the news outlet or the commentator, no matter how noble the “message” may sound, in the absence of truth it’s nothing more than evil dressed up as a pretty lie.

Apart from first hand knowledge, everything you and I know about the world is based on what we’ve been told. Provided the source is credible, our convictions are sound. If, however, that source is intentionally incomplete, yet insists that it’s telling the “truth,” at that point we’re not being convinced as much as we’re being conditioned.

Before we rush to condemn or defend a particular personality or premise, the first question we need to ask is “Is it true?” And we can’t allow ourselves to be influenced by the presentation as much as we need to focus on the substance of the answer.

It can become subjective and our philosophical preferences will influence our willingness to accept one testimony over the other. But that doesn’t change the fact that there is a bottom line and objective tests can be applied in order to know with at least some degree of certainty the difference between truth and fiction, regardless of what we want to be the case.

So, when you hear someone talk about “change,” or accuse someone of wrongdoing, regardless of how justified their disposition may appear or how passionate the witness may sound, before any action is taken or any conclusion is drawn, the first question that needs to be asked is, “Is it true?”

However well intended your convictions may be, if you’re basing your approach on an incomplete truth or a flat out lie, it’s like going the speed limit but headed in the wrong direction.

Regardless of what they say, no matter how they sound or how things appear…

You Have to Talk to Thomas Three Questions