Are We Being Protected or Controlled? 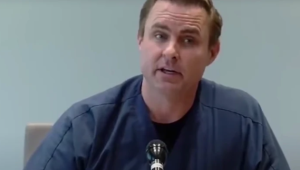 President Trump responded by sending a Navy ship called, “Comfort” to help with the overflow – non-Covid19 patients. That ship has 1,000 beds and the most they had on that ship was…

Right now, the virus has claimed the lives of 61,000 people.

How many of those people died because of Acute Respiratory Distress Syndrome? That is how a person dies if the cause of death is the Coronavirus, or the Flu or Pneumonia. the lungs fill up with fluid and the person can’t breathe. There are rumors out there that say the mortality rate is being inflated for the sake of profit and intimidation.

There are people who are dying as a result of pre-existing medial conditions. But because they were also contending with the Coronavirus at the time of their passing, their death is reported as Coronavirus mortality.

Every time you hear about a new “outbreak,” bear in mind that there’s a 98% chance of recovery. So, the question isn’t “How many people are infected?” The question is, “How many will require hospitalization?”

Bu that isn’t the way things are being presented. And if you go off script, you’re demonized as an uncaring fiend.

But then, that’s the way a lot of conservative positions are handled.

Two doctors from California recently held a press conference and enumerated some of the statistics that are publicly available in terms of how the mortality rate of the COVID-19 is less than that of influenza. They elaborated on the harm that’s done by isolating yourself because in doing so you’re diminishing your body’s ability to build up necessary immunities.

It was a solid, common sense and well documented presentation that had the backing and support of multiple medical professionals.

Now, I don’t care what side of the aisle you’re on. There is another side to this Coronavirus anomaly that is not only being brushed aside, it’s being silenced.

That is not “protection,” that is “control.”

The numbers no longer justify fear or panic. In addition, there is irrevocable harm being done to our country, not only in the destruction of a citizen’s ability to provide for themselves, but also in the context of increased abuses and suicides.

The fact that anything that deviates from statistics and perspectives that foster fear, masks, panic and gloves is being shut down is not only a violation of the right to free speech, it’s a nonsensical dismissal of the fact that this virus is not as lethal as other diseases that we accept as a part of our daily lives.

There is more to this than what’s being reported and today, by virtue of the way in which youtube removed a video espousing a valid collection of concerns and questions, the sinister elements who are exploiting this crisis showed their hand….

Are we being protected…

…or are we being controlled?