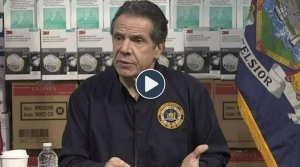 Trading the elderly for the economy…

Does he have a point?

We’re not trading the elderly for the economy. Rather, we’re trading fear for wisdom.

Before we attempt to pop the hood on the Governor’s accusation, let the record show that

A party requires more than hatred for an individual. A party has to stand for something that transcends the immediate or the visceral. Yet, in the age of Trump, the public is not interested in nuance or niceties. The watchword is “resist” and that means to push back at all costs, even against our core values. So the question is not what the Democratic Party will do but what it will be after Donald Trump eventually leaves office. (The Hill)

Alexander Hamilton and Salmon P. Chase adorn the face of our ten dollar bill and our ten thousand dollar bill respectively. While their individual accomplishments were substantial, the honor of appearing on our currency is a result of their performance as Secretary of the Treasury. Both Hamilton and Chase kept our nation moving forward financially despite war time scenarios that threatened to destroy our country. Reason being is that unless you have the monetary wherewithal to support your legislative ideal , a country is nothing more than an idea as opposed to an infrastructure that provides the means by which people can live, work and function.

In other words, it’s not about wealth as much as it’s about sustenance. And the crisis we’r’e facing is not just about a virus, it’s about maintaining the health of our country’s operational status and our citizens livelihood.

Cuomo’s statement is heinous. It’s an obvious distortion of the decisions that need to be made in order to vilify his opponents and it represents an intentional dismissal of the fact that unemployment claims in his state were up by 425,000 compared to this time last year. He is facing an economic crisis himself, given the number of people who have been laid off and it will get worse the longer businesses are forced to keep their doors closed.

The thing is, it’s not about Trump.

It’s about wisdom and gauging truth according to a comprehensive evaluation of all the facts rather than the manipulation of only some of the facts. Those that seek to politicize this event reveal themselves the moment they’re required to live according to the standards they set for others including limited income, questionable future and a dramatic disruption of their lives on every level. Those that are irrationally fearful need to answer for why they’re hesitant about a virus that doesn’t even compare to the number of people that die as a result of the regular flu. Bear in mind too that the models are constantly being adjusted in light of the fact that as much as 50% of the American population may have already been infected with the disease which means its mortality rate is far lower than what has been publicized.

And those that want to insist that the elderly are being forfeited in the name of profit have to prove that’s about maturity and not pre-existing health conditions. And if they want to insist that our nation’s economy doesn’t matter, have them produce a spreadsheet that shows their ability to remain solvent, sheltered and fed for the next several months without any income.

The only way we’re going to solve the crisis we’re in is to recognize that it’s more than just a health concern. Our entire infrastructure is at risk and for that reason we can’t afford to listen to bogus accusations or self absorbed fiends that thrill at the prospect of underscoring statistics rather than highlighting solutions.

That’s not what real Americans do.

We pray, we come together, we endure and we overcome…

…and if there’s any substitutions to be made…

We trade fear for wisdom.

Are We Being Protected or Controlled? It Starts Tonight