What Would Your Billboard Say? (Part II) 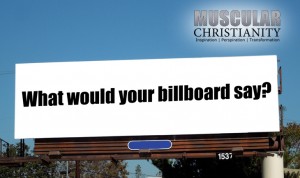 Last time we talked about “Billboard Christianity,” we talked about one possible tag line being “It’s All Good” meaning that, as a believer, you have access to a perpetual Source of optimism because you

This week we’re looking at another tag line. This one is “Pray Big.”

Above you see a license plate that belongs to a friend of mine.

“Pray Big” is consistent with the message communicated in several Scriptures.

A) He Knows You (better than you know yourself)

No one knows you like God knows you (see 1 Sam16:7;  Jer 17:10; Matt 10:30). He had a plan in mind for you before you ever entered this world (Ps 139:16). That plan is tailored expressly for you (Eph 2:10). Because He wired you in a way that results in your having both the ability and a passion for doing what He created you to do, rest assured that the greatest amount of fulfillment you’re ever going to experience in your life is doing the things you were created to do.

That being the case, anytime you’re intentional about seeking God’s direction, you’re doing yourself a favor because He’s going to steer you in the direction that results in the greatest good for your life. 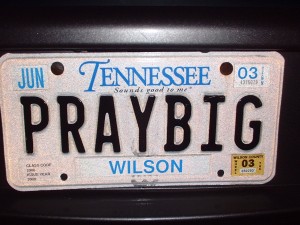 If you could ask God for anything, what would it be? Do you think you would get it? Why or why not?

Take a look at what God told David in the aftermath of his affair with Bathsheba. At this point, David’s busted. He’s getting chewed out by God through the prophet Nathan and he deserves it. He committed adultery and then he turned around and used his authority as king to orchestrate the death of one of his bodyguards in order to cover his tracks. He knows what he has coming and he’s not putting up any kind of argument.

In the midst of God’s rebuke, the Lord says something that’s significant. Take a look:

I gave your master’s house to you, and your master’s wives into your arms. I gave you the house of Israel and Judah. And if all this had been too little, I would have given you even more. (2 Sam 12:8)

God’s listing every beautiful woman that David had access to along with the throne. And then He says if that hadn’t been enough, He would’ve given David even more. Think about what God is saying, here. David had noticed a woman that was not his to pursue. The fact that he had a desire for female companionship was not the deal-breaker. Rather, it was the object of his desire and the way in which he went about pursuing that which was forbidden by violating two commands that carried the death penalty.

Look at what it says in Luke:

If you then, though you are evil, know how to give good gifts to your children, how much more will your Father in heaven give the Holy Spirit to those who ask him!” (Luke 11:13)

…and then in James:

God is not stingy. When you ask, He hears and He stands ready to answer your prayer.

Consider this: Anything you ask for is going to pale in comparison to what He already gave in terms of the sacrifice of His Son:

He who did not spare his own Son, but gave him up for us all – how will he not also, along with him, graciously give us all things? (Rom 8:32)

So, with that in mind, ask! Go for the brass ring. Pray big!

Now to him who is able to do immeasurably more than all we ask or imagine, according to his power that is at work within us, to him be glory in the church and in Christ Jesus throughout all generations, for ever and ever! Amen. (Eph 3:20-21)

You can’t out-imagine God. Pray for big things and do so confidently knowing that He hears and He’s more than willing to answer.

Now, He doesn’t always answer the way we like and this is where the worship component of all this needs to kick in.

Go back to that passage in Luke:

Fact is, sometimes we ask for the equivalent to a snake or a scorpion. We don’t see it that way, but God can see things that we can’t so He says “No.”

Other times we might be asking for something that is absolutely noble and God either says “No” or “Wait.” Either response can be exasperating but only if you neglect to keep the first part of the Lord’s Prayer center stage in your approach.

The word “hallowed” means to “establish as holy.” In other words, before you launch into your petition, you begin by honoring God as being holy. In other words, you start by reminding yourself of Who it is you’re talking to.

God is not your personal vending machine. He’s not your gofer. And should He respond to your prayer by saying either “No” or “Wait” – processing that response from a position that acknowledges God for Who He is far easier than if you try to do that while maintaining God as subordinate to your authority. That’s when you can become indignant and worse.

It is not so much true that “prayer changes things” as that prayer changes me and I change things. God has so constituted things that prayer on the basis of Redemption alters the way in which a man looks at things. Prayer is not a question of altering things externally, but of working wonder in a man’s disposition. (“My Utmost for His Highest” by Oswald Chambers, August 28th reading)

God often works miracles through very common means. He uses people to accomplish His agenda and it’s not uncommon for an answer to your prayer to be delivered via something seemingly natural (see Luke 17:14). But because it’s God Who did it, it is therefore supernatural and you want to be able to appreciate it as such.

When you pray and you do so reverently, you change. God sweeps up the distractive dust balls that are scattered on your spiritual floor and you’re given a chance to see things from a different perspective. That is the true miracle of prayer. Sure, the material answer to your request is important, but it’s the change that He exacts in you that is truly amazing.

So pray big! Consider Who You’re talking to:

His answer is assured and whatever that answer is, in terms of the material result you’re requesting, rest assured that His answer is exactly what it needs to be in order for your welfare to be accomplished. And in the interim, you have been changed because your perspective is being aligned with the Greatness and the Goodness of God which produces a more optimistic and a healthier disposition.

Believe and trust (Jas 1:5-8). Move forward knowing that God is aware, able and active as far as your request is concerned. Don’t settle for an existence that’s limited to the physical possibilities as dictated by a cynical, human mindset. Pray big and know that God is exactly Who He claims to be, no request is too big and no appeal goes unanswered.

For some final thoughts about your, “billboard,” click here…

Before There Was Insurance... It's Ain't Just Heaven