Reparations and Being Sorry for Being White 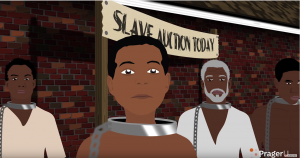 In addition to the quality content represented by the Prager U video that you can access by clicking on the image to the right, I wanted to add yet another point to the conversation pertaining to reparations and apologizing for being white.

Here it is: The Civil War was fought over how we as a nation were resolved to define a human being. Granted, Lincoln’s initial concern was the preservation of the Union. But the Emancipation Proclamation was the legislative manifestation of Lincoln’s belief that the only Union worth preserving was a Union that was devoid of slavery. And if you consider the debates he had with Stephen Douglas leading up to his nomination, he references race specifically. It wasn’t just the Slave Trade, according to Lincoln, it was the enslavement of a specifc race justified by the nonsensical belief that ethnicity defined one’s humanity.

That’s what the Civil War was about.

To be ashamed of being caucasian is to ignore the fact that Lincoln was white as were the over 300,000 white soldiers who died to make his point.

I am not ashamed of being white because I do not evaluate my ethnicity by the mindset of the Antebellum South any more than I would expect a black man to guage his worth according to the atrocities committed by Idi Amin.

Race is not what defines you, it is your individual character that matters. The ranks of caucasians include several sinister characters, but they also include Abraham Lincoln and Billy Graham. The African American demographic includes a number of flawed individuals but it also includes Fredrick Douglas and George Washington Carver.

To be ashamed of your race is to adopt a cowardly perspective on yourself and the world around you because it means that you’re dismissing an individual’s responsibility to be moral and instead blaming it on the pigmentation of one’s skin.

And what’s ironic is that these people who are apologizing for being white are being just as racist as their Jim Crow counterparts in that they’re focusing on race rather than responsibility.

And it needs to stop…

Watch How the Media Reports on Turkey and Syria Why Did God Create Man?