Watch How the Media Reports on Turkey and Syria 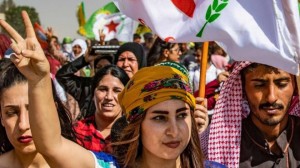 This morning the Wall Street Journal had this as a headline:

Turkey agreed to suspend military operations in northern Syria for five days in return for a U.S. pledge to facilitate a pullout by Syiran Kurdish fighters, a deal President Trump hailed as an “an amazing outcome,” but that some critics said mainly fulfilled Turkish goals.”

Since 2002 Syria has been in the military cross hairs of the United States because of their support of terrorism. There are elements within Syria, however, that are opposed to terrorism and want a democracy that respects human rights and religious freedom. These are the Kurds. They represent between 7% and 10% of the Syrian population and have established a self-governing region in northeastern Syria. They are perpetually compelled to engage in military operations, however, in order to fight the Turks from the north and the militant Muslims to the west.

The Turks rule the Kurds within their borders with an iron fist. They’re so intimidated by their Kurdish population that they’ve decided that their Kurdish neighbors in Syria represent an extension of the threat they feel in their own homeland, especially given the way the Syrian Kurdish Militia (called the People’s Protection Unites [YPG]) has been so successful in defeating the Islamic State (IS) within Syria with the aid of US-led multinational air strikes. They see the YPG as being sympathetic to those they define as Kurdish rebels within their own country.

President Trump worked with Turkey’s President Recap Tayyip Erdogan to create a “safe zone” in north eastern Syria. It would be a 20-30 mile area that would separate the border between north eastern Syria and Turkey. The Kurds complied and dismantled all of their military defenses in that area.

Once the US withdrew its support however, Turkey began carrying out military operations in the agreed upon safe zone. In their defense, there are members of the cancerous Islamic State who have infiltrated the Syrian fighters and it is a mess. But it’s because of America’s withdrawal from the area that Turkey was emboldened to initiate military attacks and it’s for this reason that President Trump has been criticized despite his having promised that he would bring our troops home who have been serving and dying in this area for several years.

Yesterday, President Trump returned from Turkey having met with President Erdogan and gotten him to agree to a five day cease fire. During that cease fire, the Kurds are going to move out of the “safe zone” and Turkey will put a halt to any and all military activity in that area. This was done following Trump’s having threatened Turkey with substantial sanctions that would’ve been difficult to endure.

The resulting cease fire is significant. And what makes it significant is that Trump is keeping his promise to withdraw our troops AND maintain a force for good in the region.

But that’s not how the press is presenting it. Had any other Democratic figure been this successful in negotiating with Turkey and the Kurds in Syria, they would’ve been hailed as a brilliant statesman.

Some want to insist that America should remain in Syria and continue spending money lives in the context of a struggle that is rooted in religious and political unrest that has been in place for centuries. Others recognize the futility represented in involving one’s self in an argument that isn’t solved by the logic of democracy or the force of weaponry. Perhaps Proverbs 26:17 should be considered in the midst of all this…?

What Trump was able to accomplish represents the best approach in that it facilitates peace through the strength of sanctions that can be deployed from a laptop and the power of negotiations that can be delivered from a conference table. Mind you, neither one of those two things are effective unless they’re coming from someone what has the will and wherewith all to fight…

But that’s not how the media will present it and it’s that refusal to give Trump any credit that reveals them as the biased and sinister force that they are.

For further reading: The BBC has an excellent article that expounds on the history and the details surrounding the Kurds in Syria, Turkey and US involvement which you can access by clicking here.

I Want Hillary as President (said the Kremlin)! Reparations and Being Sorry for Being White