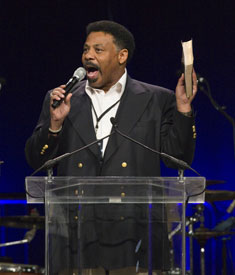 I saw a thread celebrating the decision of the Supreme Court that moved the debate pertaining to same-sex marriage a little farther down the road as far as legalizing it.

Some think this is a good thing, but there are a couple of red flags that need to be acknowledged.

First of all, it’s not a civil right, it’s a choice. To label it as anything else is not to articulate a fact, rather it’s to deploy a tactic. You’re attempting to veil a voluntary decision as something that’s as inevitable as a your own birth and that’s not correct (http://www.urbanfaith.com/2012/05/tony-evans-gay-marriage-is-not-a-civil-rights-issue.html/).

In addition, it may be legal, but that doesn’t make it right. If you want same sex marriage to qualify as “Holy Matrimony,” you have to have more than two consenting adults. You have to have the endorsement of the One Who defined “Holy Matrimony” to begin with, and that’s not subject to a judge’s opinion. Moreover, a person’s “right to be happy” is subordinate to their responsibility to be moral. Otherwise the end result is less than positive, let alone beneficial to the common good. This not progress, this is decay and to acknowledge it as anything else is to turn a deaf ear to the Absolutes that apply.

I was talking with a friend of mine who had some reservations when it came to engaging in the same sex marriage debate simply because the issue is ultimately a symptom of a world view and that’s not going to be altered in the context of a single conversation. I agree. Arguing is rarely cited as something that produces a positive change.

But remaining silent isn’t healthy either. Especially when the stakes go beyond a mere legal provision for a controversial practice. It represents a willingness to put more distance between what is morally right and what is culturally acceptable.

So where does that leave people like me who hesitate saying anything for fear that it will do nothing more than stir the pot and create greater division?

I’m thinking the best response is to be that much more intentional about loving my bride in a way that makes “Holy Matrimony” appear to be the preferred option, as opposed to “same sex marriage.”

Scripture doesn’t put up guard rails to prevent people for going off the road because the ditch provides more fun and fulfillment. But if staying on the road doesn’t look like anything other than a collection of failed attempts and emotional train wrecks, then why wouldn’t the ditch look a little interesting?

Perhaps if there were more perceived advantages to the heterosexual approach, people who are inclined to the homosexual lifestyle would be more open to “traditional” values and the Biblical Absolutes upon which they are based.

That may be a back door to a topic that deserves a more aggressive approach. It’s wrong, no doubt. But even Christ Himself “sold” His message with elements that were legitimately appealing.

Bottom line: Mark me down as being disappointed by the Supreme Court’s ruling and that much more resolved to champion Scripture in the context of a life that looks rewarding as opposed to an existence that looks restricted.

Lap of Gratitude My Imaginary Conversation with Oprah