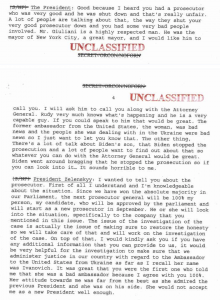 In May 2016, Joe Biden, as Barack Obama’s designated point man on Ukraine, flew to Kiev to inform President Petro Poroshenko that a billion-dollar U.S. loan guarantee had been approved to enable Kiev to continue to service its mammoth debt.

But, said Biden, the aid was conditional. There was a quid pro quo.

If Poroshenko’s regime did not fire its chief prosecutor in six hours, Biden would fly home and Ukraine would get no loan guarantee. Ukraine capitulated instantly, said Joe, reveling in his pro-consul role.

Yet, left out of Biden’s drama about how he dropped the hammer on a corrupt Ukrainian prosecutor was this detail.

The prosecutor had been investigating Burisma Holdings, the biggest gas company in Ukraine. And right after the U.S.-backed coup that ousted the pro-Russian government in Kiev, and after Joe Biden had been given the lead on foreign aid for Ukraine, Burisma had installed on its board, at $50,000 a month, Hunter Biden, the son of the vice president (townhall.com).

Fast forward now to a recent conversation between President Trump and Ukraine’s newly elected President, Volodymyr Zelensky (you can read the entire transcript by clicking here):

President Trump: Good because I heard you had a prosecutor who was very good and he was hut down and that’s really unfair. A lot of people are talking about that, the way they shut your very good prosecutor down and you had some very bad people involved. Mr Giuliani is a highly respected man. He was the mayor of New York City, a great mayor, and I would like him to call you. I will ask him to call you along with the Attorney General. Rudy very much knows what’s happening and he is a very capable guy. If you could speak to him that would be great. The former ambassador from the United States, the woman, was bad news and the people she was dealing with in the Ukraine were bad news so I just want to let you know that. The other thing: There’s a lot of talk about Biden’s son, that Biden stopped the prosecution and a lot of people want to find out about that so whatever you can do with Attorney General would be great. Biden went around bragging the he stopped the prosecution so if you can look into it…It sounds horrible to me.

President Zelensk: I wanted to tell you about the prosecutor. First of all I understand and I’m knowledgeable about the situation. Since we have won the absolute majority in our Parliament, the next prosecutor general will be 100% my person, my candidate, who will be approved by the parliament and will start as a new prosecutor in September. He or she will look into the situation, specifically to the company that you mentioned in this issue. The issue of the investigation of the case is actually the issue of making sure to restore the honesty so we will take care of that and will work on the investigation of the case. On top of that, I would kindly ask you if you have any additional information that you can provide to us, it would be very helpful for the investigation to make sure that we administer justice in our country with regard to the Ambassador to the United State from Ukraine as far as I recall her name was Ivanovich. It was great that you were the first one who told me that she was a bad ambassador because I agree with you 100%. Her attitude towards me was far from the best as she admired the previous President and she was on his side. She would not accept me as new President well enough.

So, apparently the prosecutor that was relieved according to Joe Biden’s shakedown was actually a force for good and it was his dismissal that translated into a position for Hunter Biden. It reeked of corruption, a lot of people were upset about it and whether Biden is a political opponent or not, the fact that he’s guilty of having used his position as Vice President to facilitate a truly heinous form of extortion is something Trump should be investigating.

The Democrats want to use the above scenario as grounds to impeach Trump.

This is the first paragraph of the Wall Street Journal this past Wednesday:

WASHINGTON – After months of resisting an impeachment inquiry into President Trump, Speaker Nancy Pelosi said the House would move ahead with an “official” effort after reports that the president withheld aid to Ukraine while he was pressing the country to investigate Democratic presidential candidate Joe Biden and his son.”

Within this one paragraph you have multiple layers of falsehoods and exaggerations that leave one scratching their head as far as how in the world you can take the above situation and twist it into something that reflects poorly on Trump.

First of all, to say that Speaker Pelosi has been “resisting” impeachment inquiries is to turn a deaf ear and a blind eye to the witch hunt that has gone on for the last two and half years in the context of the Mueller Report. A report that involved…

Two and a half years of intense investigation inspired by the confident belief that Donald Trump could not have defeated Hillary Clinton without having cheated. And it’s because that he cheated that his administration constitutes a real threat to our democratic process and must therefore be impeached.

The Mueller Report proved impotent, however, in its ability to deliver a credible impeachable offense. If anything, it came dangerously close to indicting Hillary and the Obama administration for its abuse of power when it came to wiretapping and the unmasking of sensitive information in an attempt to discredit the Trump presidential campaign.

In short, we’ve been hearing about “impeachment” almost since the day Trump took office and the accusations have not only proven false, but ludicrous to the point of inspiring many voters who were previously on the fence to now being passionate Trump supporters.

And yet, here comes the Wall Street Journal with the “Impeachment Inquiry Begins” headline.

This is not a “beginning.” It is a continuation of a desperate attempt to recover the political power that was lost when Trump took office.

As you continue to come in contact with the MSM’s “reporting” of the most recent generation of impeachment proceedings, feel free to go out and read the transcript of the conversation between Trump and Zelenskyy for yourself. Trump is doing what he promised to do, as far as draining the swamp, and the fact that the Democrats want to use this as grounds for impeachment reveals their desperation, their corruption and the media’s enthusiastic willingness to support them regardless of how wrong and how sinister they truly are.

Remember Why! Be Sure Your Sins Will Find You Out