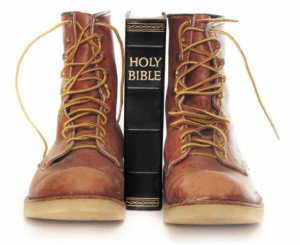 I’m Not Going to Vote

I’ve heard people say we need to “Trust in God for the outcome of the election.” These same folks, in some cases, either didn’t vote or they penciled in their own candidate believing themselves to be pious in the process.

But “trusting in God” should never be used as an excuse to be disobedient. It’s not what God CAN do, it’s what He IS doing. In the context of this election, you had two options and to assert a third that doesn’t exist is not being obedient as much as it’s being presumptuous (meaning that I refuse to engage the situation as is, instead I’m going to insist that God can and should alter the playing field according to my perspective). And to dress up what amounts to a vote that allows for a godless platform to assume the Presidency in the guise of “being spiritual” is not wise, no matter how a person wants to spin it (Prov 29:2).

Another Biblical sounding justification for remaining either disconnected from the political process or hesitant to defend what’s right in the name of being Christlike is the idea of “loving your enemy.” First of all, the Bible is full of admonishments to not just be cordial, but to be genuinely compassionate where your enemy is concerned (Matt 5:43-48; Rom 12:19-21;  1 Pet 3:9). But when your adversary crosses the line that distinguishes the difference between a belligerent individual and a legitimate threat, you’re now interacting with them in the context of justice and a holy obligation to stand up for what is right . In other words, your disposition must now be based on more than one verse, but the whole of God’s Word and from that perspective you have a Biblical basis for stopping them even if it means the use of deadly force (see Sanctified Violence for more information and a list of the applicable verses).

In the context of Politics, loving your enemy is not a mandate to withdraw from the conversation as a way to ensure a rapport that allows for a conversation about their eternal destiny. That isn’t to say that you create tension unnecessarily when the debate revolves around mannerisms and personal preferences. But when Politics becomes a topic that isn’t so much about how people are governed, but an assault on the One that all governments answer to, you’re no longer talking about Legislation as much as you are Desecration.

In the context of Politics, loving your enemy is not a mandate to withdraw from the conversation as a way to ensure a rapport that allows for a conversation about their eternal destiny. That isn’t to say that you create tension unnecessarily when the debate revolves around mannerisms and personal preferences. But when Politics becomes a topic that isn’t so much about how people are governed, but an assault on the One that all governments answer to, you’re no longer talking about Legislation as much as you are Desecration. From that perspective, you need to be engaged and when parties and pundits start promoting laws that contradict Scripture, you need to speak up . Divisions To assume that any kind of division is to be automatically categorized as an unhealthy interaction is to ignore what Paul said in First Corinthians. In verse ten, he says…

Now I urge you, brothers, in the name of our Lord Jesus Christ, that all of you agree in what you say, that there be no divisions among you, and that you be united with the same understanding and the same conviction. (1 Cor 1:10)

If this is where you stop, you’ll be inclined to think that any kind of disagreement needs to be resolved in the context of compromises and concessions. What’s right is secondary to what “works.” It’s more about making people happy that correcting whatever it is that’s wrong. But that’s not all Paul has to say about “divisions.” He goes on to say…

No doubt there have to be differences among you to show which of you have God’s approval. (1 Cor 11:19)

Not everyone is right. You have sinister dynamics being packaged as noble causes. To assume that everyone is on the same moral footing and therefore needs to be accommodated by weakening what otherwise would be a theological given is wrong. In the absence of wisdom, “unity” is nothing more than contamination and you don’t justify a toxic practice as inconsequential anymore than you overlook a lethal wound by saying it was caused by a small caliber bullet. And before you allow yourself to be overly concerned when you hear folks insisting that a community is “polarized” or “divided,” as much it’s about being revealed. There’s a difference between loving your enemy and equipping them. Categorizing any kind of arguing as evil or being un Christlike is to ignore Ephesians 5:11. You don’t expose darkness nor do you champion righteousness by being silent let alone complicit (Prov 18:21; 31:8-9).

Taking a Seat or Taking a Stand

There’s an abundance of spiritual sounding garbage out there right now that has believers taking a seat when they should be taking a stand. And those that are looking for their chair are doing so because they’re buying into a listless faith (Prov 25:26) that wears slippers when it should be an active faith that’s wearing boots (1 Pet 1:13; Jas 1:22; 1 Jn 3:18) . The bottom line is Wisdom (Prov 9:10). Too often, being Christlike is reduced to a perpetual appeal for peace despite the fact that, on occasion, it is a call to arms (Ecc 3:8). There is an element within the church that processes Christ’s command to love one another as a way to justify either a tacit encouragement of wickedness or simply remaining silent altogether. Neither of those two things are justified in Scripture. We’re commanded to reprove that which is bogus in Ephesians 2:11 and to “..rescue from the hand of the oppressor the one who has been robbed.” (Jer 22:3 [see also Psalm 72:4]). In other words, you speak up when you see something evil and you stand up for what is right.

In effect, you have two kinds of believers. There’s the kind that pads around the house all day in biblical sounding slippers. They’re forever encouraging believers to remain at a distance from the tension that characterizes the struggle between good and evil (Is 30:10-11). And then there the believer whose faith wears boots and doesn’t shy away from the dust that is kicked up when accuracy is revealed as insufficient when compared to the Truth (Matt 4:5-7). To be wise is to be balanced (Ecc 7:16-18). Yes, you love your enemy but not in a way that enables them (Dt 7:1-2; Ps 26:4-5; Matt 5:43-48). Yes, you are kind, but not at the expense of Justice (1 Cor 5:13; Eph 4:32). Yes, you ignore insults, but you fight evil evil and those that promote it. (Ps 18:30-40; Matt 5:39 Lk 22:36). In short… You wear boots and not slippers.

Because That's What You've Been Told What Do You Do?