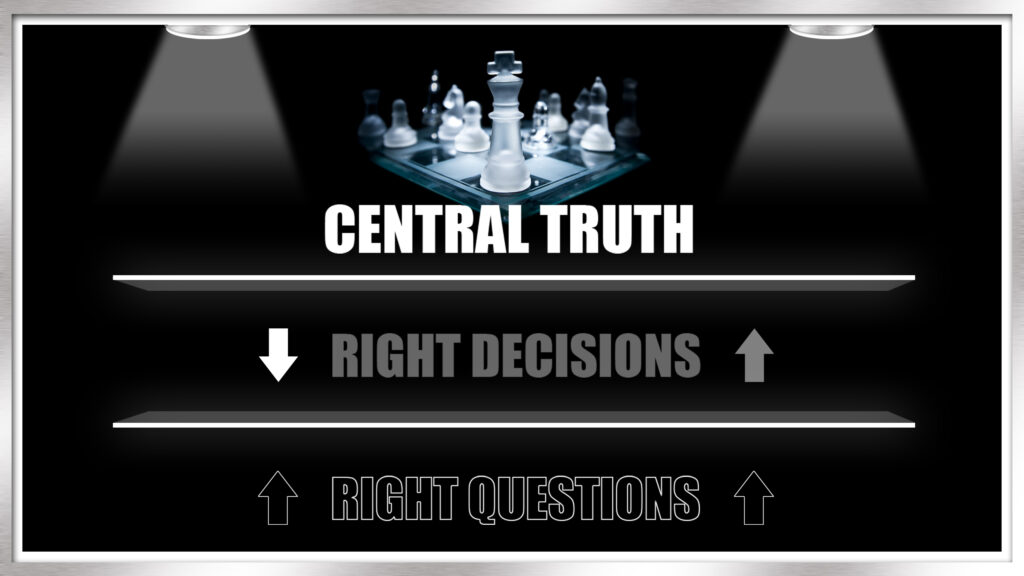 It Can be Overwhelming

Being able to sort through all of the headlines and subject matter experts can be overwhelming when you’re trying to figure out who’s who and what’s what, especially when everyone insists that they’re right and everyone else is just trying to catch up.

But there’s a tool that you can use that brings a substantial amount of clarity to whatever it is you’re trying to process called, “The Central Truth.”

The idea is that every issue has at its core a Central Truth – the bottom line that needs to be prioritized in order for the right decision to be made.  In Part I of this series we looked at how by identifying what it is that’s most important, you’re able to prevent noble sounding tangents from distracting you from that one thing that’s more important than anything else.

But in order for this to work, you first have to identify what Truth actually is.

Regardless of how obvious it may appear, not everybody defines Truth in the same way. Bear in mind, we’re not talking about the way in which philosophers have pondered and debated the meaning of Truth. Rather, we’re looking at Truth as being the conclusion you arrive at after a comprehensive evaluation of all the facts. For the sake of our conversation here, we’ll call it “Perfect Accuracy.”

You can answer a question correctly without being completely honest and you can be honest without telling the whole truth. This is part of the reason why people differ when it comes to the way in which Truth is defined because of the way the facts being considered can be limited to a collection of carefully selected soundbites – bits and pieces of credible sounding data that are presented in a way that’s designed to make a flawed perspective appear both complete and irrefutable.

In order to arrive at “perfect accuracy” you have to engage in a comprehensive evaluation of all the facts, as opposed to a manipulation of just some of the facts. And you can’t dismiss any one piece of data as irrelevant just because it doesn’t line up with your philosophical preferences.

Again, it has to be a complete assessment of all the information and it’s going to be in the context of the questions that are being asked that will reveal whether or not the person posing the questions is focused on the Central Truth or is resolved to promote a different reality and the subsequent lie that serves as its theme.

If you go back to the example we looked at before in Genesis 3, the “Central Truth” was that God had said not to eat from the Tree of the Knowledge of Good and Evil. That’s what needed to remain front and center in order to ensure the right choices were being made. And in order to make the right choices, you have to ask the right questions because otherwise you get drawn into a line of thought that sounds reasonable, but nevertheless runs contrary to the bottom line.

When Satan approached Eve, he began by asking what it was that God had commanded pertaining to the Tree of the Knowledge of Good and Evil. He didn’t reference that tree specifically. Rather, he begins by implying that God had told her not to eat from any tree…

Now the serpent was more crafty than any of the wild animals the Lord God had made. He said to the woman, “Did God really say, ‘You must not eat from any tree in the garden’?” (Gen 3:1)

Right out of the chute you have an unspoken element of “unfairness” being introduced into the equation – the idea that God has prohibited both Adam and Eve from eating any of the fruit from any of the trees in the garden. Satan has set the table, now he serves the main course:

4“You will not certainly die,” the serpent said to the woman. 5“For God knows that when you eat from it your eyes will be opened, and you will be like God, knowing good and evil.” (Gen 3:4-5)

He began by implying that God was unreasonable, now he builds on that by stating that God is fearful of Adam and Eve’s potential, which translates to God being insecure and even antagonistic.

It’s a bogus assertion, but do you see how it grew out of the initial question that was asked?

You have to ask the right questions in order to make the right decision. And the right decision is validated as such by the Central Truth that represents not only what it is that you’re needing to do, but also the reason why you need to get it done.

Up to this point, the illustration of the Garden of Eden and the way in which Satan used an obviously calculated question in order to compromise the absolute nature of the Central Truth works well because of the way the Central Truth is so clearly defined and very few would dispute God’s instructions as being fair and even generous.

But when you get into Moral Issues, the Central Truth becomes a source of contention in some instances because of the way some want to position themselves as their own moral authority.

If one’s happiness and health is established as the Central Truth, both the decisions and the questions that support those choices are easily established and answered in a way that provides the individual the ethical endorsement they need to engage those behaviors and shrug off any criticism as being inappropriate and even cruel.

But if Truth is going to be defined as “perfect accuracy” that’s determined by a comprehensive evaluation of all the facts and not just those that cater to one’s personal preferences, even if you don’t believe or agree with the Substance of Scripture, you have to at least acknowledge the way in which the Bible utterly condemns both practices.

This is where the “Central Truth” often becomes a volatile topic of discussion because you’re not just questioning a person’s logic as much as you’re challenging their authority to define for themselves the difference between right and wrong.

And while this tension surfaces primarily in the context of moral issues, it’s often at the root of the disagreements that happen in Politics, Medicine and even in the Economy.

Like what’s already been mentioned, you have to ask the right questions in order to make the right decisions. But even before you ask, “What’s the problem?” You first have to ask, “Who’s in charge?”

We’ll look at that in Part III…